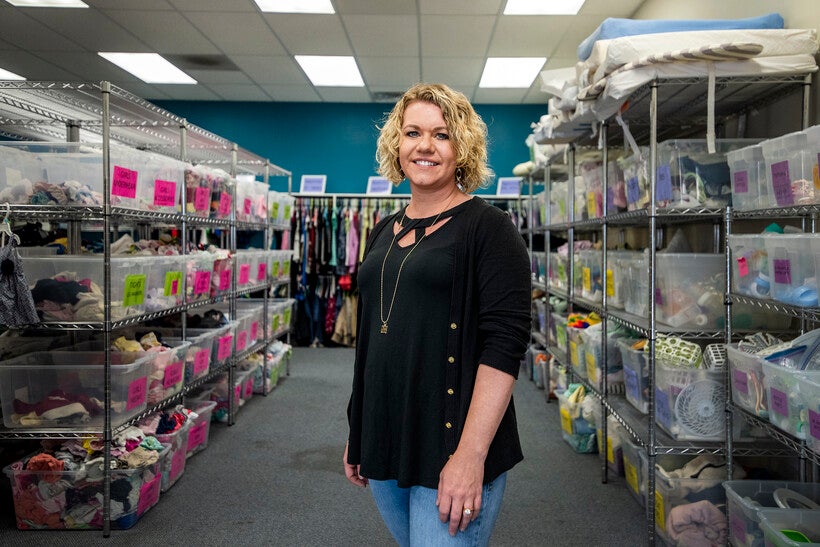 Executive Director Brenda Collins stands inside of Babies and Beyond, a nonprofit pregnancy center, on Tuesday, Aug. 30, 2022, in Madison, Wis. Angela Major/WPR

In post-Roe Wisconsin, nonprofit pregnancy centers say they’re filling a need and want to expand. Experts say they're not adequate.

What resources are there for pregnant people and families in need?
By Bridgit Bowden
Share:

When the U.S. Supreme Court overturned Roe v. Wade in June, virtually all legal abortion in Wisconsin stopped due to a 1800s-era abortion ban that remains on the books in the state.

This prompted one listener to ask WPR's WHYsconsin what resources exist for pregnant people in Wisconsin.

"I generally identify as pro-life but I am concerned by the vacuum that overturning Roe v. Wade has caused," she wrote. "I would love to know what pro-life and other organizations are going to do to support the reproductive rights for women. You can't take something away without replacing it with something else."

Pregnant people and children of young parents have had a growing need for services, advocates say, because of the pandemic's toll and costs associated with inflation. Some nonprofit organizations aim to fill this gap, but experts say they aren't adequate in helping vulnerable people during and after pregnancy.

'Families are going to need help'

Babies and Beyond in Madison, formerly known as Pregnancy Helpline of Madison, is open three days a week, giving out diapers, formula, food, clothing and other goods to parents and expecting parents in need.

On a late September day, staff member Ebon Derks was checking clients in and playing with their kids. Derks first came to the diaper bank as a client after becoming pregnant with her now 9-month-old daughter.

The number of people coming in for help has been growing throughout the pandemic, she said.

"The first of this month, the line was out our door and in the parking lot for probably 45 minutes," she said. "We just could not keep up because the need was so high." 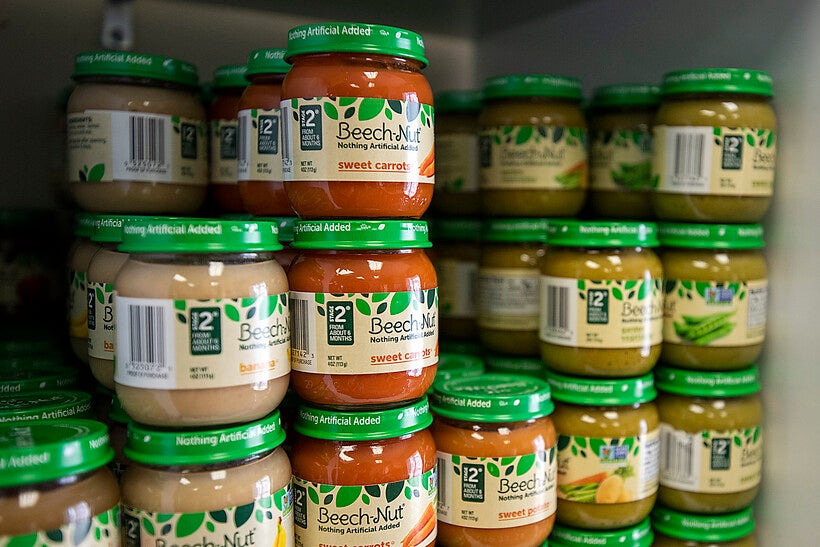 Baby food is kept on a shelf at Babies and Beyond on Tuesday, Aug. 30, 2022, in Madison, Wis. Angela Major/WPR 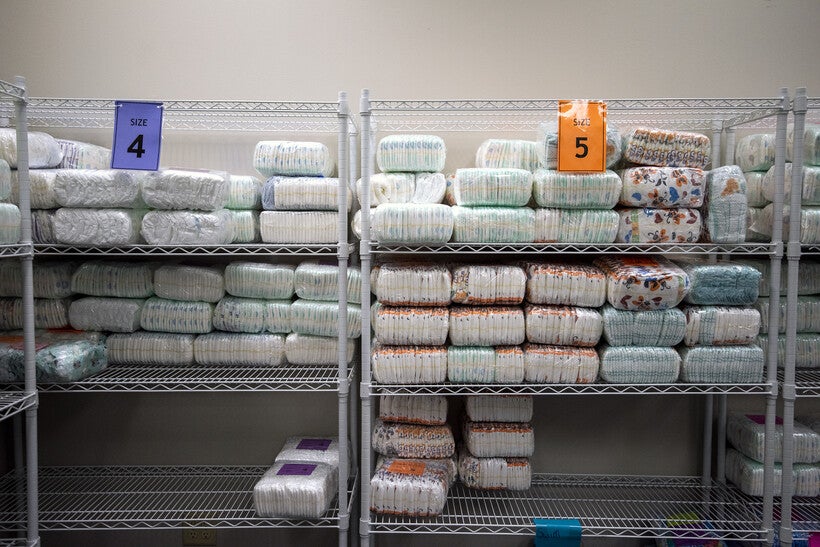 Diapers are sorted on shelves at Babies and Beyond on Tuesday, Aug. 30, 2022, in Madison, Wis. Angela Major/WPR

Derks greeted Alyssa Duncil as she came into the center with her toddler and 11-month-old. She came to get pull-ups, diapers and clothes. According to the National Diaper Bank Network, one month of diapers for a single child costs approximately $80.

Her rent has gone up a lot in the last few years, Duncil said, making resources like this vital for her family.

Babies and Beyond Executive Director Brenda Collins said they've seen more and more people in need through the pandemic. They're now serving more than 500 clients each month. And, she expects to see that number continue to grow due to Roe v. Wade being overturned, and most legal abortion services in Wisconsin ending.

"I think naturally that's the way it's gonna go," she said. "Families are going to need help."

Collins said Babies and Beyond focuses on material needs such as diapers and clothing.

"When you're facing an unplanned pregnancy, one of the first things you're thinking of is 'I don't have the stuff for them, how am I going to provide for this child?'" she said. "And that's where we can come in and help with that, and ease some of that burden and that stress."

Pregnancy centers, with an anti-abortion stance

Collins calls Babies and Beyond a "pro-birth" organization. It's part of a network of groups commonly referred to as "crisis pregnancy centers," or "pregnancy resource centers" that oppose abortion.

The services offered by these centers vary greatly. Some do ultrasounds, pregnancy testing, or counseling. What they have in common is their opposition to abortion.

Katrina Kimport, who studies crisis pregnancy centers at the University of California, San Francisco, said historically, that has been their primary objective.

"The logic of these centers when they first started was the idea that one-on-one interaction could persuade somebody to continue a pregnancy," she said.

Although Babies and Beyond is not affiliated with any religious groups, many other pregnancy centers are. 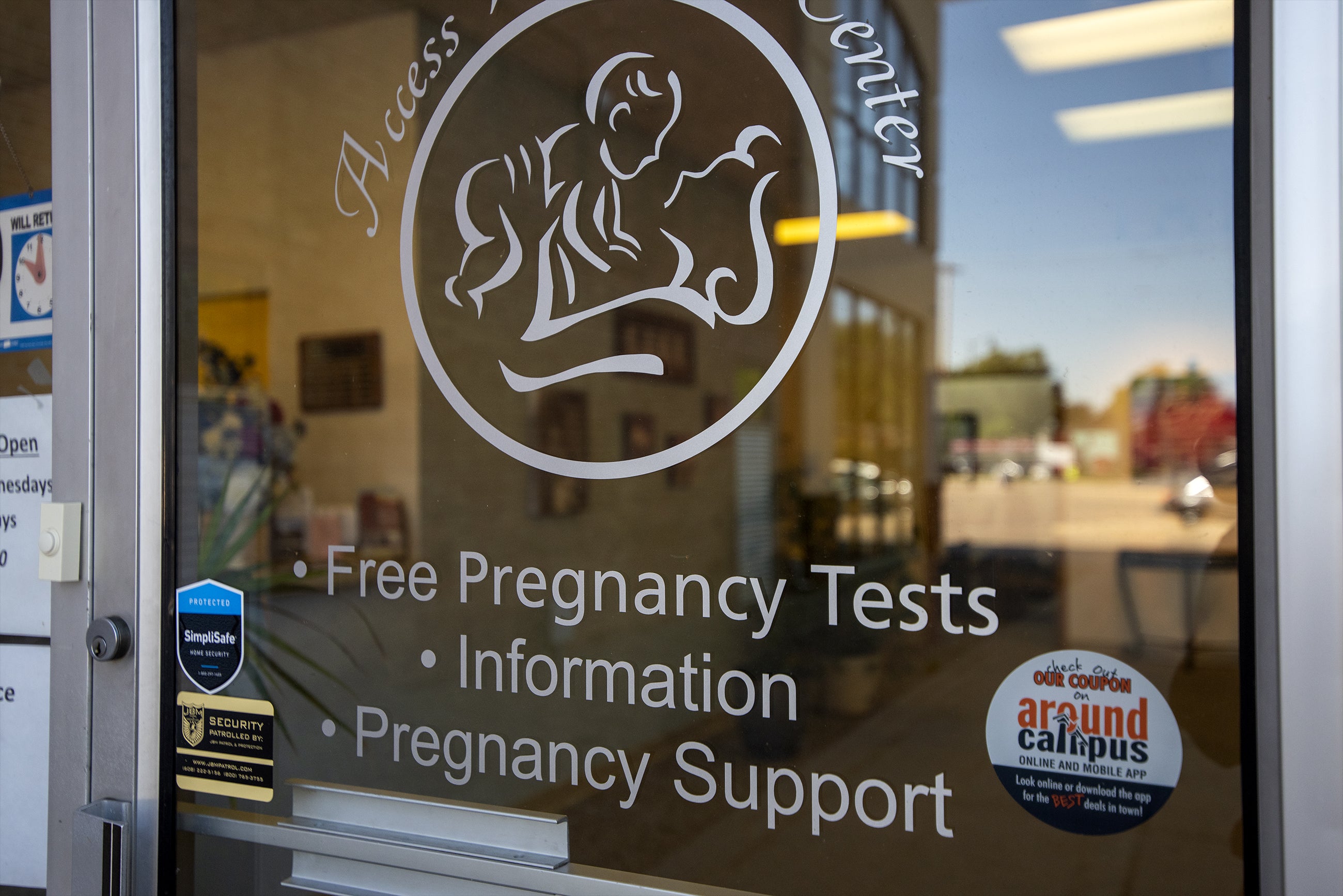 A consultation room inside of Access Women's Center on Tuesday, Aug. 30, 2022, in Madison, Wis. Angela Major/WPR

Access Women's Center in Madison, which is affiliated with the Baptist church, is tucked on the side of a shopping center on the city's east side.

Inside the center, the walls are decorated with Bible verses. The center offers pregnancy testing and parenting classes, said the organization's director Stephanie, who declined to share her last name because of concern for her safety. Clients earn "mommy bucks" when they complete activities like going to Bible studies, bringing a friend, or watching certain DVDs. This fake money can be used to "purchase" items like baby clothes and furniture, which have been donated to the center.

Even before the fall of Roe v. Wade, the center would not refer people for abortions, Stephanie said. That means they would tell clients abortion was an option, but they wouldn't explain things like where they could get one, how to make an appointment, or how much it would cost.

"People have phones, they can Google," Stephanie said. "It's at their fingertips if they really want it." 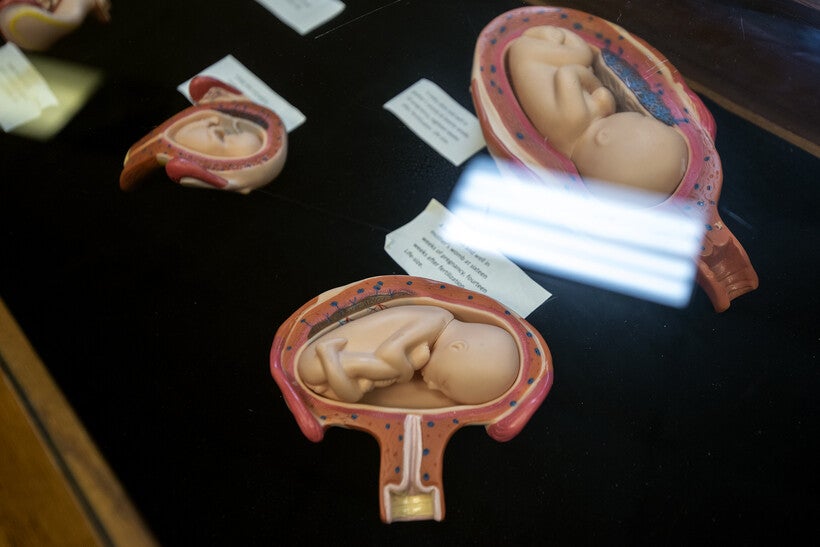 Figures are displayed inside a glass table in the entryway of Access Women's Center on Tuesday, Aug. 30, 2022, in Madison, Wis. Angela Major/WPR

Stephanie maintains that the center is not a clinic or medical facility. But, she would like to expand in the future.

"I would love to move forward with ultrasound machines," she said.

A number of centers across the country offer ultrasounds, Kimport said, adding that it shouldn't be a substitute for adequate medical prenatal care.

"It is not grounded and rooted in the experiences of people who are focused on meeting the needs of these populations," Kimport said. "It is coming from an outside perspective, rather than working with experts in health and health care delivery." 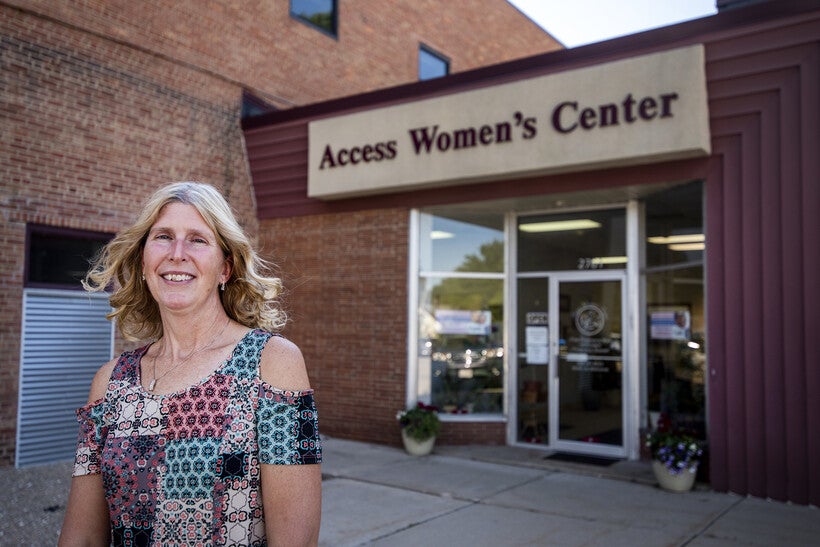 Wisconsin Right to Life Executive Director Heather Weininger calls pregnancy centers "the best-kept secret that shouldn't be the best-kept secret." Now, she said she hopes they can expand with potential financial support from the state.

"We'll work through the state Legislature on some of the funding," she said. "Donors are stepping up and offering more support during these times to the centers as well, but it really becomes a community effort here now."

Kimport said it's not unprecedented for government money to go to these centers. The Associated Press estimates nearly $89 million has been allocated to pregnancy centers across the country from various state budgets this fiscal year. 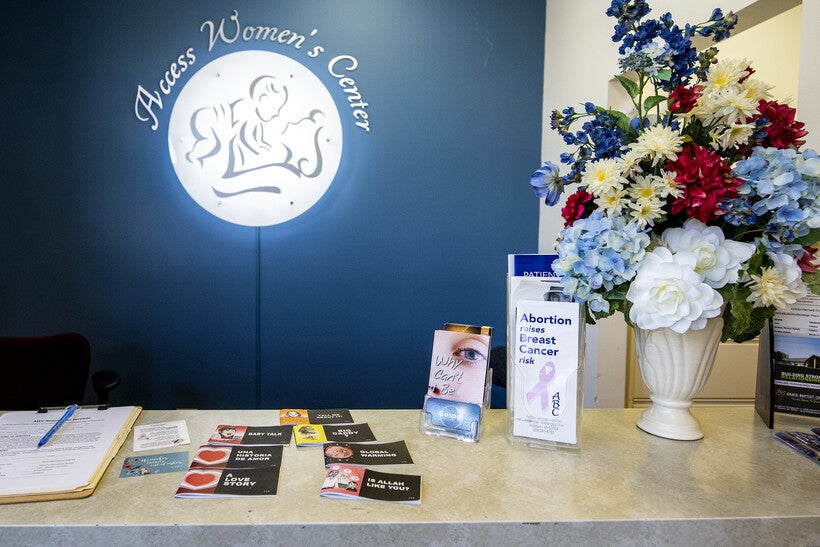 Pamphlets are displayed on a counter at the entrance to Access Women's Center on Tuesday, Aug. 30, 2022, in Madison, Wis. Angela Major/WPR

Crisis pregnancy centers have been known to spread information that goes against science, Kimport said, such as the idea that having an abortion causes mental health issues.

"When we think about these locations as sites within an anti-abortion movement and really informed by an anti-abortion ideology, they have been a very successful source of misinformation around abortion," she said.

Most of the people Kimport interviewed for her 2020 study had already decided not to end their pregnancies before going to the centers — and most of them reported having a positive experience.

But, she said the limited services offered by nonprofit pregnancy centers are not a substitute for a social safety net. Regardless of the legal status of abortion, pregnant people and parents of young children need significant resources like food, clothes, diapers, health care and child care.

Although they are not performing abortions, Planned Parenthood's Wisconsin clinics are still open and providing other services such as STD testing, birth control, pregnancy testing and postpartum care.