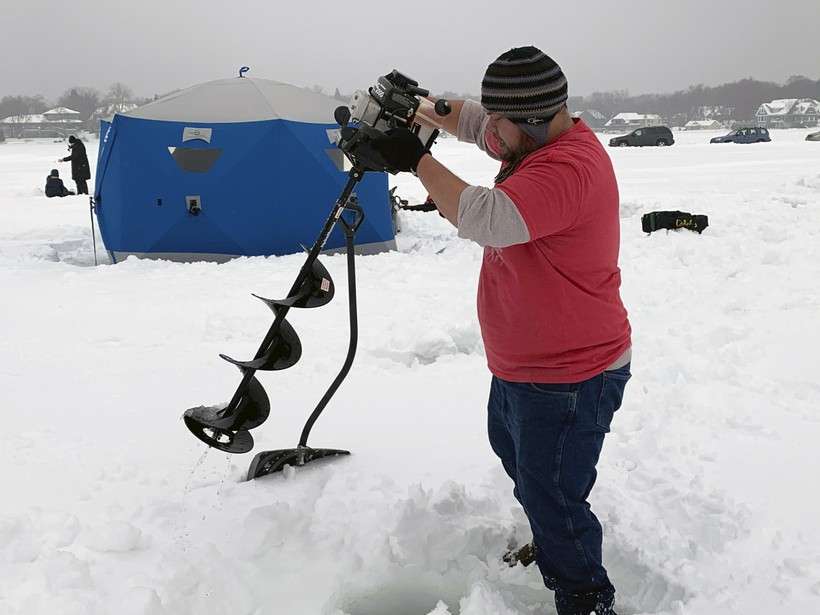 Jason Kong uses an auger to drill holes in Lake Minnetonka in Wayzata, Minn., as he prepares to go ice fishing on Feb. 23, 2019. Since 1970, Minnesota's winters have been warming at a rate of more than 1 degree a decade. State residents notice the change, and say winter isn't as cold as it used to be and the snow is less predictable. Jeff Baenen/AP Photo

With high waters on the Mississippi river and significant snowpack in northern Wisconsin, conditions for ice fishing have been less than ideal this winter.

Brett Jolly is a fishing guide from Green Bay. He normally takes out ice fishing trips in northern and central Wisconsin.

But Jolly said conditions have been so poor on area lakes and rivers, he’s not taking on any clients this winter.

He said the season started with several inches of good ice, until central and northern Wisconsin were hit by several snowstorms.

"With that heavy snow on thin ice, it created some pretty bad conditions. You get that snow creating kind of an insulating layer where the ice doesn't grow very well. Plus, all that weight pushing down pushes water up and you end up with a bunch of slush on top of the ice," Jolly said.

Jolly said that layer of snow and slush makes it difficult for anglers to walk, while thin ice underneath has kept people from driving trucks or ATVs.

In Wausau, an SUV fell through ice on the Wisconsin River on New Year’s Day. No one was reported injured in the incident, according to WAOW TV.

"The problem is people go on memories of past and 'oh yeah I can drive through there.' Well, every year is different and you've got to get out and check the ice," Jolly said. "Don't go anywhere people haven't already been and just be smart. Don't let alcohol make your decisions for you."

On the western side of the state, anglers along the Mississippi river have also seen abnormal ice conditions.

Meghan Jensen is a conservation warden for the state Department of Natural Resources in Trempealeau. She said precipitation across the state has raised water levels on the Mississippi River.

"The water is coming up and over the ice in some areas," Jensen said. "So the ice conditions this year have been a little bit more unpredictable than maybe traditionally in years past, just because of the weather we’ve been having and then the fluctuating water levels."

But Jensen said she’s not ready to call it a trend.

"We’re still early in our season to make an accurate comparison to last year," Jensen said. "Ice fishermen are getting out on the ice this year. From my observations and talking with ice fishermen, some of the areas aren’t as thick as maybe they have been in the past at this time."

"As long we don't get any more snow in the near future, I think some of these lakes will get a little more solid," Jolly said. "But if we get dumped on with another 10 to 20 inches of snow on top of what we have right now, it's going to be a pretty nasty winter for ice fishing."

For now, he said there are still anglers getting out on smaller lakes and low current areas.