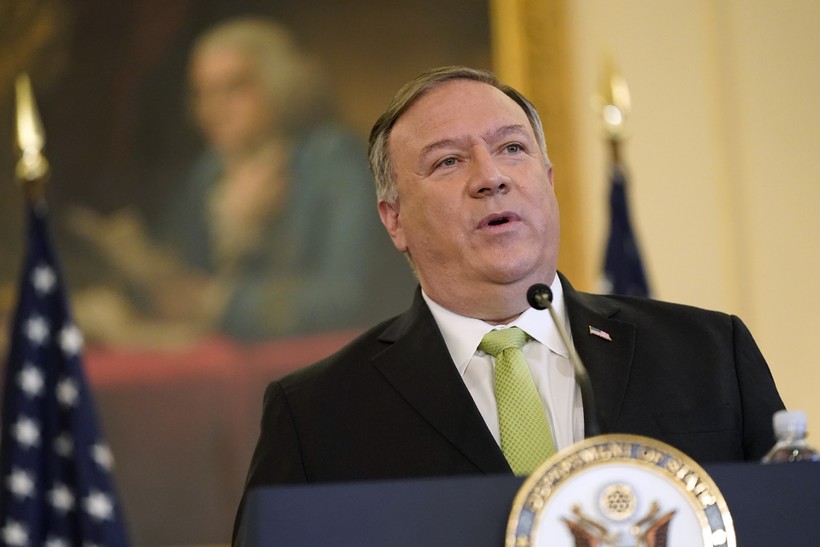 U.S. Secretary of State Mike Pompeo speaks during a news conference to announce the Trump administration's restoration of sanctions on Iran, Monday, Sept. 21, 2020, at the U.S. State Department in Washington. Patrick Semansky/AP Photo

It was the first time a sitting U.S. Secretary of State has visited the state Capitol, according to the Wisconsin Historical Society and nonpartisan Legislative Reference Bureau.

Pompeo spoke before a group of Republican state lawmakers, warning them about the dangers of Chinese interference in state government, U.S. politics and the economy.

GOP members of the state Senate attended the event, as well as a handful of state Assembly Republicans. Democrats were invited, but declined to attend, criticizing the speech as an opportunistic political event on behalf of the president.

During his roughly 20-minute speech, Pompeo urged lawmakers to be vigilant against efforts by Chinese diplomats to push what he called a "coordinated propaganda campaign" to state lawmakers.

"Much of that activity revolves around pressing state governments not to recognize, trade with, or otherwise engage with Taiwan," he said.

He also said representatives of the Chinese government have attempted to push propaganda about China’s response to the COVID-19 pandemic and stoke racial tensions in the U.S. by pointing out a recent spike in racist attacks against Asian Americans.

"They try to shape the storyline," Pompeo said. "They want you to believe that America’s righteous anger at the (Chinese Communist Party) over its handling of the coronavirus has something to do with race."

Wisconsin police have said potential hate crimes against Asian Americans have increased amid the pandemic.

Pompeo also defended the Trump administration’s trade war with China, which has led to higher tariffs on some Wisconsin products and higher prices on some consumer products.

In late 2019, a free trade group estimated the tariffs had cost Wisconsinites more than $800 million in additional taxes.

The secretary said Trump was "mindful that (the trade war) had an impact on American business as well — to the good for some, to the detriment for others."

"We have to flip the nature of the relationship (with China)," Pompeo said. "And if there are costs in the short run, I am convinced that most Americans are prepared to say I’ll do that, it’s the right thing to do."

"Now is not the time for photo lines with Trump Administration officials, political speeches using public dollars, or scapegoating China for Republican’s own failures," said state Sen. Chris Larson, D-Milwaukee, in a prepared statement. "As Secretary Pompeo remarked in his speech, our senate chamber is beautiful, and deserves far more than to be used as a political prop."