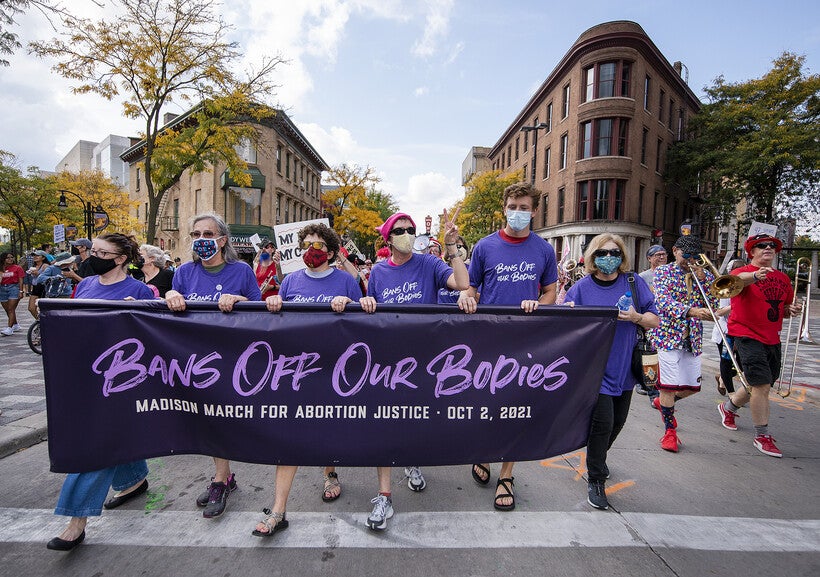 A group of protesters hold a banner as they march down State Street on Saturday, Oct. 2, 2021, in downtown Madison, Wis. Angela Major/WPR

A new national poll from the Marquette University Law School found a majority of Americans support legal access to abortion, but are split on new abortion restrictions being considered by the U.S. Supreme Court.

The poll also found that the public's support for the High Court has declined significantly in the past two years, and most people say its decisions are driven mostly by politics, not the law.

The poll was conducted in mid-January, and released Wednesday morning. Hours later, reports emerged that liberal Justice Stephen Breyer plans to retire, giving Democratic President Joe Biden an opportunity to appoint Breyer's successor. The move will likely only raise the profile of the Court among political partisans as the justices take on highly-charged cases involving the right to abortion, gun rights and race-based preferences in college admissions.

The finding that most Americans oppose overturning Roe v. Wade, the landmark 1973 case that legalized abortion, is not new. Polling by Marquette and others has consistently found majority support for legal abortions, especially in certain cases.

"There are very large majorities who think there should be a right to abortions under some circumstances (such as) the life and health of the mother, rape or incest," said Charles Franklin, director of the Marquette poll. "But then support falls off and becomes more of an even split."

Among respondents to the poll who had an opinion on Roe v. Wade, 28 percent favored overturning the decision and 72 percent opposed it.

The Supreme Court heard arguments Dec. 1 in a challenge to a Mississippi law that bans abortions after 15 weeks. Upholding that law would mean overturning the key finding in Roe, which is that women have a constitutional right to abortion in the first two trimesters of pregnancy.

But public opinion does not appear to see upholding the Mississippi law as equivalent to overturning Roe. Forty-nine percent of respondents said they favor upholding the 15-week abortion ban, and 51 percent oppose it.

"We see people more willing to accept a significant increase in the limitations on abortion, even as nearly three-quarters say they don't want Roe stricken down completely," Franklin said.

The makeup of the U.S. Supreme Court has been bitterly contested in recent years. Following the death of conservative Justice Antonin Scalia in 2016, Republicans in the U.S. Senate held open the seat rather than allow Scalia's successor to be appointed by Democratic President Barack Obama. Republican President Donald Trump appointed Justice Neil Gorsuch to succeed Scalia in 2017, and in 2018 appointed Justice Brett Kavanaugh after the retirement of Justice Anthony Kennedy. In 2020, liberal justice Ruth Bader Ginsburg died at age 87, and Republicans in the Senate rushed the appointment of conservative Justice Amy Coney Barrett in the final months of the Trump administration.

While this poll was being conducted, the Supreme Court struck down the Biden administration's vaccine-or-test mandate for employees at large companies. Marquette found a majority — 54 percent — supported the mandate, while 45 percent opposed it. 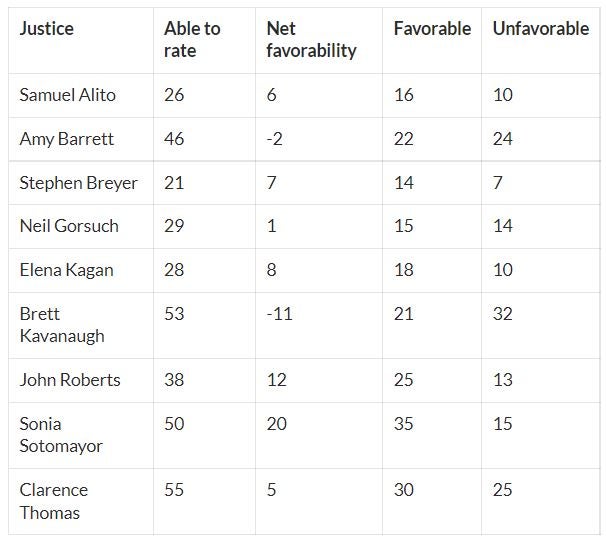 Supreme Court justices serve for life, and the U.S. Constitution intentionally insulates the Court from political considerations. But liberal and conservative justices alike have expressed concern about maintaining the legitimacy of the Court in the eyes of the public. The Marquette poll's findings of the favorability ratings of different justices show that, while many people did not have opinions about individual justices, the trend in approval showed that more recently appointed justices were rated less favorably.