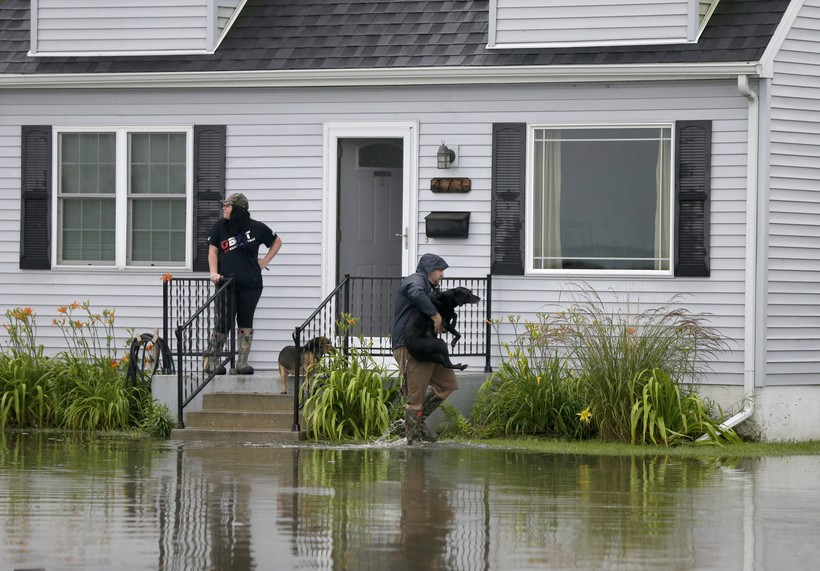 Jason O'Donnell carries his dog over the flood water in front of his house as his wife Dee O'Donnell looks on at their home on Pine Street in Burlington, Wisconsin, on Wednesday, July 12, 2017. Mike De Sisti/Milwaukee Journal Sentinel

Authorities say nearly everyone in the Racine County community of Burlington is dealing with some type of flood damage on Thursday.

Police Chief Mark Anderson said flooding in the city of about 10,000 is "massive" and "unprecedented."

High water and lack of electricity remain a sizable concern in downtown Burlington as flooding continues. The city's four bridges across the Fox River remain closed because of the high water level.

The river crested at about 16 feet around midnight Wednesday, said meteorologist Ben Miller of the National Weather Service in Milwaukee. That's more than 5 feet above flood stage.

"We're a good 4 feet above the previous record," Miller said. "Major flood stage on this particular point is at 14 feet, and it is expected to remain above major flood stage into early next week."

The river is expected to recede slowly in Burlington and other areas affected by flooding. The ground in the area was already saturated thanks to frequent rain in spring and early summer. Forecasters expect the river to crest Thursday evening further south near New Munster. Water levels there between Racine and Kenosha counties could be more than 17 feet.

"The soil conditions prior to the event have a lot to do with how fast or slow a river falls," Miller said. "Normally, you need pretty wet soils to get an event like this, and that was the case. We had a fairly wet spring, and in that area we had 1 to 2 inches that fell Monday night, so the soils were pretty saturated."

About 6 inches of rain hit Burlington early Wednesday morning, causing flooded basements. Many businesses and homeowners are pumping water out of basement and throwing out flood-damaged items.

Burlington homeowner Rick Janish is one of those with a flooded basement and no electricity.

Because a WE Energies substation is submerged in floodwater, thousands of people in the area without power might not have electricity restored until Friday afternoon.

"We've got a chest freezer downstairs. It's floating," he said, adding that a lot of the food at the bar will be thrown away.

The Wisconsin National Guard blocks part of a road closed to traffic from flooding in this photo taken Thursday, July 13, 2017. Chuck Quirmbach/WPR

Gov. Scott Walker toured the area Thursday morning urging safety and patience while people wait for the power to come back on. He also asked people to document any losses and damages in case the area qualifies for a federal disaster declaration, which would trigger financial assistance.

After the Republican leader surveyed the damage in the community located in his home district, Ryan said "We're just going to make sure everybody has what they need, and that should the federal government threshold be met, we'll be here to to make sure the response is there."

Ryan said qualifying for help from the Federal Emergency Management Agency is a data-driven process.

Some people have expressed frustration in Burlington over the electricity not being restored by Thursday evening. Ryan said the utility WE Energies is working hard, but must proceed safely after the flooding from the Fox River knocked out the power substation.

"I know people are frustrated they haven't had power put on yet, but know that WE Energies is doing all it can to get the power on. There's a safety issue involved in that," Ryan said.

On Thursday, Walker also declared a state of emergency in Kenosha, Racine, and Walworth counties because of widespread flooding. The Wisconsin National Guard has sent about 100 soldiers to Burlington to help the community recover and assist local officials with traffic control, health and welfare checks and sandbagging.

"They're working on the bridges in Burlington, trying to keep people clear of those areas and keep them from venturing into unsafe areas," said Wisconsin National Guard Capt. Joe Trovato. "They've also started conducting health and welfare checks for people who may have been affected by the floods."

Soldiers will also complete checks "for those facilities, large-scale apartment-type facilities and other complexes that have a large volume of senior citizens in particular," Walker said.

"There's effort to do person-to-person contact to make sure they're safe, and then those are areas of priority to get generators," Walker continued.

The Wisconsin Department of Corrections is also sending about 20 inmates from the Robert Ellsworth Correctional Center to help with sandbagging.

Water rescue teams from Ozaukee, Milwaukee, Lafayette, and Rock counties have traveled to Burlington to assist if needed.

Roads and highways are closed throughout Racine, Kenosha, Walworth and Waukesha counties, according to the Wisconsin Department of Transportation.

Mary Jo Thomsen lives on a farm in the nearby Town of Lyons in Walworth County. She said too much water is a problem there, too.

"Because we're big hobby farmers and I can't even look at all of our gardens. I haven't been able to look. It's sad."

Thomsen said she also worries high water in a creek will wash out a bridge that's part of her  driveway.

Railroad tracks escape being covered by water Thursday, July 13, 2017 from the storm that rose water levels to an unprecedented level in Burlington, Wisconsin during a storm Tuesday into Wednesday. Chuck Quirmbach/WPR

The mayor of Burlington in Racine County ordered a 10 p.m. curfew Wednesday after rain caused record flooding on the Fox River. Officials urged county residents along the river to evacuate for the night as the water continued to rise.

Flooding also forced the evacuation of a mobile home park in Kenosha County.

In central Wisconsin, a funnel cloud was spotted 10 miles east of Stevens Point around 8:20 p.m. Wednesday. High winds knocked down trees in Adams County. In the far north, trees and power lines fell in Marinette County, and in the southwest, a metal outbuilding in Viroqua had roof damage.