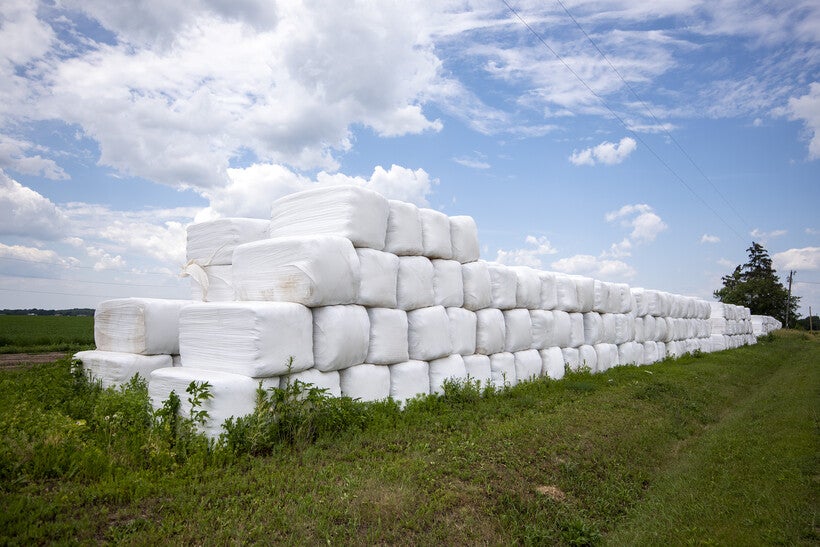 Plastic has made farming easier, but what happens to the material after it’s used?

Many farms want to recycle the plastic used to cover silage and hay, but face barriers to finding programs, complying with rules
By Hope Kirwan
Share:

Madeline Uraneck moved from Oklahoma to Wisconsin 50 years ago. While she’s not a farmer, Uraneck said she’s always paid attention to what’s going on in farm fields as she drives around the state.

"As you go through the beautiful farmland, you notice the changes in farming like from the hay bales to the (round bales) and now silage, especially is in those long rolls covered with plastic," Uraneck said, "And I was just curious: What happens to the plastic when they're finished using it?"

She submitted her question to Wisconsin Public Radio’s WHYsconsin. And recycling advocates and experts say the answer isn’t straightforward.

Melissa Kono is a community development educator in Clark and Trempealeau counties for the University of Wisconsin-Madison’s Division of Extension.

She said farmers use plastic sheeting to protect hay and silage from the elements in order to feed their livestock all winter. Some forms of these plastics include top covers for silage bunkers — think white tarp covering mounds of silage with tires holding the tarp down — long bags that hold long, skinny rows of silage and wrap for individual hay bales.

"Their other option for silage would be a silo and those are very costly to construct," Kono said. "Having a silage pile makes it easier to access, especially if farmers don't have a lot of space, or makes it more accessible to feeding animals, which helps cut down on time and cost. I just think because farmers are stretched so very thin these days, having plastics to use has probably made it more economical."

According to the state Department of Natural Resources, 15 to 20 pounds of plastic are used per cow every year in Wisconsin. Dairy industry experts estimate a 300-head dairy farm that uses plastic silage bags may produce as much as 6,000 pounds of waste plastic a year, according to the DNR.

Kono said farmers struggle with what to do when they're done with the plastic. Most products can’t be reused because the thin plastic breaks down in the elements. And on the farm there’s no curbside recycling bin for people to simply put the sheeting in.

"It's so bulky and it is dirty. It's typically more soiled with feed material and sometimes mud just from being on the farm," Kono said. "There are companies that will recycle it, but transportation costs can be expensive and just the nature of farming, you're out in a rural area, you're not typically close to a place that might accept those types of materials."

Kono said she started working on the issue of recycling after having many dairy farmers ask her what they should be doing with the used plastic. She said some producers put it in their regular dumpsters, but not all landfills will take certain plastics.

"Some farmers do resort to burning it. It is illegal to burn plastics and other materials in Wisconsin, but it's just so difficult and costly to even enforce that, that some farmers just don't know what to do with it, so they end up burning it," she said. 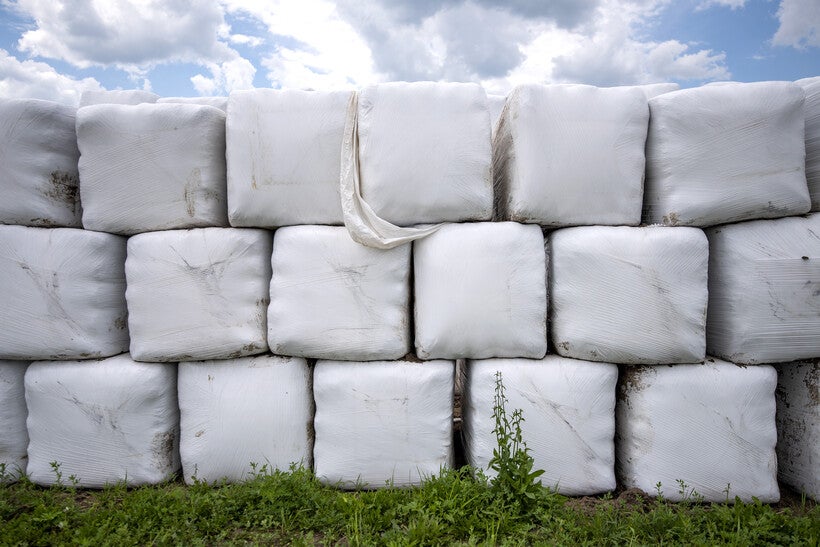 A 2015 survey by the DNR and UW-Extension found taking the plastics to the landfill was the most frequent disposal method, followed by burning.

One company in Wisconsin is working to collect the used plastics from farms and turn it into new products, including more plastics to be used on farms. The company, Revolution, provides free dumpsters to dairy farms around Wisconsin to collect used silage and bunker covers, which are washed and processed into ag plastics, trash bags and plastic grocery bags.

"Out of the Wisconsin area, in the last five or so years, we've diverted over 130 million pounds of those plastics from the landfill and from burning and burying to being used for other products," said Price Murphy, vice president of strategic sourcing and operations for Revolution.

Murphy said they have around 3,200 dairy farms participating in Wisconsin, and they hope to continue to increase that number. But he said recycling ag plastics is not a profitable business right now.

"The material is dirty, it has an aroma to it. We happen to have the technology to use that material, but it's not really sellable outside of our markets at this time," Murphy said. "So to continue to grow ag plastic recycling, the farmers need to focus on purchasing from manufacturers that help them recycle."

He said there aren’t any government grants or programs to help support expanding ag recycling. And he said it's often costly to sort out trash and debris that end up in the dumpsters on the farm.

Even when an option for recycling is available, participating in the programs isn’t always easy for farms.

Haly Schultz and her husband run a sixth-generation farm near Neillsville raising dairy heifers for other farms and producing hay, corn and oats. After taking over the farm from her husband’s parents in 2012, Schultz said they switched from making small squares of dry hay to making "baleage," where still wet hay is wrapped in air-tight plastic sheeting and fermented to preserve it for livestock feed.

"It doesn’t need these two or three full days of drying, which in Wisconsin can get very challenging to have that many days without rain," Schultz said. "It also provides a product that's pretty superior in terms of palatability to animals. So they tend to clean it up better in the winter, they tend to eat it more readily."

To recycle that plastic, Schultz said, they signed up for a dumpster from Revolution. But their farm didn’t use it in the summer months when their livestock are on pasture. So they had to switch to using the company’s "Recapture bags," which hold around 200 pounds of plastic at a time.

Schultz said because the pickup service is free, it’s a low-cost solution for their farm. But she said it’s difficult to find the bags for sale, and she’s had to make a lot of phone calls to stay on as a participant in the program.

Ultimately, she thinks farmers would be willing to pay for recycling if it was easier and more accessible.

"We don't want to find it blowing in the wind and into the woods and down the road and people dumping it in their back 40. We don't want to find that. You know, we're in it for the long haul," Schultz said. "If we could have expanded offerings of what's allowed to be recycled on the farm, in whatever manner, whatever programs that come about, by all means I think there’d be a lot of people that would jump on board.