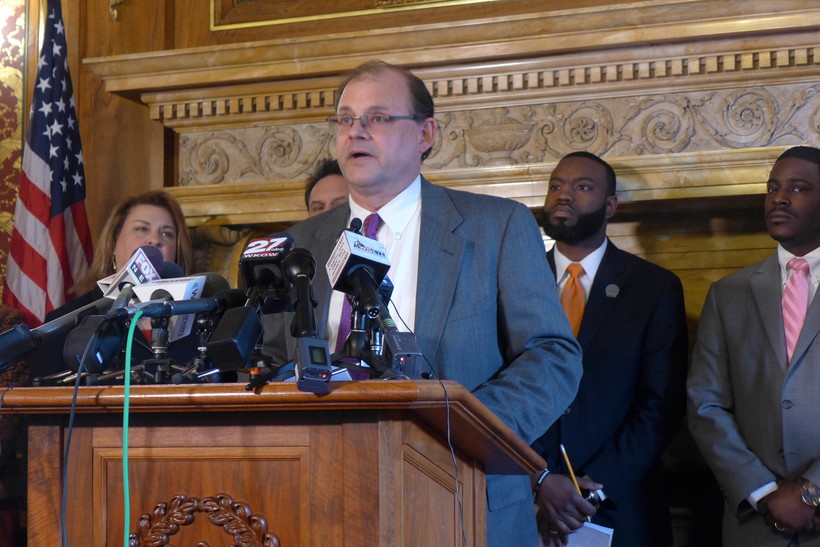 Rep. Michael Schraa, R-Oshkosh, Rep. David Bowen, D-Milwaukee and other legislators from both parties announced a plan Tuesday that would close the Lincoln Hills youth prison by July of 2020. Shawn Johnson/WPR

Plan Would Close Lincoln Hills By 2020, Create Local Juvenile Centers In Its Place

Wisconsin would close its troubled Lincoln Hills youth prison by July 2020 and put counties in charge of many of its juvenile offenders under a plan unveiled Tuesday by a bipartisan group of state legislators.

The proposal follows years of reported abuse of youth inmates at Lincoln Hills, as well as warnings from corrections officers that they no longer feel safe there.

Rep. Michael Schraa, R-Oshkosh, called the plan to decentralize Wisconsin's juvenile corrections system a dramatic transformation. He said he realized changes were needed at Lincoln Hills after he toured the facility with other state legislators.

"It became evident that a number of those juveniles were being failed by the system," Schraa said. "Several of the young men that we spoke with were there for the second or third time."

Joining Schraa on that tour and at the Tuesday press conference announcing this plan was Rep. Evan Goyke, D-Milwaukee, one of the proposal's authors and a longtime advocate for creating regional juvenile correction centers..

This latest bill to close the Lincoln Hills School for Boys and Copper Lake School for Girls in Irma is similar to one Gov. Scott Walker endorsed earlier this year, but it would give county governments more responsibility and more funding to carry it out.

Backers said sending less serious youth offenders to what could be a half-dozen local county-run facilities around the state would be cheaper than having the state build new facilities on its own.

They also said youth would gain more by serving their sentences closer to their families and their home communities.

"As you know, Milwaukee has a majority of the young people that are incarcerated in Lincoln Hills," said Rep. David Bowen, D-Milwaukee. "Especially from Milwaukee County, we are excited that we will be able to repurpose dollars and save dollars while saving lives at the same time."

If the full Legislature and Walker approve the plan before the Legislature adjourns in March, a Juvenile Corrections Study Committee would be formed to recommend potential locations for county "residential care centers." That list would be due by November 2018.

By March 2019, counties would need to submit applications to the state for a grant to create a residential care center. The Juvenile Corrections Study Committee would then offer its suggestion to the Legislature's budget committee by July of 2019.

Wisconsin would close Lincoln Hills by July 1, 2020, though Goyke said it was his hope that the facility would be turned into a drug treatment center for adults.

It was not immediately clear whether Walker supported the latest bill, although his office did not rule it out.

"We are willing to continue working with the Legislature to reform our juvenile justice system," said Walker Press Secretary Amy Hasenberg.

Sen. Majority Leader Scott Fitzgerald, R-Juneau, told reporters that while he liked pieces of the bill, he didn't want to move too quickly on it.

The Legislature plans to adjourn for the year in March.