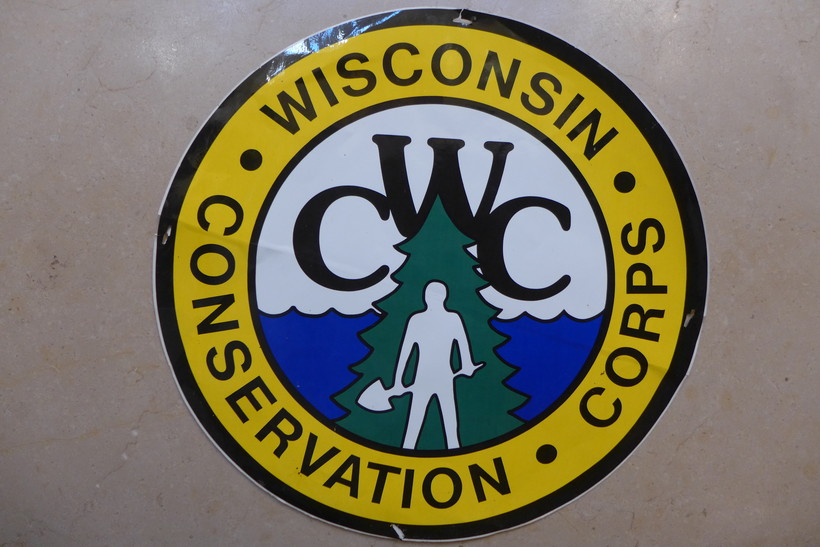 One of the stickers that adorned Wisconsin Conservation Corps projects before the program was ended in 2003. Shawn Johnson/WPR

Wisconsin would revive its long-dormant Conservation Corps under a bill that had a hearing at the capitol Thursday, raising the prospect that the state could again pay young people to build trails, bridges and boardwalks on public land.

The plan by Sen. Robert Cowles, R-Green Bay, would set aside money for workers between the ages of 16 and 25 to work on the projects. Half of the funding would go to crew members who don't have a college education and come from low-income families.

Jerry Derr chaired the board that oversaw the Wisconsin Conservation Corps when budget cuts ended the program in 2003.

"I don't know why it went away," Derr told a panel of state senators considering the bill. "They put young people to work, they gave them a work ethic, they gave them some pride in what they did. They could back away from that project after a year and say 'I was part of building this.'"

Also testifying was Willie Bittner, who said he had just graduated from high school when he joined the Wisconsin Conservation Corps in 2001.

"I was lost where I wanted to go in life," Bittner said.

Bittner said the experience was so rewarding that after Wisconsin's Conservation Corps ended, he traveled to other states working on similar projects and eventually started his own trail-building company.

He now helps run WisCorps, a nonprofit conservation group that could qualify for state funding if this bill becomes law.

"We know that we can do a lot of good for state parks," Bittner said.

Under the bill, conservation projects would have to be on public land.

Local governments, colleges, or nonprofits could apply for state grants as long as they secure half of the funding from other sources.

The bill would also set aside up to $400,000 per year for agencies like the state Department of Natural Resources to pay for projects on state land.

Wisconsin Wildlife Federation Director George Meyer, who is a former DNR Secretary, said state parks could use the help given the DNR's staffing cuts in recent budgets.

"There's a tremendous backlog of land and water maintenance on DNR property," Meyer said. "There was before the major cutbacks in employees and it's just getting worse."

Nobody testified against the plan and no groups have reported lobbying against it, although there's no guarantee that it will pass before the Legislature adjourns in the next few months. Similar efforts have failed in recent legislative sessions.