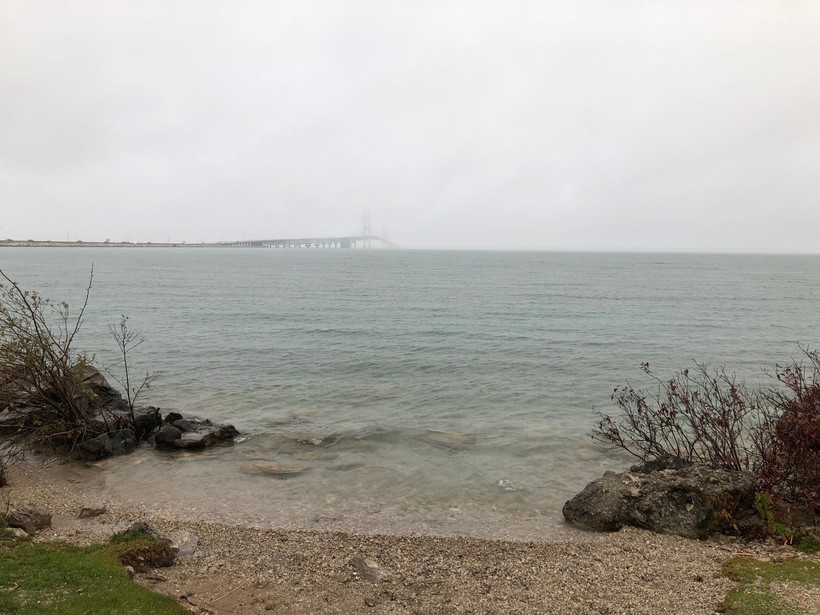 The Mackinac Bridge crosses the straits between lakes Michigan and Huron. Sarah Whites-Koditschek/WPR

An oil and gas pipeline that starts in Superior, Wisconsin and runs through the meeting point of lakes Michigan and Huron may be at risk of a devastating spill while officials move forward with a controversial plan to build a protective tunnel around it.

Canadian energy firm Enbridge, which owns the Line 5 pipeline, estimates the project could take 10 years to complete, leaving opponents to worry that the aging line is being left vulnerable to damage.

Michigan State University scientists have found that because of the unusual currents in the Straits of Mackinac, where the line crosses, a spill could be especially widespread and devastating to the lakes, human health and to wildlife.

Michigan’s incoming Democratic Gov.-elect Gretchen Whitmer ran on a platform to decommission the pipeline, but in the closing weeks of his administration, Republican Gov. Rick Snyder and the state Legislature worked on a deal with Enbridge to construct the tunnel.

"This is the right solution. This is a new chapter for the state of Michigan in protecting our natural resources, in protecting our Great Lakes and our entire way of life," Chatfield told House lawmakers before a vote. But among those who disagree with Chatfield is a group of Native American protesters camping about 20 miles from the Enbridge-owned pipeline in northern Michigan.

Recently, James Pitawanakwat sat in an army tent near a wood-burning stove and talked about his fears for a possible pipeline spill in the Straits of Mackinac.

"When one of them pipes under the water break, it is complete genocide for the Great Lakes," he said. "Our livelihood depends on the currents of that water to bring the fish to us. It’s our way of life."

Instead, under Snyder’s plan with Enbridge, the tunnel would sit 100 feet underground and would enclose the section of pipeline under the straits to prevent a possible leak.

Enbridge will pay an estimated $500 million for the tunnel. Meanwhile, Enbridge says it would increase inspections and deploy more video cameras to make sure ships' anchors don’t strike the exposed line.

"We think it really is building toward the future, and continuing, in the future, to protect the straits and the Great Lakes while continuing to provide that energy that a lot of people in Michigan rely on," said Enbridge spokesman Ryan Duffy.

Critics say a small number of people depend on this oil in Michigan.

Liz Kirkwood of the environmental group For Love of Water, or FLOW, says Enbridge’s tunnel plan hasn’t been well studied. She also said she expects the cost of the project to far exceed Enbridge's estimates.

But Nick Schroeck, a law Professor at University of Detroit Mercy sees a possible out for Whitmer, the incoming governor. He says she or others could sue, arguing the lakes can only be used for certain public goods. But legal action isn't what's first on the minds of the protestors at the camp near the site of the pipeline.

Amos Cloud says a history of past spills show that neither Enbridge or Michigan’s coast guard is prepared for an accident. That’s why he and others at the camp plan to train to respond themselves.

"If we can get two teams on the side, like two containers on either side of the bridge ... when it does spill, we can just shoot right through there, pull the booms out and meet in the middle and contain the oil spill, hopefully," said Cloud.

In the event of a spill, Michigan State scientists found it very unlikely that Wisconsin would see oil-lined shores. The outcome of a spill would depend on currents and weather conditions.