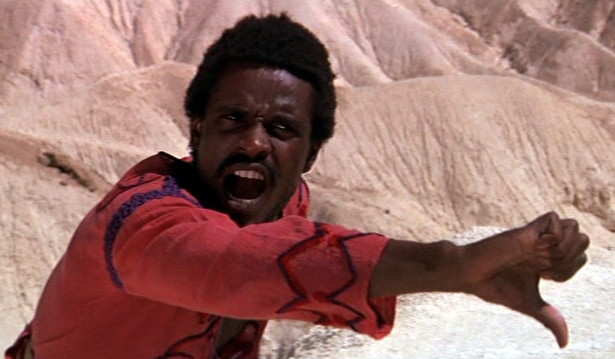 While "Jesus Christ Superstar" doesn't necessarily rival "It's A Wonderful Life" or "White Christmas" in terms of popularity during the holiday season, the film's subject matter make it entirely appropriate during some family down time. And for those who find other religious-themed films like "King Of Kings" or "The Greatest Story Ever Told" a little too stilted or overwrought, "Superstar" is a lighter, more off-beat account of Jesus' life.

And what's not to like in this movie (and to chuckle at). The film was based off a Broadway musical featuring a classic-rock soundtrack and hippie-era style and sensibilities. The cast is peopled by longhairs and the dialogue is melodramatic, hammy and thoroughly entertaining in how Tim Rice and Andrew Lloyd Webber reconcile (often times clumsily) biblical verses with rock lyrics.

But, what really makes the 1973 film something to appreciate for more than its unintentional comedy appears when viewers focus on actor Carl Anderson's performance as Judas Iscariot. Anderson's acting and singing do what many might think unthinkable and/or sacrilegious: Make Judas a more thrilling character on-screen than Jesus.

And Anderson does it starting with the opening song, "Heaven On Their Minds." For his part, Anderson makes a majesty of a rather tangled composition. Weighted down by stringy guitar riffing, overdone piano work and some clunky lyrics, Anderson uses his vocal grit to give "Heaven" an impassioned and unusually sympathetic airing of Judas' perspective. For those few minutes, he makes it seem like the idea of a "rock opera" of the Jesus story could actually work.

In a rock context, Anderson's Judas sees himself as a true believer disillusioned while his friend has become what he thinks is a sellout and succumbed to delusions of grandeur. (And really, isn't this how every rock band breaks up?) Anderson is magnetic as he plays the role of sensitive soul morphning into bitter turncoat. The audience can easily follow Judas' logic.

Ted Neeley, who plays Jesus in the film, can scarcely compete. Neeley appears weighed down by his office and his clumsy lines hardly help with the burden. While Max Von Sydow played Jesus as a sad-eyed wise man and Jeffrey Hunter was a stain-glass rendering come to life, Neeley was a more informal and human Jesus but not for the better. His voice was sometimes shrill and the movie descends to the point that every time Neeley opens his mouth to sing, it promises more whining than salvation.

In an interesting twist, some contemporary complaints filed when the film came out accused the writers and filmmakers of offering too sympathetic presentation of Judas and his point of view. If anyone deserves the credit (or the blame) for this, it's Anderson.

"Superstar" might have been left behind as a relic of the Woodstock years had Anderson's performance not given the film something that transcended the movie's goof-ier elements.