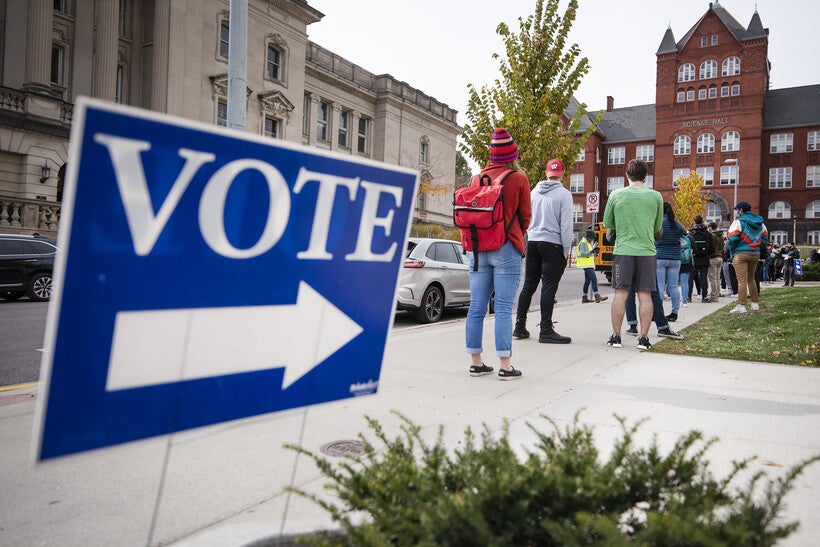 Thousands of sick or disabled voters in Wisconsin could have their legally-cast ballots thrown out if a state lawsuit brought by the Trump campaign over the 2020 presidential election is successful, according to disability rights advocates.

A suit filed in Dane and Milwaukee counties last week by the president’s campaign asks the court to throw out roughly 28,000 ballots cast by indefinitely confined voters in the two counties.

According to advocates, these voters include elderly nursing home residents, people who are living with debilitating medical conditions and individuals who are receiving in-home hospice care.

"People have such tough lives and now it’s just sad that they have to be worried about being able to vote in the future," Beckert said.

Under state law, an indefinitely confined voter is defined as someone who is "confined because of age, physical illness or infirmity or is disabled for an indefinite period." The law allows voters to identify themselves as such by "signing a statement to that effect." It also allows these voters to provide a witness signature as proof of their identity for purposes of voting, rather than a copy of their photo ID.

In its lawsuit, the Trump campaign argues some voters identified themselves as indefinitely confined simply to illegally bypass Wisconsin’s voter ID law. The lawsuit argues incorrect guidance issued by Dane and Milwaukee county clerks in March encouraged people to abuse the law by applying it too broadly during the COVID-19 pandemic. Clerks corrected their guidance that same month, but the lawsuit argues every indefinitely confined ballot requested after March 25 should be considered illegal.

Dane County Clerk Scott McDonell has since argued that because the guidance was corrected and there were several months between March and the November election for voters to be informed, the Trump campaign’s concerns are moot. The Trump campaign argues the March guidance caused damage that couldn’t be corrected.

The Trump campaign has also pointed to a large increase in indefinitely confined voters in 2020 as proof of abuse.

According to Wisconsin Elections Commission statistics provided to WPR, the number of indefinitely confined voters in Dane County jumped from 4,569 in 2016 to 22,519 in 2020. In Milwaukee County, those numbers increased from 11,978 to 45,693.

Beckert said the pandemic may have contributed to the increase because some elderly and disabled voters are more isolated now than they have ever been.

"In normal times, non-pandemic times, they might be able to get help from a family member or a friend (to go vote), but because of folks being in a vulnerable population that’s high risk for COVID, people were much more isolated this year," she said.

Beckert also said voters who would normally struggle to make a trip to the DMV to get a valid ID for voting were even less able to make the trip in 2020.

Opponents to the Trump lawsuit have also pointed out that indefinitely confined voters didn’t only exist in Dane and Milwaukee counties in 2020, though those are the only such ballots being challenged in the lawsuit.

Beckert said the Wisconsinites who contact her organization for support and information about indefinitely confined voting are "trying very hard to participate in our democratic process, and they have additional barriers many of us don’t have to deal with."

"If people inappropriately use the indefinitely confined provision, then they’re breaking the law, that’s a problem for that individual," she said. "We shouldn’t take it away for the vast majority of law-abiding citizens who need it and are using it appropriately."