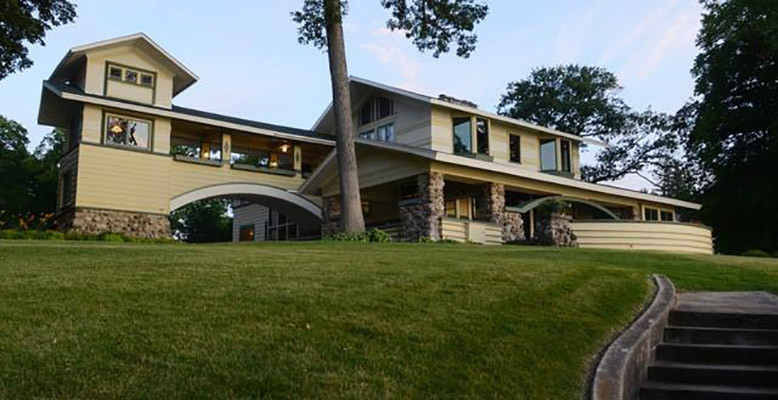 Architect Frank Lloyd Wright’s influence is visible in well-known Wisconsin sites like Taliesin, his home and studio in Spring Green; the Johnson Wax Administration Building in Racine; the First Unitarian Society Meeting House in Madison; and many private homes across the southern part of the state.

But less-well known are the cluster of summer residences on Delavan Lake in southern Wisconsin that he designed in the first years of the 20th century.

To this day, Chicagoans and others flock to the lakes in southeastern Wisconsin to escape the heat of the city. In the early part of the 1900s, there were five large resort hotels and numerous small cottages available to visitors.

Mark Hertzberg, author and photographer of "Frank Lloyd Wright’s Penwern: A Summer Estate," said prominent Windy City businessmen wanted private retreats where they could continue their active social lives. While many chose Geneva Lake, Delavan Lake to its west was favored by Henry H. Wallis of Oak Park, Illinois, where Wright maintained his home and studio.

In 1900, Wright designed a summer residence for Wallis to be on Delavan Lake. Those first plans were never implemented, but a later version was.

Wallis was also a developer, and was marketing small lots on the lake to those in his business and social circles. One was Fred B. Jones. Jones was successful businessman with Adams & Westlake, which made hardware for all manners of transportation, including steamships, streetcars, and the burgeoning railroad industry. He worked his way up from traveling salesman to managing director, and eventually to company vice-president when he retired at the age of 50.

Jones purchased several of the lots Wallis was selling in order to have enough land for the grand summer estate he envisioned. Hertzberg said the exact connection between Jones and Wright is not clear, but with numerous business and social contacts in common — including Wallis — it is not surprising the businessman tapped the up-and-coming architect to design the residence, which would be called Penwern.

When he designed Penwern, Wright was still developing his aesthetic.

"He's in a transitional stage of his career," Hertzberg explained. "He's begun to design with elements of what people know as the 'Prairie style' of his architecture in 1900, with the Bradley and Hickox houses in Kankakee, Illinois. The first full Prairie style house, the Ward Willits House in Highland Park, Illinois, comes in 1902. So, there are some elements of the Prairie style in Penwern."

Penwern sites on a 10-acre site, with 600 feet of lakefront and an enviable view of Delavan Lake.

The Wright design included four structures, the main house with a 5,600 square-foot floor plan, a boat house, gate lodge and stable. Like his peers, Jones wanted to be able to entertain at his summer residence in the same manner he could when he was in Chicago. And much of his social life in the city focused on the Chicago Athletic Club, which was a men’s club downtown. 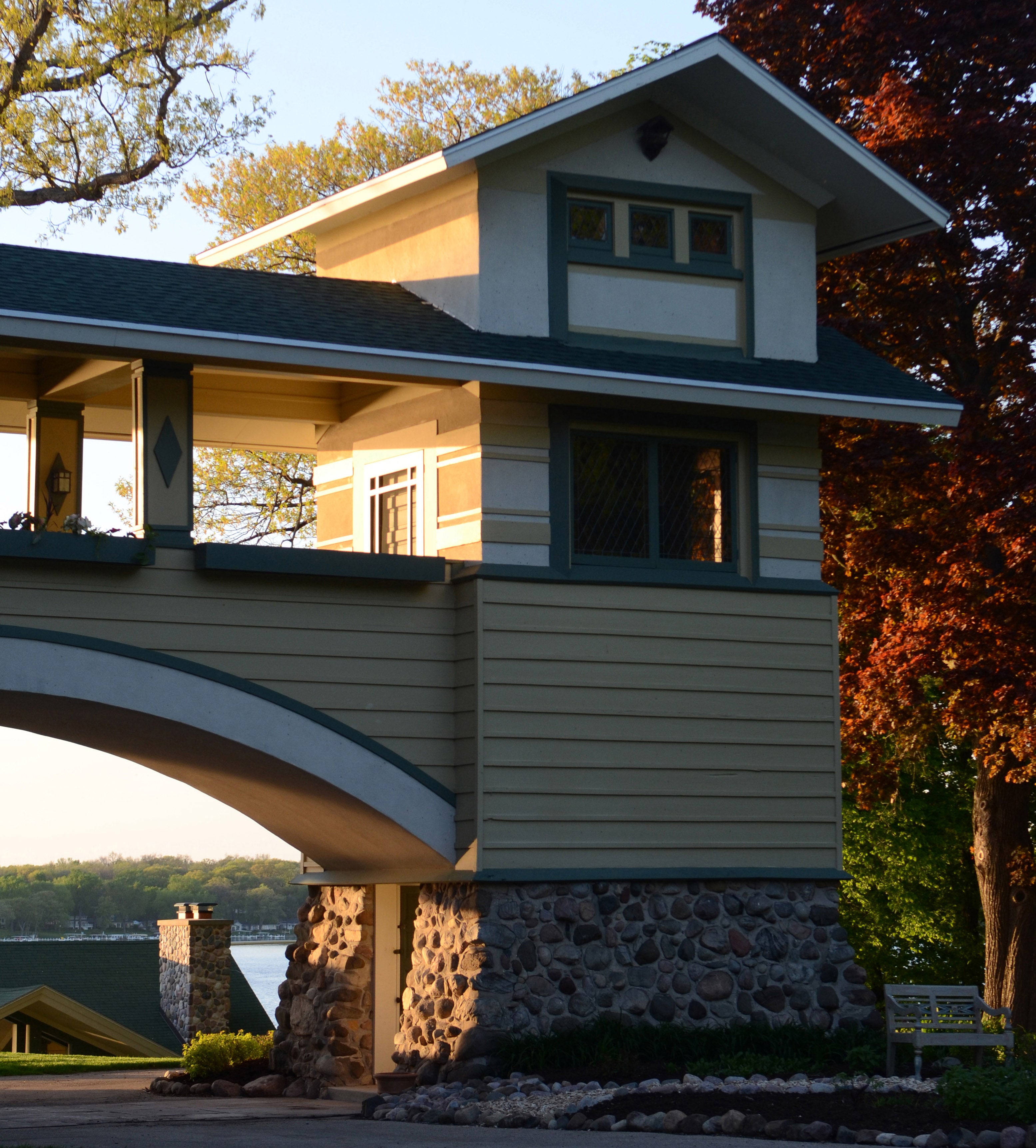 Frank Lloyd Wright called the tower at the Penwern house the "Pavilion." The space truly was the domain of men; a built in urinal drained to the ground below. Photo courtesy of Mark Hertzberg

In addition to a billiards room, one of the features of Penwern that echoed the men’s club atmosphere was the tower on the main house that Wright referred to as the pavilion. The tower was designed as a place for the men to retire to in order to play cards.

"It was certainly a 'man's cave,' in today's expression," Hertzberg said. "When the guys had to answer the call of nature, they didn't have to go back in the house: there was a porcelain urinal built into the wall of the card-playing room."

Penwern, like the neighboring summer residences designed by Wright, was sometimes referred to as a cottage, but they were really much grander than the term implies.

"It's interesting, these are called summer cottages. In my vernacular, only one of the five he designed on the lake, the Spencer House, is diminutive enough to be considered a cottage," Hertzberg said of the George Spencer Summer Cottage on Lake Delavan.

As with any nearly 120-year-old house, and particularly one on the National Register of Historic Places, restorations and renovations are not undertaken lightly. The Penwern estate has always been in private hands, and current owners Sue and John Major have owned it since 1994.

Hertzberg said the Majors were fortunate that previous owner John O’Shea found 17 original drawings for the buildings on the property. These drawings were integral to their plans to bring Penwern back to the original vision that Wright created for Jones.

In comparing those drawings with the current structures, they realized Jones himself had built two additions within the first 10 years of Penwern’s existence, additions Hertzberg called "unsightly." One of those additions cover three of the six windows in the dining room, Hertzberg said. The Majors decided to remove that structure.

Between 2002 and 2005, the Majors rebuilt the boat house according to the Wright designs. The original building had been lost to arson in 1978, and only one original sheet of drawings with four views of the building could be located. Building up from just the remaining foundation, "the boathouse looks pretty much as it did in 1902 when it was constructed," Hertzberg said, adding it was a "Herculean task, and great commitment to restoration of the estate."

Of course, many people in the area only knew the later version of the estate’s building.

"John Major told me that when he went grocery shopping, people would excoriate him for destroying a Frank Lloyd Wright house," Hertzberg said. "They didn't realize that these were not part of Wright's design." 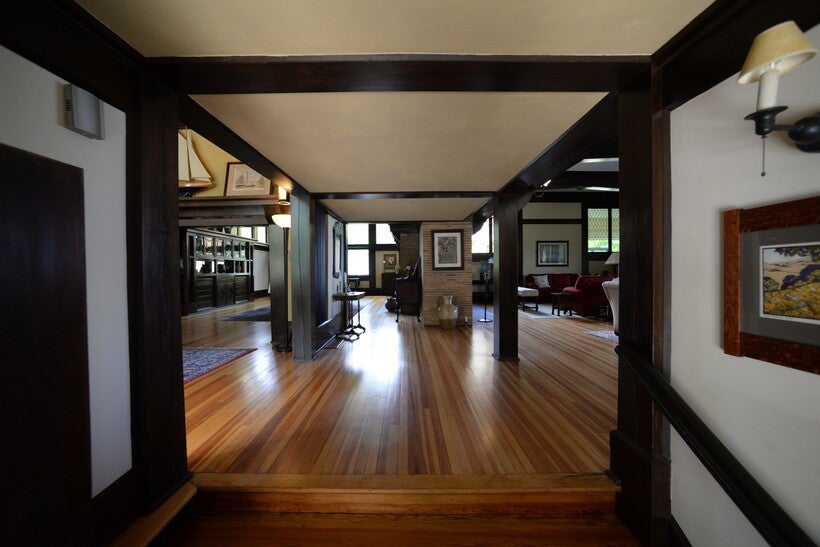 Frank Lloyd Wright’s "path of discovery" in the main Penwern house includes a feeling of compression caused by the low ceiling between the billiard room and living room. Photo courtesy of Mark Hertzberg

Penwern served as a preview of sorts for Wright’s future designs.

One element is the open floor plan for the living areas, as well as the use of a "path of discovery," or "compression and release" that gives the viewer a sense of expansion into the residence. Hertzberg describes the effect as "you come in under a low ceiling, but you can see into these other rooms — you're invited in."

Penwern also features "ribbon bands" of windows throughout the home and casement windows Wright preferred to double-hung windows, which he referred to as "guillotines."

"These are some of the elements that you will see in full maturity of his Prairie style a year or so later," Hertzberg said.