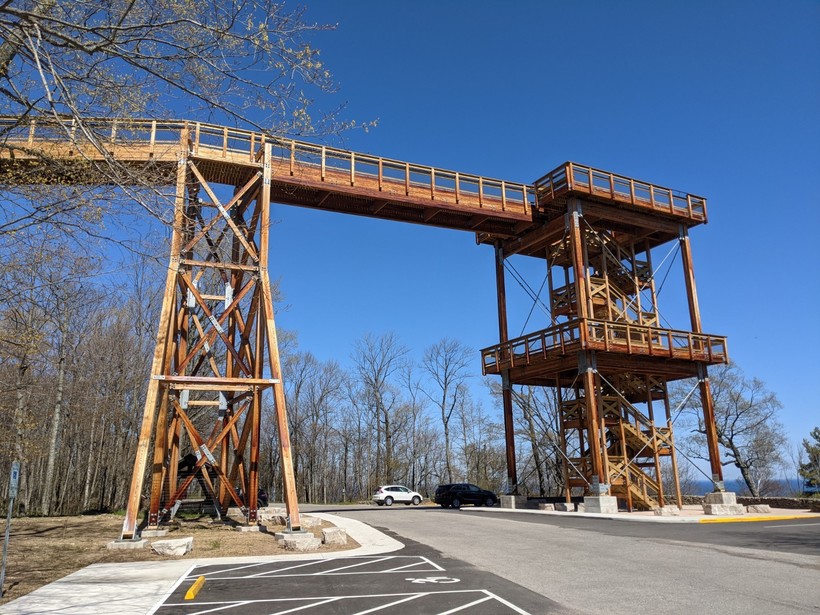 Eagle Tower at Peninsula State Park in Door County is set to open in the summer of 2021. Photo courtesy of the Wisconsin Department of Natural Resources

Visitors this summer can expect to see several upgrades at Peninsula State Park, one of Wisconsin’s most popular state parks.

The Wisconsin Department of Natural Resources announced infrastructure improvements at the Door County park in May. Campers are most likely to notice the updates, said park superintendent Eric Hyde.

The changes include bathroom improvements at the South Nicolet and Weborg Point campgrounds. The DNR also resurfaced more than 400 campsites, added new grills and water fountains, and upgraded electricity at some campsites.

"There’s no more potholes or random puddles in all the campsites, so they’re all looking good right off the bat," Hyde said.

In 2020, Peninsula State Park had about the same number of campers it saw the previous year, even though the COVID-19 pandemic closed campgrounds for May and most of June, Hyde said.

"People were definitely eager to get out and use the park," he said.

The DNR also upgraded its dump station, which will be a big deal for RV owners, Hyde said.

Some park amenities that were limited or closed last year are also preparing for a more normal summer, Hyde said. The golf course, Eagle Bluff Lighthouse and the Nicolet Beach Camp Store are already open. Performances will also return to Northern Sky Theater in June.

Meanwhile, the most excitement might surround the newly rebuilt Eagle Tower, which opened May 19. The 60-foot tower gives visitors a view from Eagle Bluff, more than 250 feet above the bay. It’s 100 steps to the top, and there’s also an accessible ramp.

This year, visitors can look forward to a beach at Peninsula State Park, with water levels down after light precipitation this winter. Rock Island State Park, which Hyde also oversees, may open this summer too.

Door County saw a record year for tourism in 2019. And while numbers were down a bit in 2020, demand for outdoor recreation remained high, said Jon Jarosh from Destination Door County.

Jarosh  has heard anecdotally from inns that advanced reservations are up for this summer, he said.

"I think nationally, destinations like Door County that are outdoor and nonurban are going to continue to lead the way in the rebound of the tourist industry," he said.

In addition to Eagle Tower, another attraction with a view recently opened. The Door County Maritime Museum in Sturgeon Bay began offering lighthouse tours in May. The new construction features a 10th floor exhibit and a rooftop deck.

While there will be lots to see in the area this summer, Jarosh said he hopes visitors will be patient as different towns and businesses implement their own COVID-19 safety precautions.