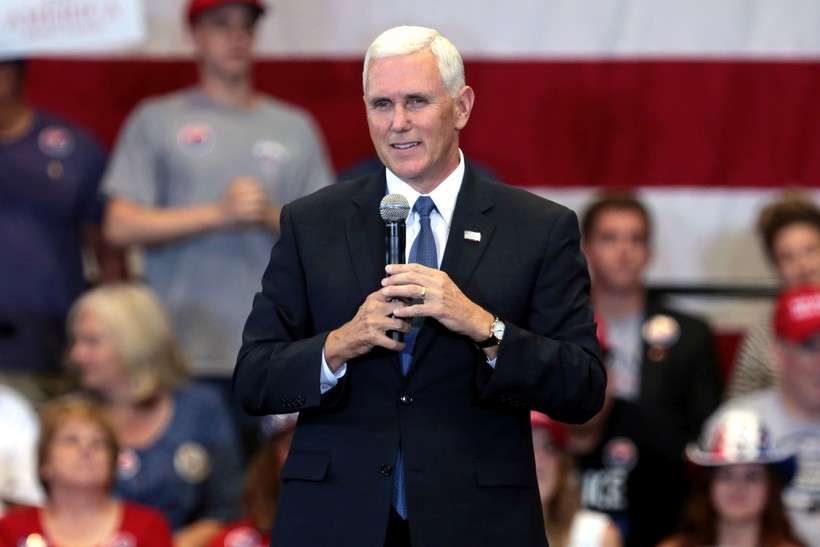 Vice President Mike Pence paid Wisconsin a visit on Wednesday to tout a pending trade agreement with Mexico and Canada.

Hundreds of people stood waiting for Pence to speak at a Uline warehouse in Pleasant Prairie on Wednesday afternoon. The shipping and packaging materials distributor was founded by Richard and Elizabeth Uihlein, Republican megadonors.

"I'm here today because we still have work to do," Pence said during his speech. "We have an incredible opportunity before us."

The USMCA was signed by Trump, Canadian Prime Minister Justin Trudeau and former Mexican President Enrique Pena Nieto back in November 2018. However, for the agreement to take effect it must be ratified by Congress and the Canadian government.

"This is why I came to Wisconsin," Pence said. "To say it is time for the Democrats in Congress to put Wisconsin jobs and Wisconsin workers first."

Pence said that he wants the USMCA approved by the end of this year.

Dave Daniels, a board member of Wisconsin Farm Bureau Federation and owner of Mighty Grand Dairy, and U.S. Rep. Glenn Grothman also spoke at the event, voicing their support for USMCA.

The agreement is expected to bring back jobs to the U.S. and increase exports to Canada and Mexico. American First Policies, a pro-Trump nonprofit group that hosted the event reports that since Trump took office, unemployment in Wisconsin has decreased from 3.6 percent to 3.1 percent and Wisconsin goods exports support around 111,000 jobs. The group says the agreement would maintain tariff-free access to the Mexican and Canadian markets for U.S. producers and it will also take away trade restrictions in place from NAFTA.

"Wisconsin's top two export markets are actually Canada and Mexico," Pence said. "So do the math everybody, the USMCA is a win for Wisconsin and a win for America."

But the president's policy isn't without opponents in the state. Cassidy Geoghegan, the Wisconsin outreach director with Priorities USA, said that while Wisconsin's stakeholders and policy makers will decide if the USMCA would benefit the state, the damage from Trump's trade war is already done.

"You can just ask farmers who have had to sell their cows, or factory workers who are now out of their jobs," Geoghegan said. "Trump's trade war has wreaked havoc on to the lives and communities in Wisconsin and people are taking notice."

According to Priorities USA Wisconsin, the state led the nation in farm bankruptcies and Wisconsin had the second-highest number of manufacturing job losses of any state in the past year.

"What you didn't hear from Pence today is that Wisconsinites are struggling because of Trump's trade war," Geoghegan said.

Still Pence predicted the trade pact would eventually be adopted.

Trump was the first Republican presidential candidate since 1984 to win Wisconsin and the state is important to his re-election campaign.

Editor's note: This story was corrected to fix a few typos. We regret these errors.