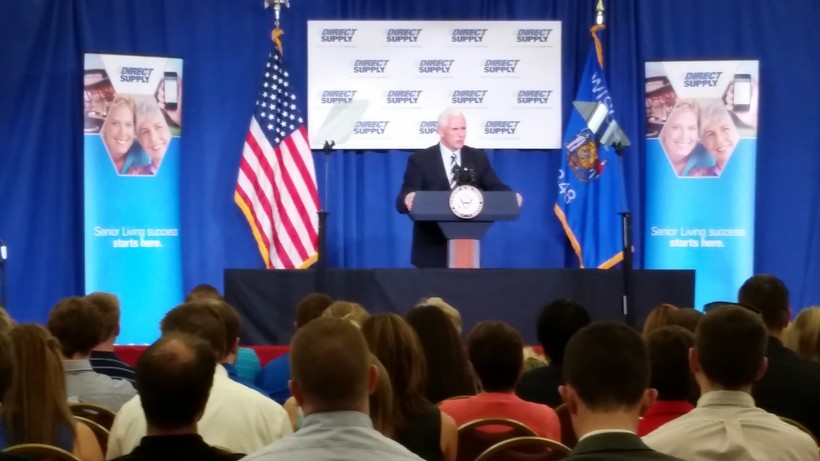 Vice President Mike Pence promised "help is on the way" for Wisconsin residents that he says are  struggling under the Affordable Care Act.

Pence spoke in Milwaukee on Saturday afternoon to about 200 people inside the headquarters of Direct Supply, a firm that services the senior living industry. Pence also held a listening session with small-business owners upset with the current health care law. Pence promised the business leaders the Trump administration will replace the Affordable Care Act with a system that gives states greater flexibility over coverage for its residents.

Pence's appearance was the Trump administration's latest effort to build support in the U.S. Senate for a health care bill passed earlier this year by the U.S. House of Representatives. The Republican vice president blamed Democrats in Congress for the delay in final action.

"I mean, they're the ones who gave us Obamacare and now, they won't lift a finger to help us rescue the American people from this mess they created," Pence complained.

Gov. Scott Walker joined Pence in a discussion with a group of business leaders before the vice president spoke.

Pence said during his speech that "help is on the way" and that "the Obamacare nightmare is about to end."

But part of the Trump administration's problem is convincing moderate Republican senators to vote for a health care overhaul. U.S. Sen. Ron Johnson, R-Wisconsin, is talking about a two-part approach that stabilizes the health care markets first, then replaces the law.

U.S. Rep. Glen Grothman, R-Glenbeulah, told news reporters before Pence's speech that he expects the GOP-controlled Senate to pass a measure and send it back for a final House vote. But the lawmaker says the Senate action won't be easy.

"If they can get it done with 50 votes, it's going to be held together, you know with Scotch tape and Band-Aids," he said.

Grothman added that one of the goals of the Senate will be to make sure more people are insured than under the original House plan.

In a conference call during the vice president's visit, Martha Laning, the chairwoman of the Democratic Party of Wisconsin, described the current House bill as  "devastating."

"It hurts the average Joe, and rewards the wealthy, who always seem to come out ahead," she said.

Laning said many thousands of Wisconsin residents would be kicked off of health care if the House bill makes it to President Donald Trump's desk.

Milwaukee Mayor Tom Barrett said on the call that he was surprised the vice president wanted to come to Wisconsin to tout legislation that would deny health care for millions of Americans.