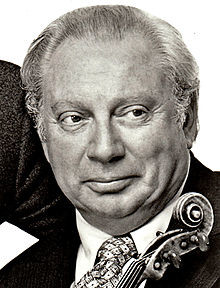 One day in 1962 world renowned violinist Isaac Stern was at the Paris workshop of celebrated lute maker Etienne Vatelot, a good friend who had written him a letter about a Chinese family of his acquaintance. Vatelot said to Stern, “They have this young boy, about six, seven years old. You should hear him. He’s unbelievable.”

Arrangements were made for Stern to hear the Paris-born boy perform. His name was Yo-Yo Ma and his cello looked bigger than he was. Stern recalled that hearing the boy play left him “astonished, truly astonished.”

When Ma and his family emigrated to the United States, Stern asked the great American cellist Leonard Rose to listen to Ma play, and Rose was fast to take him on as a student. During his studies with Rose, Ma learned important lessons about performing, bow-arm technique and practice habits in particular. Stern listened to him again and got high-powered artist manager Sol Hurok to sign him up.

In 1977, with violinist Shlomo Mintz and pianist Yefim Bronfman, Ma played the Beethoven Triple Concerto with the New York Youth Orchestra in Carnegie Hall. Years later Stern still remembered the cellist’s “turn of phrase and mastery of his instrument that were unsurpassed then or now, and an instantaneous and infectious communicativeness with his audience.”  He recalled that musicians in the audience would “turn around and smile with delight at one another as they heard the phrases flow forth with beauty and ease from his cello.”

After the performance, Stern thought back forty years to a favor the great conductor Pierre Monteux had done for him. He wrote letters to five major conductors asking them to consider inviting Yo-Yo Ma to play as a soloist. All five did invite him, and after the first rehearsal, all five signed Yo-Yo Ma for a return engagement.

Isaac Stern tells the story in his 1999 autobiography My First 79 Years.