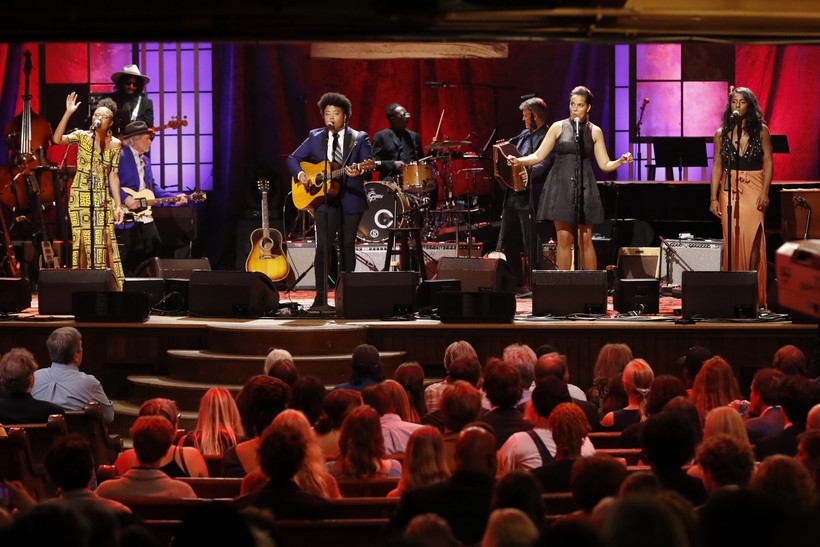 The Past Is Present On 'Songs Of Our Native Daughters'

Part of the inspiration for the 2019 album "Songs of Our Native Daughters" came from a tour of the Smithsonian National Museum of African American History and Culture in Washington, DC that Rhiannon Giddens took with her daughter.

She came across a "deadly serious" satirical quote, as she put it, by the abolitionist William Cowper that read: "I admit I am sickened at the purchase of slaves … but I must be mum, for how could we do without sugar or rum?"

In the album's extensive liner notes, she writes, "I was massively struck by the sentiment, and I thought of the modern-day slavery that produces all the things we can’t do without — iPhones, TVs, and so much else. I took a picture with my iPhone, and I remember immediately texting the image to my co-producer Dirk Powell, saying this needs to be a song."

That connection between the past and the present, between the instrument that journeyed so long ago with enslaved Africans that we now know as the banjo and modern sounds and arrangements, comes across powerfully and beautifully on this album, a "Simply Folk" favorite of 2019.

A collaboration of four African American women musicians — Giddens, Amythyst Kiah, Leyla McCalla, and Allison Russell, along with producer Powell — the album starts off with the song, "Black Myself," written by Kiah and performed by the whole group. The high-energy combination of the traditional banjo with contemporary sounds applies a modern sensibility to an ancient problem, as Kiah writes, "the refrain and title of this song are intended to be an anthem for those who have been alienated and othered because of the color of their skin."

I don’t creep around, I stand proud and free

I can go anywhere that I want to go

I’m surrounded by many loving arms

I’ll stand my ground and smile your face

The extensive liner notes to the album are wonderful reading and help reveal the album’s spirit, as Giddens writes with her opening words, "'Songs of Our Native Daughters' shines new light on African American stories of struggle, resistance, and hope, pulling from and inspired by 17th-, 18th-, and 19th-century sources. Interpreting, changing, or creating new works from old ones, this album confronts the ways we are culturally conditioned to avoid talking about America’s history of slavery, racism, and misogyny, knowing that what’s past is prologue — but only if we let it be."

The album lays out that "past is prologue" sentiment in the piece, "Barbados." Giddens recites abolitionist Cowper’s poem (and part of the inspiration for this album) titled, "Pity for Poor Africans," written in 1788. Amid the spoken word piece, the group inserts music based on the first Western transcription of a melody from an enslaved African person. Finally, Powell adds his own verses to bring the poem into modern times, lamenting the use of children and prisoners to produce many of the products we rely on today, but satirically expressing the belief that we really can’t prevent that:

Besides, if we do, the prices will soar

And who could afford to pay one dollar more?

Sitting here typing, it seems well worth the price

And you there, listening on your favorite device

This bargain we’re in — well it’s not quite illicit

So relax, my friend — we’re not all complicit

Allison Russell writes and performs a particularly touching song, "Quasheba, Quasheba." Russell met her biological father when she was 30, and discovered she is a descendent of an African woman named Quasheba on her paternal family’s side. Quasheba lived through the horrific journey from Africa, an enslaved life in Grenada working on a sugar plantation, repeated rapes, being sold many times, and having her children taken from her. Yet, Russell writes, she "founded generations." Russell goes on to say, "I wept to learn her name. I am honored to be her many-times-removed daughter and am eternally grateful for the gift of her strength and resilience."

How far your spirit’s flown

Blood of your blood

Bone of your bone

By the grace of your strength

The cover of the album features the four musicians with banjos, and the instrument beats as the heart of the disc’s mix of sounds. The banjo and its ancestors made the journey from Africa with the enslaved people and was further developed by black players before being adopted by white musicians in the 19th century as the first true American instrument and a core sound for American music.

In the liner notes, Giddens continues the album’s spirit of connecting the past to the present, writing, "It’s impossible to say exactly which notes, rhythms, and lines are from the legions of black banjo players that inspired that first generation of white players, but in these early tunes I hear my brethren and I like to think that they hear me too, as we transform these pieces through a contemporary African American lens."

Each of the songs on the album is incredibly powerful, with fantastic performances by all the musicians, ranging from the harrowing "Mama’s Cryin’ Long," to the inspiring "Polly Ann’s Hammer," to the musically light-hearted by deadly serious, "Better Git Yer Learnin’."

After an artistically stunning journey through some very difficult but necessary terrain, the album ends on some hopeful notes, the penultimate song, "Music and Joy," and the finale, "You’re Not Alone."

With her four-year-old daughter Ida in mind, Russell said she wrote "You’re Not Alone" because, "The strength and resilience of all our ancestors sustain us. In this time when schools need to practice active shooter drills and places of worship become targets and houses of death, we are not alone. Our ancestors survived worse. For their sake and our children’s sake, we can do better. We can be better. We are one family, blood and bones, one race — human — and so many beautiful colors. We have love. We can take better care of each other. Music helps. Music heals."

How bright you are