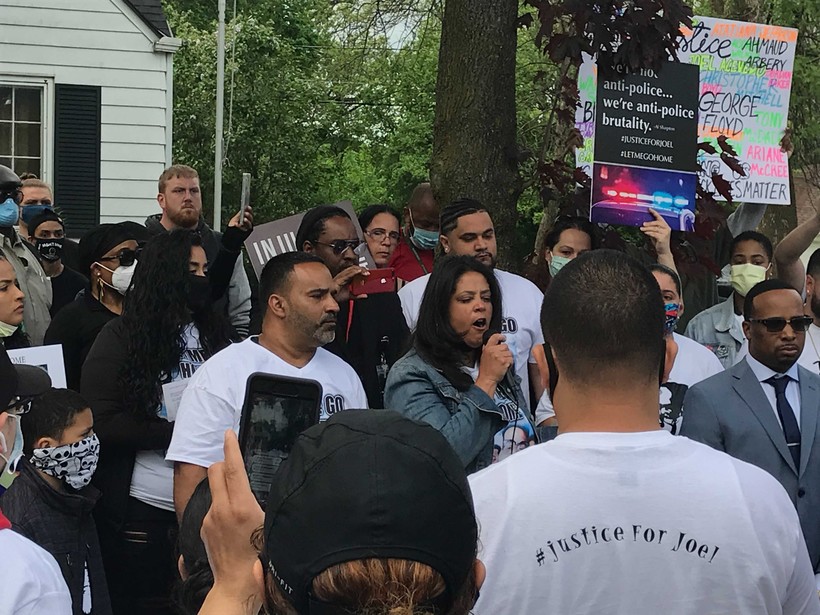 Jose (left, in white) and Maribel Acevedo (center, with microphone), accompanied by attorney B'Ivory Lamarr (right, gray suit) speak to a crowd protesting the death of their son, Joel Acevedo, outside the home of Michael Mattioli, the off-duty Milwaukee Police officer charged with first degree reckless homicide in his death, on May 29th, 2020. Madeline Fox/WPR

The parents of Joel Acevedo, a 25-year-old Milwaukee resident who died in April 2020 from injuries at the hands of off-duty police officer Michael Mattioli, have asked the Milwaukee Police Department to release footage from police body cameras and squad car cameras that show what happened after police were called to Mattioli's home on April 19, 2020.

The approximately 40 hours of footage would include police entering Mattioli's home after he called them, Acevedo on the ground, first responders performing CPR and getting Acevedo into the ambulance and then to a hospital, conversations among the responding police officers after Acevedo was transported, witness statements, interviews of neighbors and statements Mattioli made.

At a Monday afternoon hearing in Milwaukee County Circuit Court, B'Ivory Lamarr, the attorney for Acevedo's family, said the public should be able to watch the videos related to Acevedo's death and come to their own conclusions.

"I think that the only way for the public to understand where the family is coming from is for them to see it for themselves," he later told WPR in an interview.

Mattioli's attorney, Craig Powell, said he believes the footage is exempt from release under open records laws, and, even if it were not, the release of those videos would interfere with Mattioli's right to a fair trial. He stressed they're not asking that the footage never be released — they just want to wait until after Mattioli's criminal trial is over.

"We are not seeking these be barred forever — this is a short-term injunction seeking to preserve Mr. Mattioli's right to a fair trial, seeking not to interfere in the prosecution of the case," Powell said.

Mattioli is facing a first-degree reckless homicide charge. His trial date has not yet been set, though his case has a status hearing scheduled for April 28.

Lamarr said Mattioli's attorneys haven't made a strong enough case for how the release of the footage would interfere with Mattioli's trial, particularly considering the district attorney's office has already gone through and redacted parts of the videos.

"The law does not recognize that releasing open records would result in an impartial jury — in fact, it says the opposite," Lamarr said.

Lamarr said he and the family have seen about 10-12 minutes of the body camera footage, specifically the parts that depict the arrival of on-duty officers at Mattioli's house, Mattioli restraining Acevedo while a second person held Acevedo's legs down and Mattioli identifying himself as an officer.

"It's not just about Mattioli — there's elected officials who make decisions as to who gets charged, who doesn't get charged, there's responding officers — how did they investigate this case? Did they act quickly?" Lamarr said about the need to release the videos before trial. "When you decide to be a public servant, you're accountable to the public and there should not be a delay."

Lamarr and fellow attorney Ben Crump released the audio of Mattioli's April 19 call to 911 in December. In it, Acevedo can be heard asking the men to let him go home. Mattioli can be heard calling 911 and identifying himself as a police officer who was being attacked. Lamarr said the addition of the camera footage could lead to "accountability" for others involved, from the person holding Mattioli's legs to the responding officers to elected officials.

Powell said he wants to avoid similar publicity from the body camera and squad camera footage, which he said gave "a very one-sided view" of the April 19 incident.

"We know from (the family's and their attorneys') prior conduct, when they were given access to the 911 call, they held a press conference, played it, and gave a sort of running commentary about what they believe the 911 call to show," said Powell. "I think it would be fair to expect that that would be the same treatment they give the body camera footage."

The judge in the case, William Pocan, set May 5 as the date for his oral decision about whether the footage should be released, though he said he intended to issue a written ruling before then.