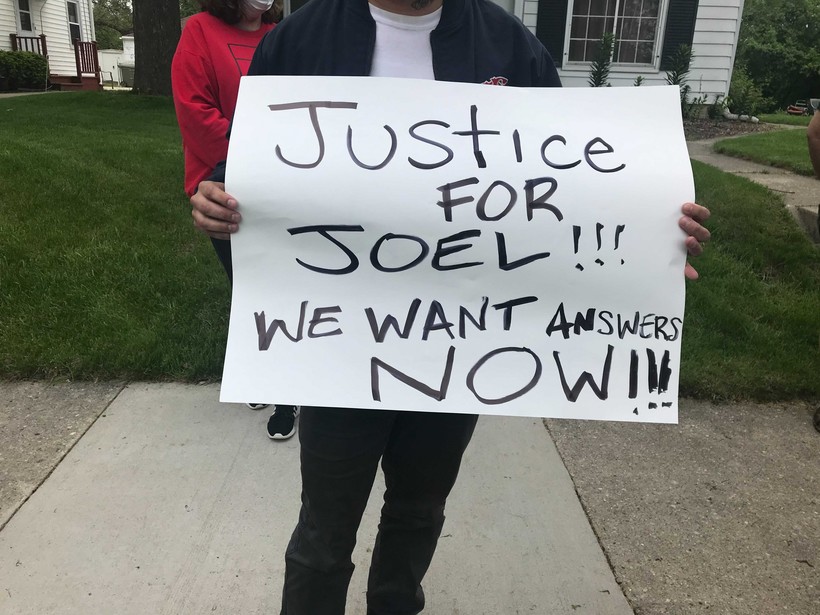 People gathered outside of Milwaukee police officer Michael Mattioli's home on May 29, 2020, after the killing of Joel Acevedo. Madeline Fox/WPR

Joel Acevedo Was Held For More Than 11 Minutes By Former Officer Mattioli
By Corrinne Hess
Share:

Newly released audio from a 911 call sheds light on the death of a Milwaukee man at the hands of a police officer in April.

Joel Acevedo was in a choke hold for 11 minutes and 20 seconds on April 19. Acevedo, 25, was at a party at the southside Milwaukee home of officer Michael Mattioli when he reportedly got into a fight that led to the strangling.

Another man held Acevedo’s legs, while Mattioli leaned on his neck. There was a third man involved, according to the criminal complaint and the 911 call.

In the call, Acevedo can be heard asking the men to let him go home. Mattioli can be heard calling 911 and identifying himself as a police officer who was being attacked.

The 911 audio tape was released Thursday afternoon by attorney Ben Crump and co-counsel B’Ivory LaMarr, who are representing the Acevedo family.

Mattioli has been charged with first degree reckless homicide. He resigned from the Milwaukee Police Department in September after spending four months on paid leave.

"He identifies himself as an officer, which is very troubling," LaMarr said. "You’ve heard reports, Joel is an aggressor. You hear him (Acevedo) saying, 'Let me go home.' He was being held captive as a prisoner."

Joel Acevedo’s parents Jose and Maribel Acevedo said the Milwaukee Police Department has never reached out to them — even to let them know their son was in the hospital after the party.

And now, eight months after their son’s death, the Acevedos say they don’t trust anyone in the city to be transparent with them. The Acevedos would like to see the two other men at the party charged with a crime.

Kent Lovern, chief deputy district attorney for Milwaukee County, said at this time, there are no other charges being pursued in the Acevedo case.

"Mattioli had no remorse after the fact that he held my son for over 11 minutes on a chokehold, he has no remorse even today," Maribel Acevedo, Joel's mother, said. "And the DA’s office, the Fire and Police Commission office, the Milwaukee Police Department, the union, is all biased. Who is really representing us here? We will stand our ground until justice is served."

The Acevedo family and their attorneys are arguing to release police body camera footage from the night Joel Acevedo was strangled. Mattioli has sued to keep the footage from being released, arguing it deprives him of a fair trial.

Once the body camera footage is released, LaMarr said people will see Mattioli straddling Acevedo and using his body weight to choke him, and another man holding Acevedo’s legs down.

"Seeing is believing," said LaMarr, who has seen the footage. "What you heard today is going to set the table for what you will expect to see from the body camera footage."

Jose Acevedo, Joel's father, has also seen the footage. He cried while describing it.

Mattioli’s motion hearing has been set for March 8, 2021, in Milwaukee County Circuit Court.