Wisconsin election officials have had six months since April’s chaotic presidential primary election to figure out what safe and efficient voting looks like during a global pandemic. They’ve started new programs, reached out to educate voters, and stocked up on supplies — but they’re still facing uncertain circumstances and Wisconsin election laws some say make it too hard to vote.

Wisconsin’s April election happened during a challenging time for the state. The coronavirus pandemic was in its early days. On March 25, Gov. Tony Evers issued his "safer at home" order, less than two weeks before election day.

People were trying to figure out how to vote by mail, many for the first time in their lives, and their ballots weren’t arriving quickly enough. Lawsuits were flying, which led to even more frustration and confusion for voters.

In some cities, including Milwaukee and Green Bay, a shortage of poll workers due to coronavirus fears led to a drastically reduced number of voting locations, leaving some voters waiting in line for hours.

On a crisp fall afternoon in October, Tom Poppe was in Madison’s Rennebohm Park, a tree-filled green space on the city’s near-west side with a basketball court, a playground, a community garden and — on that particular day — an outpost for the city clerk’s office.

Poppe is an election worker for the Madison city clerk. A clipboard in hand and a bright yellow safety vest pulled over his jacket, he helped Madison voters turn in completed absentee ballots.

"It’s just like an extension of the city clerk’s office, if you think of it that way," Poppe said. 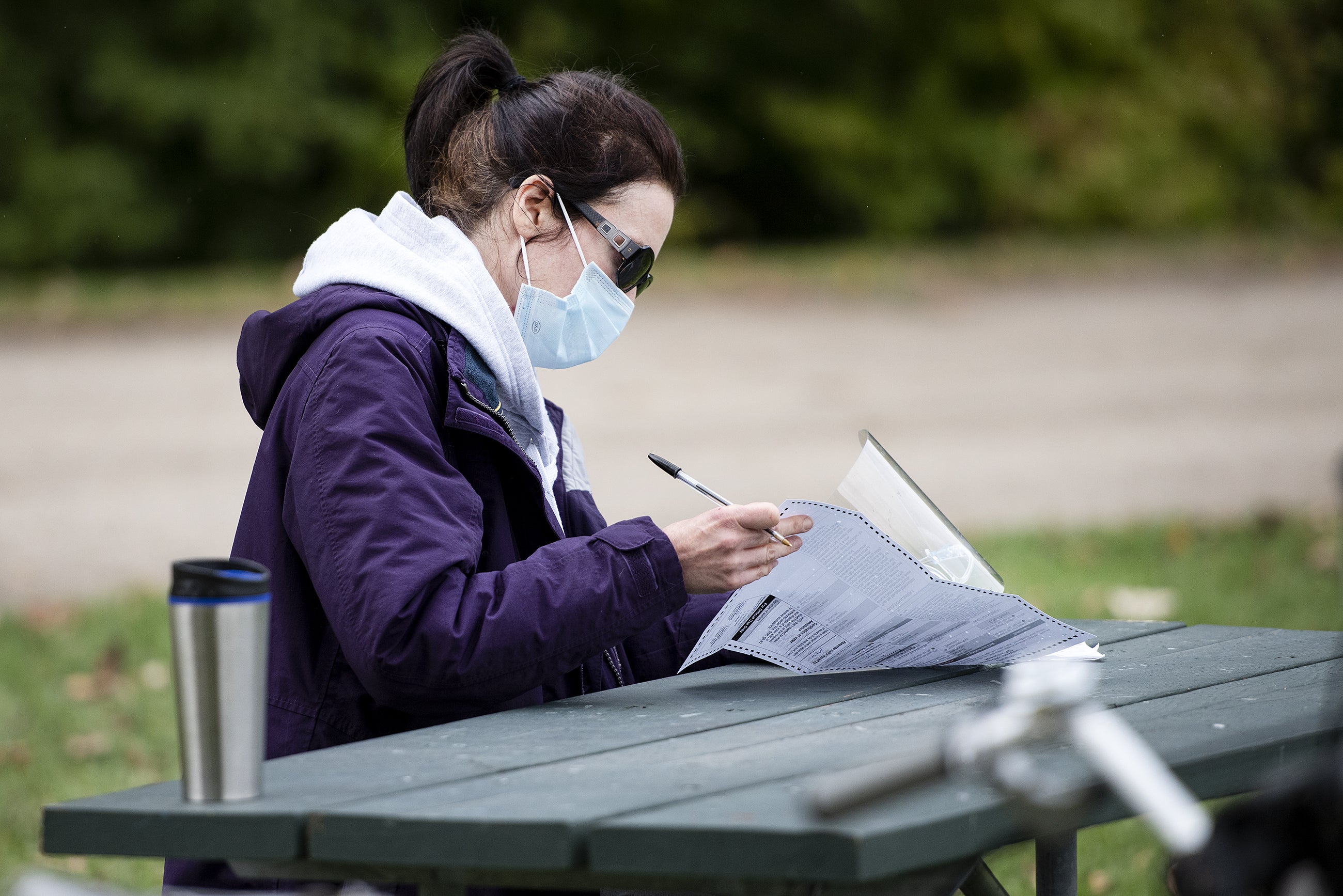 Natalie, a voter in Madison, completes her absentee ballot at a park table before dropping it off in person Saturday, Oct. 3, 2020, at Garner Park. Angela Major/WPR

The event, called "Democracy in the Park," provided more than 10,000 voters a place to drop off completed ballots or to get witness signatures on ballots they had already received through the mail. No new ballots were handed out.

Poppe and his fellow poll worker were attentive guards to the tamper-safe ballot bag, tucked under a picnic table.

Renee Han, who lives near the park, was thrilled to learn she was mere steps away from turning in her ballot and completing her democratic duty more than three weeks before Election Day.

"I just wanted to give (my ballot) to an actual person," she said.

Jennifer Bellehumeur, who brought her ballot to the park while walking her dog, agreed.

"As much as I like to support (the Postal Service), I guess I’d just rather drop it off here, with a known poll worker, and it’s in someone’s hands," she said. "I feel like the mail is a little bit risky right now."

Under state law, voters can request their ballots as late as the Thursday before Election Day — with just five days to receive, complete, and return it. But the U.S. Postal Service recommends people mail completed ballots "at least one week" before they're due. In Wisconsin, that’s 8 p.m. Election Day.

The space between what state law allows and what the Postal Service says is possible has spurred Ben Wikler, chair of the Democratic Party of Wisconsin, to adopt a new mantra this October. 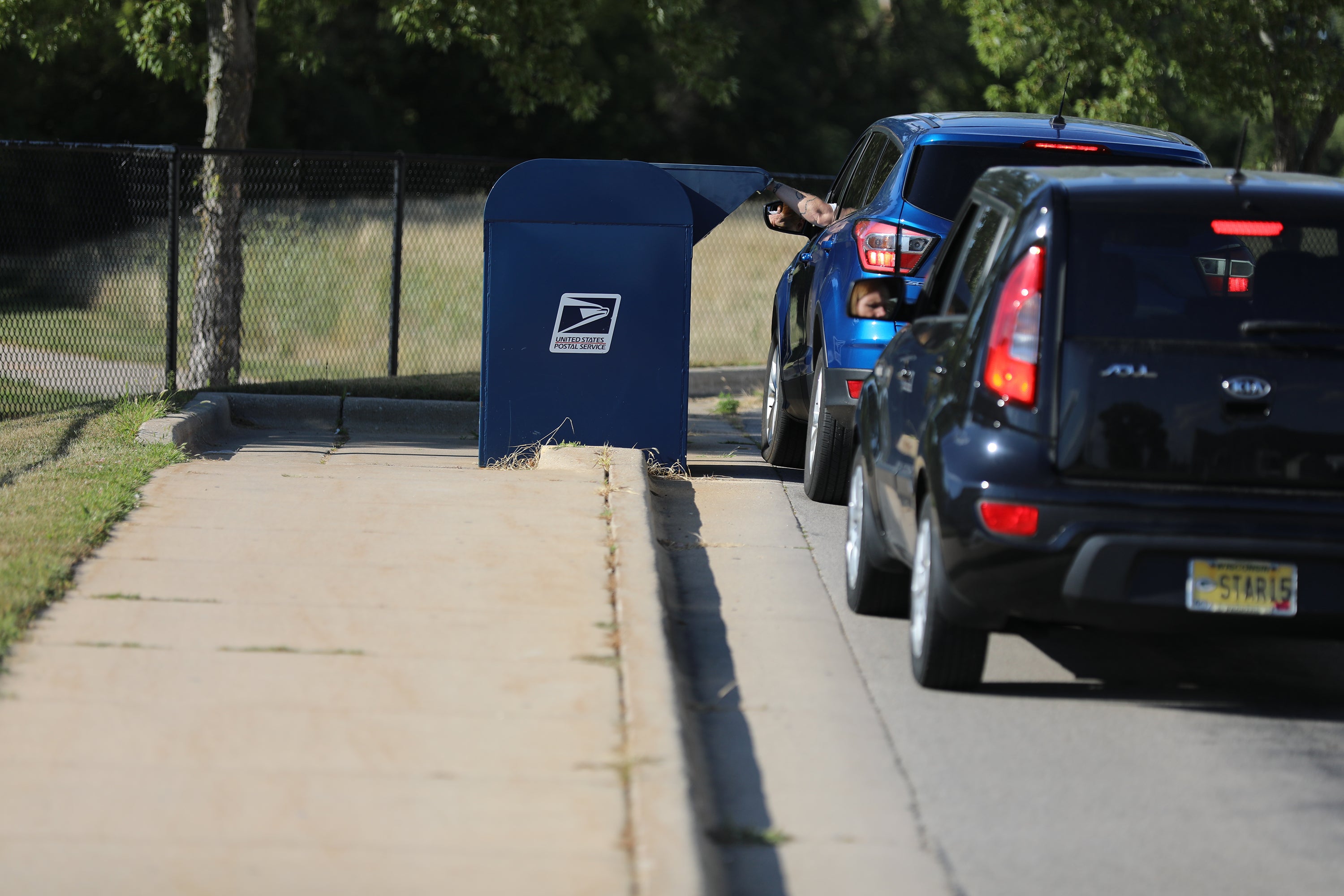 In April, 79,000 ballots arrived at clerks' offices after election day, according to the Wisconsin Elections Commission. But because a federal court granted a six-day extension for clerks to receive ballots, they were still counted.

Democrats and several advocacy groups have filed a lawsuit to get a similar extension for November’s election. So far, they haven’t been successful.

He said the party is offering a free hotline for voters to call with questions about the process or help troubleshooting problems.

In general, polling suggests Democrats are more likely than Republicans to vote by mail. According to a Marquette University Law School poll released earlier this month, fewer than one-fifth of Republicans are planning to vote by mail, compared to almost half of Democrats.

Rohn Bishop, the chair of the Republican Party of Fond du Lac County, took some heat from Republicans earlier this year for pushing back against President Donald Trump’s criticism of mail-in voting.

Over the summer, Bishop said his "nightmare scenario" would be a surge in COVID-19 cases this fall that would scare some GOP voters away from voting in person, after they’d already bypassed voting by mail.

"It’s creepy how that premonition is kind of turning out to be true," he said.

It’s true in the sense that cases of COVID-19 are surging in Wisconsin. Of course, It’s impossible to predict who may forego voting in person on Election Day, and why.

According to the Wisconsin Elections Commission, more than 1.4 million people have requested mail-in ballots for November. With about a week and a half until Election Day, 915,000 have been returned.

Many communities are now offering ballot drop boxes for people wary of Postal Service delays ahead of Election Day, and in-person early voting began Tuesday across Wisconsin, so many clerks are also offering that option to vote or register to vote.

They’re equipped with masks, hand sanitizer, and a boatload of disposable pens. They all learned hard lessons in April — and they’re determined not to repeat history.