With the November general election 40 days away, Wisconsin college students could play an outsized role among peers in choosing the next president, according to national research.

But young people have historically had the lowest turnout among any age group. And now with a growing list of temporary shutdowns at University of Wisconsin System campuses and general uncertainty caused by COVID-19 outbreaks, some college students are facing a new set of challenges in the final stretch of the 2020 campaign.

In early August, the University of Wisconsin-Madison Badgers Vote Coalition held a three-day voter registration drive on campus. A series of tents dotted busy thoroughfares at the state's largest university, shading poll workers and volunteers who worked to register passing students to vote and help them submit absentee ballots ahead of the August primary.

UW-Madison student Tehya Crego, of Milwaukee, cast an absentee ballot for the August primary at one of the tents. 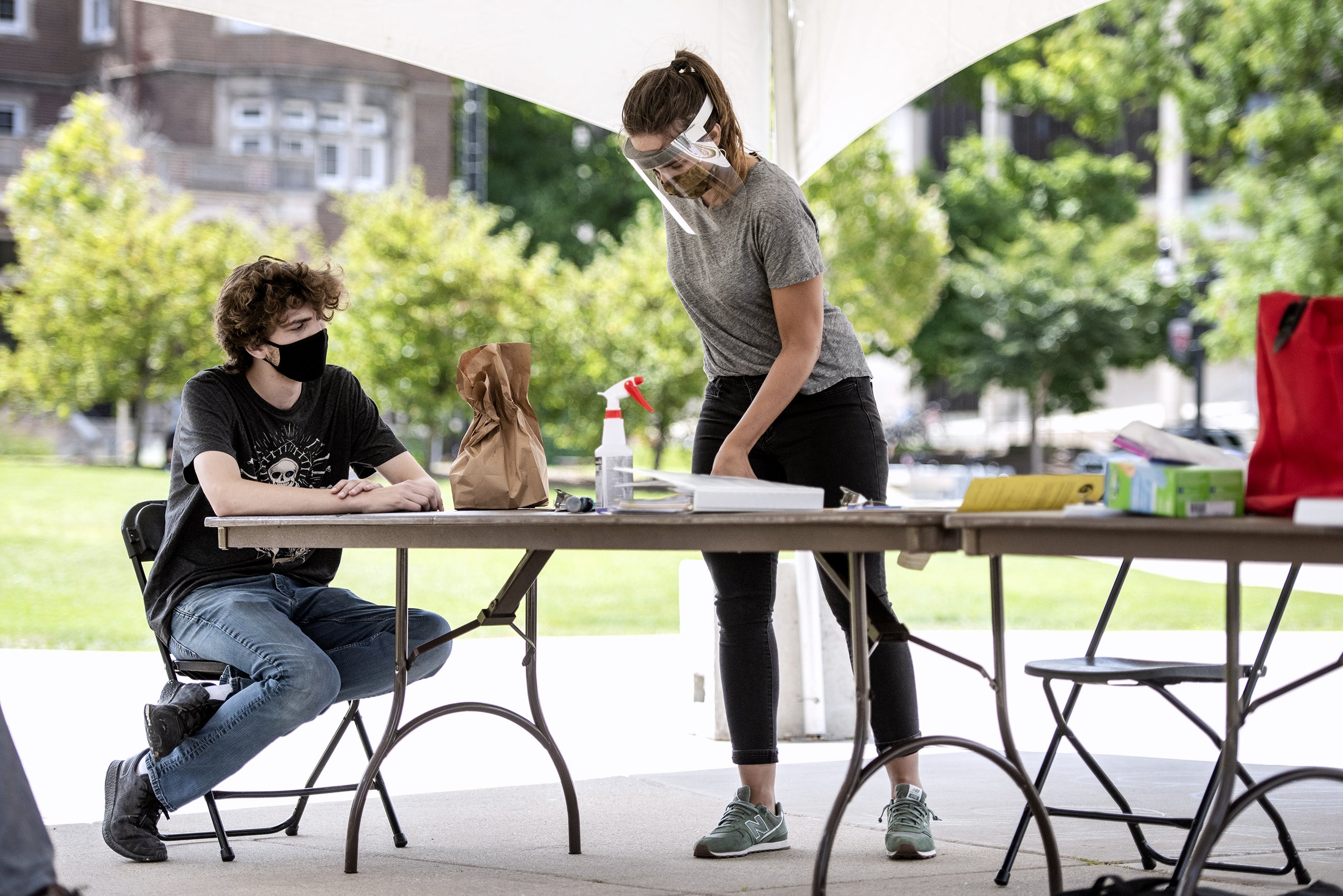 Just over a month later, UW-Madison announced it would once again move classes online, albeit for two weeks, after a spike in students and staff testing positive for the coronavirus. The university also quarantined students living in two residence halls and several off-campus fraternities and sororities.

The disruptions to campus life and the possibility that students could be sent home during the final stretch of the presidential election loom large over efforts to ensure students are ready to vote this fall.

"And so our strategy right now is to communicate as best we can, primarily through social media, with students and trying to use some humor, you know, engaging with them in a fun way to make sure that they know how they can obtain a voter ID electronically if they need to," said Cramer.

Wisconsin's voter ID legislation passed by Republican lawmakers and signed by former Gov. Scott Walker in 2011 has special requirements for college students. It bars campus IDs from being used at the polls unless they have a photo, signature and two-year expiration date. Generally, student university IDs are good for four years. In response, UW-Madison began offering free campus voter ID cards to students. Even with a special voting ID, students need to present an enrollment verification letter at the polls in order to cast a ballot. 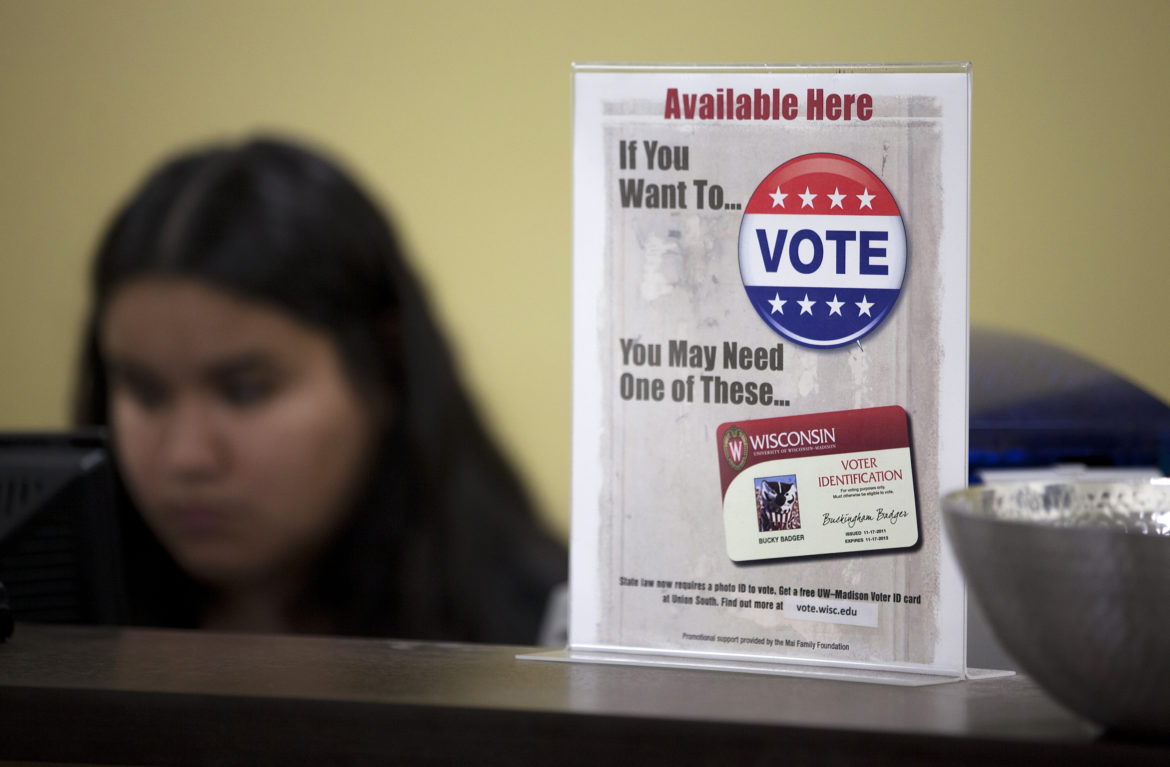 A sign at Union South at UW-Madison lets students know they may need additional identification to vote in Wisconsin beyond their regular student ID. Coburn Dukehart/Wisconsin Watch

A 2014 study by the nonpartisan U.S. Government Accountability Office found that voter ID laws in other states reduced turnout among Black people and those between the ages of 18 and 23.

The COVID-19 pandemic and the temporary shift to online classes have created additional obstacles for students working to mobilize the campus vote, said UW-Madison College Democrats chair Rianna Mukherjee. She said in-person connections are the best way to reach students.

"Even though you have Zoom meetings, I feel like people aren't as interested because it's really hard to sit in front of a computer or a phone for, like, three hours. You get tired. It's different," she said.

During the College Democrats' first Zoom meeting of the fall semester, members discussed ways to keep students' interest and get them to engage. One plan was to hold a College Democrats "Jeopardy" trivia meeting, said Mukherjee.

"And, you know, we'll obviously be silly and make it fun," she said. "But what we're excited about is trying to incorporate things about voting registration in Wisconsin for students on campus, whether that's to register (themselves) or help friends and peers register, because it can be pretty confusing."

"So there are a surprising number of difficulties in the simple act of getting registered to vote, which is the first thing that has to happen before a person can work their way through the voting process," said Barry Burden director of the UW-Madison Elections Research Center.

Wisconsin's voter registration rules dictate that a person must live at their current residence for 28 days in order to vote from that address. At most UW System campuses, dorm residents began moving in at the end of August, which means some are just becoming eligible to register this week if they want to change their voting address. Some UW students won't be able to register their campus addresses until the first week of October. 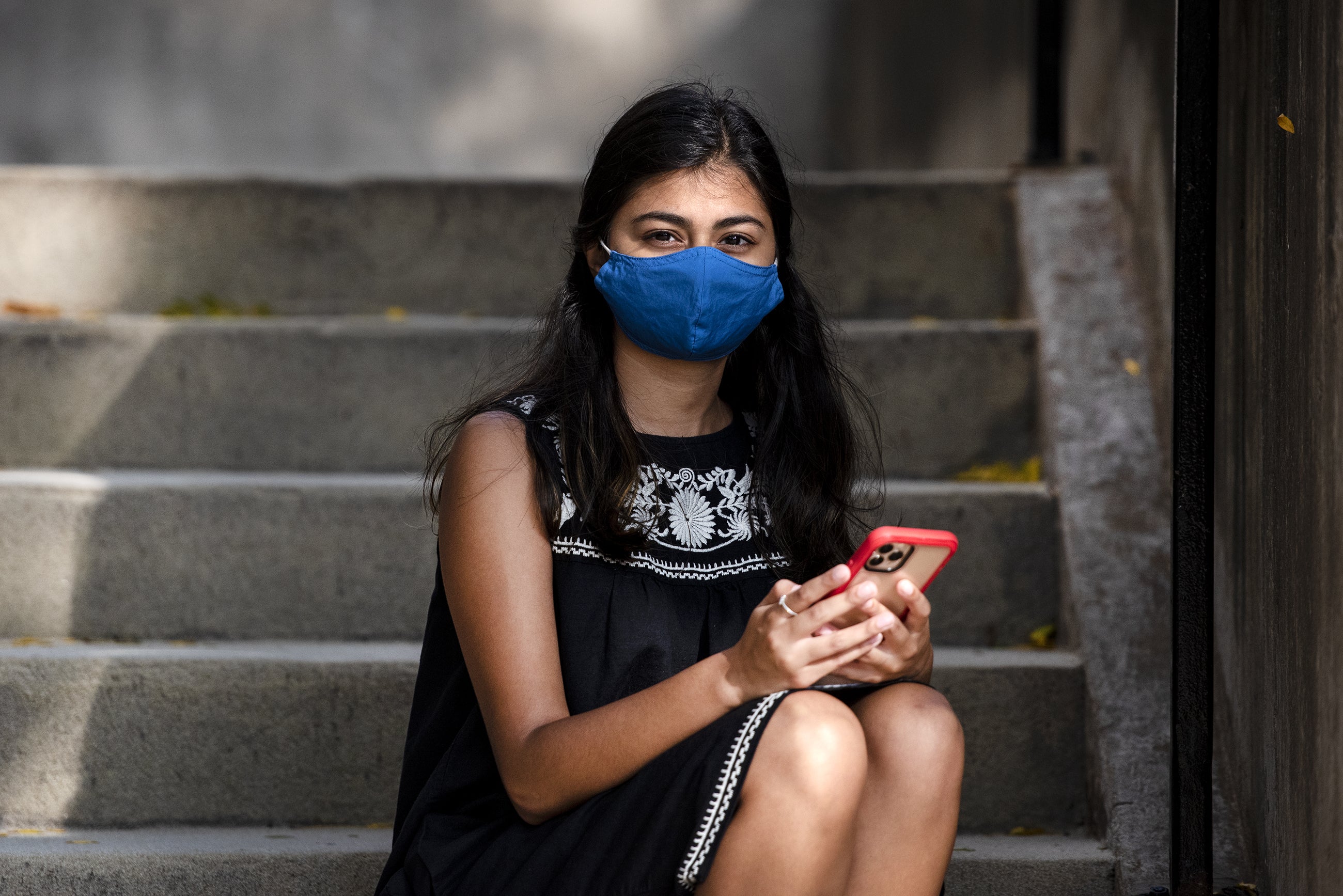 Rianna Mukherjee, chair of the UW-Madison College Democrats, has been organizing virtual events to engage student voters in light of COVID-19. Angela Major/WPR

Out-of-state students don't have this option and must fill out a registration form, include proof of residence and mail it to their local municipal clerk before Oct. 14 in order to vote in Wisconsin. A federal court ruling could extend that deadline by a week, but it has already been appealed by Republican state lawmakers. Voters can also register in-person at their municipal clerk's office until Oct. 30 or at their polling place on Nov. 3.

"So there are a surprising number of difficulties in the simple act of getting registered to vote, which is the first thing that has to happen before a person can work their way through the voting process," said Barry Burden director of the UW-Madison Elections Research Center.

Burden said those difficulties could be compounded if coronavirus outbreaks continue and universities close, sending students home for the rest of the semester before Nov.3.

"So it's quite possible that students will be leaving their campus environments and heading somewhere else, probably back to live with their parents," Burden said. "And that will be happening, unfortunately, right at the time when voter registration deadlines are hitting in mid-October, when the deadlines for requesting absentee ballots are coming due."

On Friday, Sept 18, Wisconsin Health News reported that UW System interim President Tommy Thompson said closing campuses down for the long-term was "not on the table."

Despite the challenges of having to rally his fellow college Republicans on campuses restricting in-person interactions, UW-Madison student and Federation of College Republicans chair Evan Karabas said his team is not letting it discourage them.

"I mean, it's an election year," Karabas said.

He said during typical student organization fairs, the College Republicans of UW-Madison collect hundreds of signatures from potential recruits.

"But even still, the amount of people we've been getting willing to sign into a Zoom meeting, which fewer people generally want to do than coming in person, the enthusiasm has been really awesome," said Karabas.

According to the U.S. Census Bureau, 18 to 29-year-olds had the lowest voter turnout of any age group in the 2014 and 2018 midterm elections.

But Nancy Thomas, director of the Institute for Democracy and Higher Education, said while it is true that turnout among young adults is generally low, there are signs that enthusiasm is not in short supply among college students leading into the presidential election.

A study she co-authored last year showed that 40 percent of students who were eligible to vote in the 2018 midterm election cast ballots nationwide. That's more than double the rate in the 2014 midterm.

Thomas said while the COVID-19 pandemic is adding logistical challenges for students leading up to the presidential election, registration rates for those in the college-age group are higher now than they were in 2016.

Still, Cramer, of the Badgers Vote Coalition said they're encouraging students to sign up for text alerts, warning them of new twists between now and November.

"Because we're expecting things are going to change with this election on a moment's notice. Whether it's a new court case or something about the pandemic, everything is in flux, right? As is everything in society," said Cramer. "You never know on a day-to-day basis what you need to do."