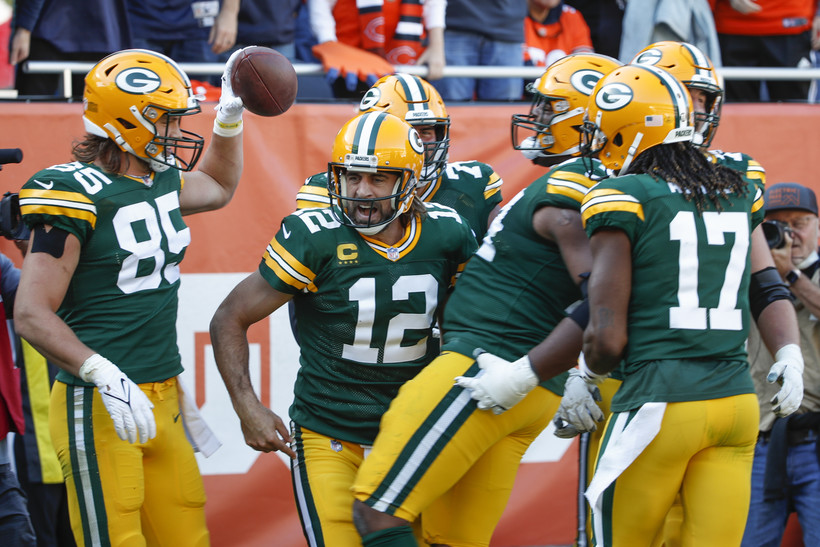 Green Bay Packers quarterback Aaron Rodgers (12) celebrates with teammates after scoring a touchdown during the second half of an NFL football game against the Chicago Bears, Sunday, Oct. 17, 2021, in Chicago. Kamil Krzaczynski/AP Photo

Packers return from bye with chance to clinch division

The Green Bay Packers were off last weekend. Still, they got one step closer to clinching the NFC North for the third straight year thanks to a big upset.

The Detroit Lions beat the Minnesota Vikings on Sunday to earn their first win of the season. If the Vikings lose to the Pittsburgh Steelers on Thursday and the Packers beat the Chicago Bears on Sunday, Green Bay will win the division again.

The Arizona Cardinals lead the Packers by one game in the conference standings, but Green Bay holds the tiebreaker. The Packers and the Tampa Bay Buccaneers are both 9-3.

"That’s the way it is every year, there’s a bunch of teams right at the top," Packers head coach Matt LaFleur said Monday. "You can only control what you can control in terms of how you prepare each and every week."

LaFleur is in his third year with the Packers. He took the team to the NFC title game in both of his first two seasons.

The Packers have managed to play their best football in big games this year. Two of their three losses came against teams that now have losing records. The third was the game that quarterback Aaron Rodgers missed with COVID-19.

The Bears will be motivated for Sunday Night Football at Lambeau Field, LaFleur said. But he doesn’t pay much attention to what other teams are doing this time of year.

"I think we’ve just got to take care of our business and whatever happens in those other games, that’s the way it rolls. But we’ve got many tough challenges in front of us, starting with Chicago," he said.

The Packers beat the Bears when they met at Soldier Field in October, but it’s not easy to face teams twice in a season, LaFleur said.

"You’re going to rely on a lot that went right and/or wrong the first time you played," he said.

There’s also the question of who will start at quarterback for Chicago. When they played earlier this season, Justin Fields was under center for the Bears. Fields suffered several broken ribs in November, and it’s unclear if he’ll be available to play Sunday. Veteran Andy Dalton has started in his place.

"Andy has played in this league for a long time, so it’s hard to really fool a guy like that. I think he’s done some really nice things," LaFleur said, also complimenting Fields for his playmaking ability.

"Hopefully we can get him out there at practice, but if not, we’ve got a lot of confidence in his ability to get out there (Sunday) and play at a high level," he said.

Corner Jaire Alexander, tackle David Bakhtiari and linebacker Za'Darius Smith could also be back on the practice field this week after missing time with injuries, LaFleur said.