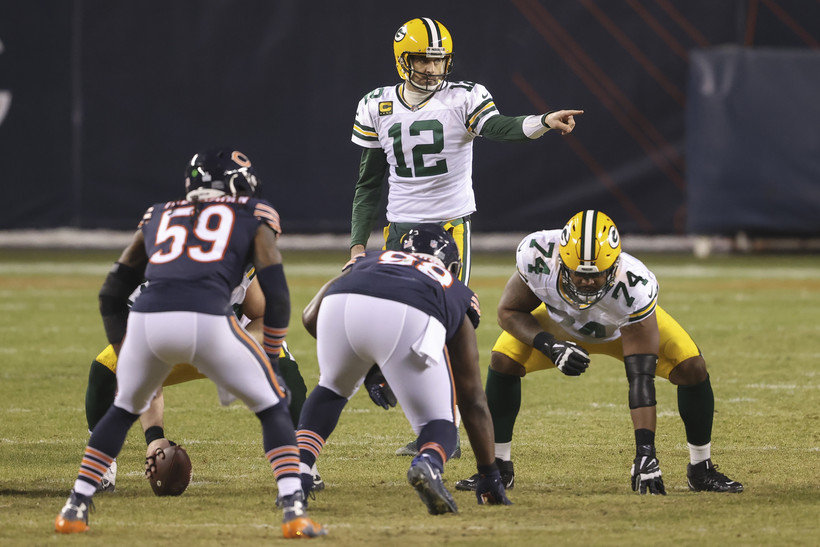 Green Bay Packers quarterback Aaron Rodgers (12) directs his team against the Chicago Bears during the second half of an NFL football game, Sunday, Jan. 3, 2021, in Chicago. Kamil Krzaczynski/AP Photo

With lead in NFC North, Packers prepare to face division rivals in Chicago

Aaron Rodgers says Green Bay has had upper hand lately, but it's still a tough rivalry
By Megan Hart
Share:

Green Bay Packers quarterback Aaron Rodgers was asked at a news conference this week to name all his counterparts who've started for the Chicago Bears during his tenure. He got a quarter of the way there.

It’s been a revolving door at the position for the Bears in recent years, and Chicago is likely to be led by a new starter when the top two teams in the NFC North face off Sunday.

Chicago's latest quarterback knows a thing or two about rivalry games. Justin Fields was the Bears' first pick in the last NFL Draft. The former Ohio State quarterback said the best thing about playing rival Michigan was beating them – something that's happened often in recent years. But he'll face a tall order when Chicago hosts Green Bay at Soldier Field.

It's the first meeting for the rivals this season. The Packers are coming off four consecutive wins following a blowout loss to the New Orleans Saints to open their season. Green Bay has won its last five games against Chicago, but head coach Matt LaFleur said Fields presents new challenges.

"He’s got great arm talent, and then he also has the ability to escape and extend plays and make plays with his legs," he said.

Meanwhile, Rodgers seems to be finding his form after a rough start. The Packers have averaged 29 points in their last four games, putting them on par with the league's top teams. Rodgers knows he might not be a favorite among Bears fans, he said.

"We’ve had the upper hand for the last stretch, with (Brett) Favre and (me). It’s still a rivalry though. There’s still some great back-and-forth games," he said.

This season, Green Bay has struggled with injuries, but there's a silver lining, LaFleur said. More players have been able to gain game experience, and the Packers have still been winning. Offensive linemen Elgton Jenkins and Josh Myers practiced this week after injuries kept them out of last week’s nail-biter against Cincinnati.

"They're coming along," LaFleur said Thursday.

It's still unclear when left tackle David Bakhtiari might make his season debut after tearing his ACL last year. And the injuries aren't just limited to offense. Green Bay signed veteran cornerback Quinton Dunbar this week to add depth while Jaire Alexander is out with a shoulder injury.

"They've got a really good (defense). They've got a strong front seven, and they’ve got some guys on the back end that can cover as well," said Packers wide receiver Davante Adams. "I've definitely got respect for what they've got going on back there."

The Packers have won the NFC North each of the last two years. The Bears last won the division in 2018.