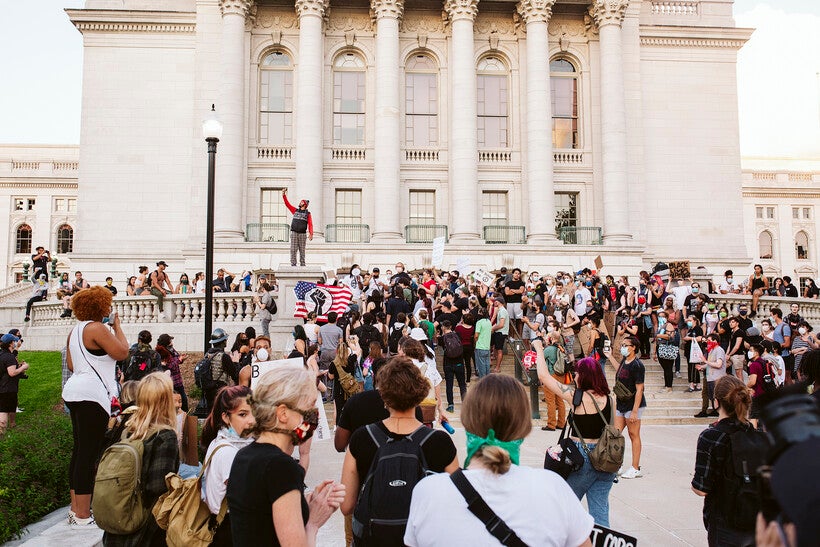 Demonstrators gather at the Wisconsin state Capitol in Madison, Wis. on June 3, 2020, to speak out against police violence and celebrate Black culture. Keni Rosales/WPR

More than a year after people in Madison joined worldwide protests against the murder of George Floyd by a Minneapolis police officer, the Madison Police Department on Tuesday released an independent review of its actions, which included citywide curfews and the use of tear gas.

The report, by the Quattrone Center for the Fair Administration of Justice, examined hundreds of hours of closed caption video along with social media reports and police radio calls as officers tried to quell six tense days that became flash points during a summer of unrest. Peaceful demonstrations sometimes turned violent, resulting in downtown stores being vandalized, statues at the state Capitol torn down and fires set.

The report noted the police department tried to change how it interacted with protesters as demonstrations continued and escalated, extending into late August after the shooting of Jacob Blake by Kenosha police.

"We did not find any instances of explicit racism. We did not find moments where we felt the department was acting wantonly as seen in my city of Philadelphia and other cities around the country," said John Hollway, the report’s author and director of the Quattrone Center. 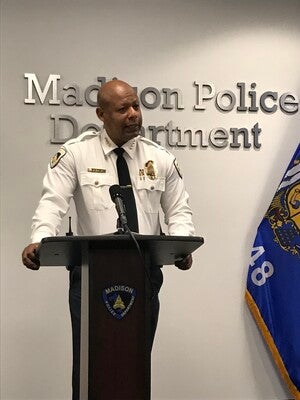 Madison Police Chief Shon Barnes says he'll implement all 69 recommendations in an outside review the department requested after local protests sparked by the murder of George Floyd by police in Minneapolis. At a press conference Tuesday, Barnes said body cameras for officers and vans to transport police quickly to flash points during protests are a necessary. Shamane Mills/WPR

Methods used in the past such as maintaining a dialogue with protesters weren't effective, the report said, in part because the bullhorns and police radios used by officers often couldn't be heard above the crowd. The report suggests Madison police should obtain voice amplification equipment for all special event officers who wear gas masks, to allow them to speak clearly with each other and with community members who are within voice range.

The report described Madison police as unprepared for the "scope and emotion" of the first protests after Floyd's killing, a characterization Madison's police chief didn't refute during a press conference Tuesday.

The independent review said demonstrations focused on decades of illegitimate police behavior in the U.S and the mere presence of officers, sometimes in riot gear, escalated violence. In one of 69 recommendations, the report suggests a "less is more" approach with a reduced police presence, coupled with a targeted and rapid response to isolate violent activity.

All police officers should also receive additional crowd control training, the report concluded. Those interviewed for the report — including 50 police officers in addition to protesters — suggested the police department look to the city's Police Civilian Oversight Board to foster better relations with the community and promote transparency and accountability.

The review of police actions was made more difficult, according to the report, because most Madison police don't wear body cameras which could have allowed a more thorough evaluation of officer's use of force which was criticized as excessive by some in the community.

Barnes said he supports body cameras for officers. Before such devices can be approved a pilot program would need to be adopted by the Common Council. A feasibility study released in January concluded that body-worn cameras function best if they are implemented as a part of comprehensive police reform.

Barnes said Tuesday he'll implement all 69 recommendations from the review.