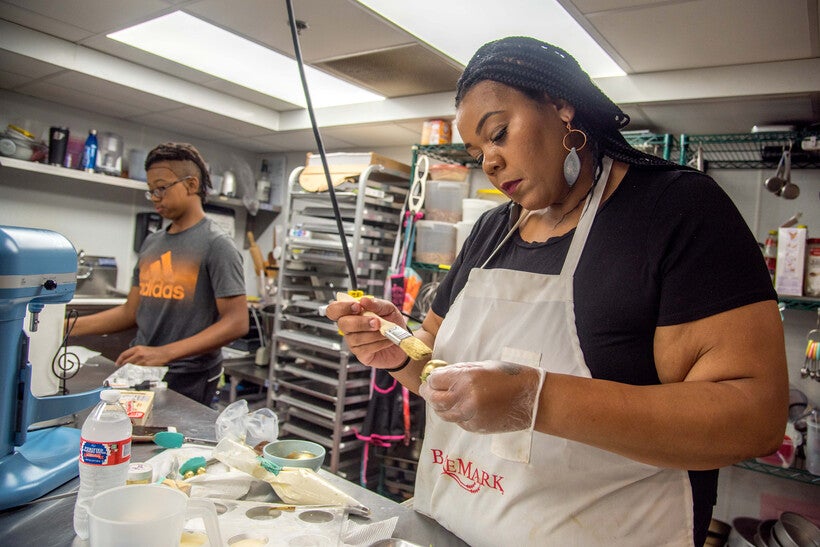 Adija Greer-Smith, right, decorates strawberries as her son Xavier Smith helps in the kitchen of her bakery, Confectionately Yours, in Milwaukee on July 2, 2020. Will Cioci/Wisconsin Watch

Outbreak Wisconsin: 'The People Just Want To Be Heard'

A Milwaukee Mother And Son Discuss Racial Justice And Education During The Pandemic
By Jimmy Gutierrez | News 414
Share:

Adija Greer-Smith is rarely alone these summer mornings when she drives to her Milwaukee bakery, Confectionately Yours. Her oldest son, Xavier Smith, offers conversation while riding shotgun.

"Xavier, how has the work experience been for you?" Greer-Smith asked Xavier on a recent drive. "As a 13-year-old being a part of the family business, I mean you work a lot. How does that make you feel?"

"It feels pretty good," he said. "I feel like it’s helped me with work skills, and certain things like that that will help me later on in life.

Greer-Smith nodded. That is her motive, she told Xavier. She wants Xavier and her youngest son, Malik, 10, to always better themselves — including their work ethics. The whole family faced a test last spring as the coronavirus struck, prompting the boy’s schooling to move completely online.

Greer-Smith called the transition "rough." Xavier, on the other hand, took to it.

"I liked it a little bit better than I did the normal, traditional style of learning," said Xavier, who served as student council president at Lake Shore Middle School in the Milwaukee suburb of Mequon. "It helped me with my grades, and it wasn’t as much of a hassle."

The pandemic is unfolding during a time of reckoning over racial injustice and police misconduct following the police killing of George Floyd in Minneapolis. And if students receive the green light to return to their schools this fall, Xavier will attend Homestead High School in Mequon. That’s the same school where a widely circulated video last month showed two students who appeared to mock Floyd’s killing.

"There are kids right in the high school that he’s going to next year that’s made a mockery of the George Floyd situation by posting pictures of them kneeling down on someone else’s neck as if it’s a joke," Greer-Smith said. "As if it’s funny, and it’s not."

Greer-Smith said her boys are asking questions about the Black Lives Matter movement. Milwaukee last week marked more than 50 consecutive days of protests in and around the city. Organizers of the largely peaceful protests say they have no plans to stop.

"As a black-owned business, I am not afraid of what’s going on, because I truly believe that the people just want to be heard," Greer-Smith said. "They want to be heard that the pain that we’ve had to endure for so long it’s over."

The financial news outlet 24/7 Wall Street last year called the Milwaukee metro area the worst place for Black Americans to live. The website analyzed quality of life for Black residents using eight measures, including: median household income ($29,928 per year, which was less than 44% than that of Milwaukee’s white residents), unemployment (13.9%, compared to 3.9% for whites) and homeownership rates (27.8%, compared to 68.2% for whites).

A new University of Wisconsin-Milwaukee study examined the decades of state and federal policies that fueled Milwaukee’s racial disparities.

"Milwaukee, in many ways, has emerged as the epitome of a 21st century racial regime: a metropolis of entrenched segregation and racial inequality, without the legal structure of Jim Crow but nonetheless with 'racial rules' — public policies, private-sector actions, and institutional practices — that undergird the persistence of caste-like conditions for vast numbers of Blacks in the metropolitan area," said the study released this week.

None of this needs to be spelled out for Greer-Smith and her family.

"The injustices that are going on in our community and our nation as a whole — it’s like past overdue to stop," Greer-Smith said.

That is why she makes sure to talk about it with her sons.

"I have to teach my sons that it’s okay for them to be comfortable in their skin — and not have to worry about if they’re going to be assassinated because of what they look like," she added. "In teaching Xavier the responsibilities of work ethic and hard work — all of these things, it’s just to better him as an individual."

Editor's note: Outbreak Wisconsin is a collaborative project by Wisconsin Watch and WPR following Wisconsin residents as they navigate life during the coronavirus pandemic. The residents will contribute diary entries, in the form of audio, video, text, drawings and photos of themselves, their families and personal and professional lives. That content will be supplemented by interviews and digital content to provide a full picture of how the pandemic is affecting all aspects of life in Wisconsin.