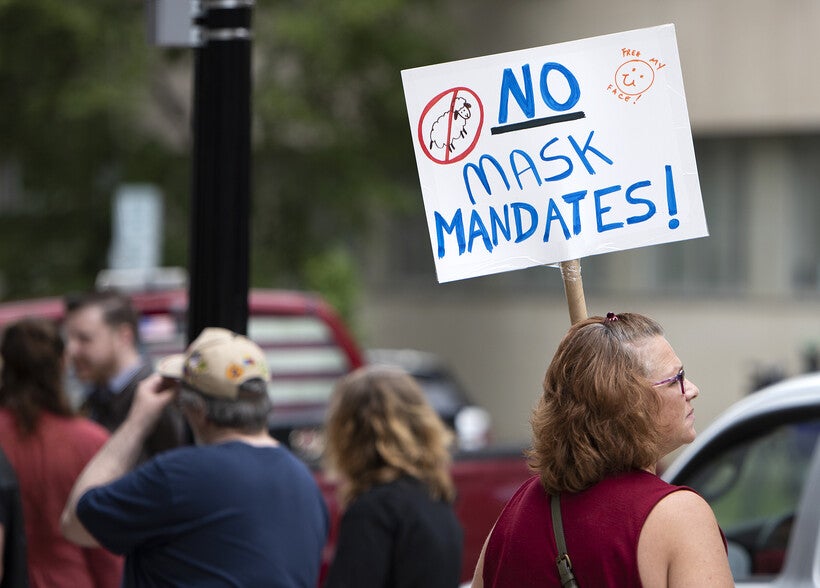 A woman holds up a sign with a message against mandated mask wearing on Thursday, July 23, 2020, in downtown Madison. The group of protesters later marched to the Wisconsin State Capitol. Angela Major/WPR

Gov. Tony Evers Hasn't Ruled Out A Statewide Mask Mandate, But Republicans Have Warned Against It
By Shawn Johnson
Share:

Wisconsin, like other states, has been figuring out this summer that the coronavirus isn't going away.

But compared to other states, where governors have unilaterally issued face mask mandates, Wisconsin's path forward is more complicated.

Plenty of Midwest governors have ordered the wearing of face masks, including the Democratic governors of Illinois, Michigan and Minnesota. Republican governors have done it, too, like Indiana Gov. Eric Holcomb and Ohio Gov. Mike DeWine.

In Wisconsin, Gov. Tony Evers wears a mask during his live-streamed briefings from the state Capitol, and he urges other people to do the same. But Evers says the May Supreme Court ruling that ended Wisconsin's "Safer at Home" order has, at least so far, kept him from mandating masks.

"We're looking at it, but frankly, the Supreme Court has made it very much more complex than what it ever should have been," Evers said at a recent briefing.

Evers' administration began the pandemic with broad authority to close businesses and ban large gatherings in the name of public health. The state Supreme Court took those powers away on May 13, leading Evers to suggest in the months since that he's all but powerless.

The court said Evers could write new pandemic rules with the blessing of the Legislature. Republican legislative leaders said earlier this year that they wanted to negotiate with the governor.

That changed after the court's ruling: Republicans backtracked, with Assembly Speaker Robin Vos, R-Rochester, saying more recently that local governments can handle their own COVID-19 responses.

Some cities and counties stepped in with their own health orders, only to roll them back under the threat of lawsuits. While Vos has said he supports local health orders, other Republican lawmakers have organized to fight them.

Meanwhile, both the number and percentage of positive COVID-19 cases have been on the rise in Wisconsin.

"The surge nationally is concentrated in the South and the Midwest is sort of following along," said Ajay Sethi, an associate professor in Population Health Sciences at the University of Wisconsin-Madison. "To wait for something wrong to happen, or bad to happen, before taking action is just not the kind of prevention mindset we need to handle this epidemic."

Evers May Have An Opening, Some Say

When it comes to acting unilaterally, it may well be that Evers is stuck.

The Supreme Court ruled that the governor's administration exceeded its authority when it unilaterally ordered businesses closed earlier this year. Future orders, the court ruled, must be issued through emergency rules, which lets GOP lawmakers veto any orders.

But Jeff Mandell, a Madison attorney who has worked for Democrats including Evers, said the Supreme Court's ruling gave the governor an opening.

"While colloquially, we talk about that case taking away the governor's order, what the case really did was strike down an order issued by the Secretary of the Department of Health Services," Mandell said.

In fact, the court made a point of noting that it was not ruling on the governor's emergency powers, which are spelled out in a separate state law from the one DHS Secretary Andrea Palm used to issue Wisconsin's "Safer at Home" extension.

Evers used those powers to declare an emergency when the coronavirus began to hit Wisconsin, but the declaration expired after 60 days. Mandell thinks Evers could declare a new emergency now, the kind that would let him order a mask mandate.

Mandell believes there's a sufficient basis for the governor to issue a new order with different parameters.

It would be up to the Wisconsin Supreme Court to weigh in on that argument, which raises another point that cannot be ignored: The court's conservative majority is about to narrow.

Jill Karofsky, a liberal, will replace outgoing Justice Daniel Kelly, a conservative, on the court on Aug. 1, trimming a 5-2 conservative majority to 4-3. That puts the focus squarely on conservative Justice Brian Hagedorn, who joined the court's liberals to side with the governor's administration in May.

But Mandell cautioned against reading too much into how Hagedorn might rule on a new case. Part of the reason Hagedorn ruled the way he did in May is that he thought the Legislature lacked the legal standing to bring the lawsuit.

Rick Esenberg, president and general counsel for the conservative Wisconsin Institute for Law and Liberty, said that could change if someone else, like a private citizen, brings a future lawsuit, and challenges the constitutionality of an executive order. Esenberg argued there's no legal justification for Evers issuing a new emergency order.

"One cannot simply extend those emergency powers in series. We can't simply redeclare the emergency over and over again if it is essentially seen as part of the same problem," Esenberg said.

Esenberg said Evers has another option: He can work with the Legislature, the way the Supreme Court intended.

The thing is, GOP leaders like Vos have opposed a statewide mask mandate.

"I don't think we need a mandatory mask requirement, simply from the fact that I think people will do what's right," Vos said on July 8. "They don't need a government mandate to do that."

In practice, that hasn't always come easy for local governments.

Last month, Winnebago County considered an ordinance to give its health officer broad authority to enforce local public health restrictions. The proposal pulled wording from state law that spells out the powers of local health officers, which include the option to swear in "quarantine guards" if necessary.

Winnebago County Executive Mark Harris said the county was concerned that without taking action, the Supreme Court's ruling would make it hard, if not impossible, to enforce any local health orders.

"And we would be reluctant to issue most orders if we couldn't enforce them," Harris said. "Because then you create an uneven playing field for those that will defy the order versus those that don't."

The Oshkosh Chamber of Commerce and state Rep. Michael Schraa, R-Oshkosh, pushed back, urging people to call the county board and testify against the idea.

The county eventually backed off, but the organized opposition continued.

During a July 21 meeting of the Winnebago County Board, conservatives turned out in force to testify against the idea of a county mask mandate, even though it wasn't even on the agenda.

"You can live without a mask," said Oskosh resident Thomas Hoversten. "This whole thing is a masquerade."

Sethi, the population health professor at the UW Madison, said wearing masks has become divisive, but it shouldn't be.

"There are people who question the validity of mask use when the evidence clearly points in the direction of wearing them," Sethi said. "They are effective, and some mask is clearly more effective than no mask."

Mask opponents are vocal, but in other states where COVID-19 cases have surged, polling suggests they're in the minority.

Quinnipiac University surveyed voters this month in Florida and Texas, two of the country's coronavirus hotspots. In Florida, 79 percent favored a mandatory mask policy. In Texas, the number was 80 percent.

In Winnebago County, the number of COVID-19 cases per 100,000 people has been lower than the statewide numbers. But Harris worries that could change.

"Our numbers are still relatively good," Harris said. "But, you know, the places that are having a real crisis could have all said that 60 days ago."