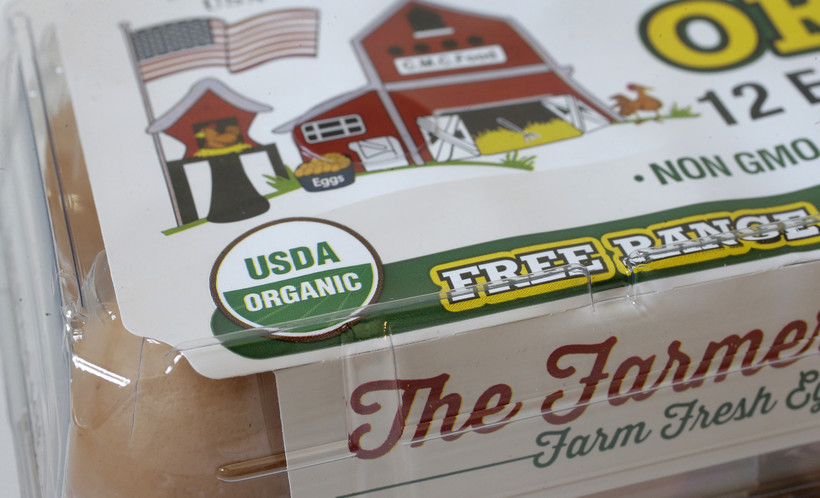 In this Monday, July 9, 2018 photo a "USDA Organic" label is printed on the label of a carton of a dozen eggs, in Walpole, Mass. The USDA Organic label generally signifies a product is made without synthetic pesticides and fertilizers, and that animals are raised according to certain standards. But disputes over the rules and reports of fraud may have some questioning whether the seal is worth the price. Steven Senne/AP Photo

Organic livestock producers in Wisconsin are applauding a revival of stricter federal standards for raising chickens and other livestock.

The rule added new provisions for livestock handling and transport as well as clarified living conditions for organically raised chickens, requiring all birds have access to the outdoors.

The rule was in part a response to some chicken producers' use of "porches," enclosed spaces with screens, as a way to meet requirements for outside access for animals.

But the Trump administration delayed and finally withdrew the rule in 2018, saying the U.S. Department of Agriculture did not have the authority to issue the regulations.

In June, Vilsack, now secretary under President Joe Biden, announced the agency would be reconsidering that interpretation and take the standards one step further.

"I have directed the National Organic Program to begin a rulemaking to address this statutory interpretation and to include a proposal to disallow the use of porches as outdoor space in organic production over time and on other topics that were the subject of the OLPP final rule," Vilsack said in a statement.

Vilsack said he anticipated having a proposed rule within six to nine months.

Steve Hartwig produces organic eggs at farms in Fort Atkinson and Johnson Creek. He said not having a clear standard around outdoor access for chickens and other poultry has created an unfair playing field in the market.

Hartwig said most small and moderately sized farms maintain a smaller number of birds in order to have enough pasture space for them to forage. But he said the largest organic farms look more like conventional egg operations, with animals confined to closely-packed buildings.

"They’re able to do it at a lot lesser cost, and they don't have to have all of this acreage available to try and meet a (forage space) standard," Hartwig said.

Adam Warthesen, director of government and industry affairs for Organic Valley, said this divergence in how current organic standards are interpreted is most prominent for poultry producers, but the new welfare rule does codify some important practices for dairy cattle and hogs.

Warthesen said creating an enforceable standard will also help the industry preserve the integrity of the organic label.

"Our interest at the co-op is making sure that what farmers are doing on the land and with their animals comports with what consumers believe sort of is in organic ag," Warthesen said. "Everything we know is that consumers believe those chickens are living the happiest healthy lives they can and that means they're going outside just like their kids are going outside."

Kevin Mahalko is an organic dairy farmer in Gilman and is a consultant for the Midwest Organic and Sustainable Education Service. He said most organic farmers in Wisconsin are ready for the USDA to finally put the animal welfare rule in place. And he said many producers would like the agency to go one step further by considering new research and best practices that have come to light since 2017.

"Within the organic farming community, the farmers are always interested in kind of updating standards, having their own rule system, having as much integrity as we can get," Mahalko said. "Having the federal organic standard, we want to have input and also have oversight to make sure these standards and practices are being upheld throughout the country."

He said that means having a robust certification regime and the federal regulation to back up any enforcement action that needs to be taken.

Mahalko said that consistency is important in order to help more farmers transition or start in the organic industry. And he believes having stricter standards for livestock and poultry practices will help keep the industry focused on family run and locally focused operations.