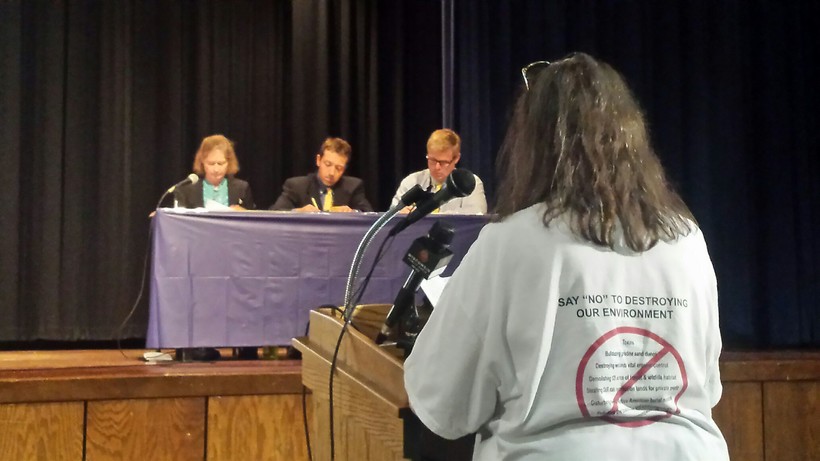 A member of Friends of the Black River Forest (right) testifies at Wednesday night's DNR hearing in Sheboygan Falls.

Critics well outnumbered supporters at a state Department of Natural Resources hearing in Sheboygan Falls on Wednesday night, as dozens testified on a state review of the Kohler Co.'s plan to build an elite golf course on its property along Lake Michigan just north of Kohler-Andrae State Park, in the Sheboygan County Town of Wilson.

But town resident James Tobin said his community isn't looking for economic development at the expense of the environment.

"The Town of Wilson doesn't want to be a world class destination," Tobin said. "It would rather be like the fictional Lake Wobegon, a little town the world forgot."

Other critics said the golf course would harm water and wildlife and use too much of the state park. Kohler said an easement would only use four acres of the park, but opponents say 20 acres could be disrupted.

Kohler project team leader Jay Hoekstra said his firm would take many precautions in all phases.

"Being a good neighbor is important to us. We're pleased that this project will enhance the diversity of existing environs, and create public access to the site," Hoekstra said.

Many at the hearing also questioned the adequacy of the DNR's draft environmental impact statement. Carl Schwartz, of the Wisconsin Society for Ornithology, said the state's document lacks analysis of what cutting trees on the forested land would mean for breeding and migrating birds.

"WSO believes that this a significant omission and it needs to be corrected," said Schwartz.

Some others, though, like Wilson resident Mark Lyder said the DNR review is thorough.

"I have read very closely the DNR's nearly 100-page draft environmental impact statement. I was pretty impressed with its breadth, depth and detail," said Lyder.