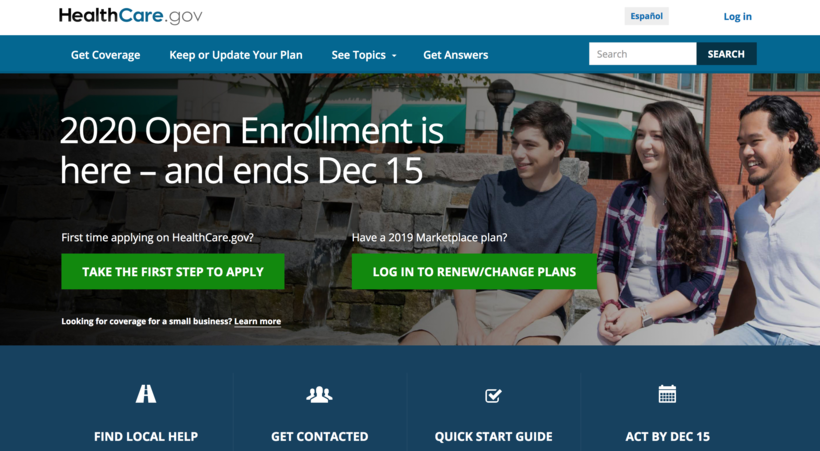 A screenshot of the online health care marketplace Friday, Dec. 13, 2019.

Only Days Left To Enroll In Health Insurance Through Federal Marketplace

There are only two more days to sign up for insurance sold on the federal marketplace Healthcare.gov.

During the six-week enrollment period ending Sunday, there have been concerns about sagging signup numbers and whether people were buying coverage that would meet their needs.

In November, Sen. Tammy Baldwin, D-Wisconsin, sent a letter to the Trump administration criticizing efforts to promote what she and others call "junk plans." These plans don’t have to cover pre-existing conditions, which is one reason AARP generally opposes them.

"They also don’t have to comply with something called 'age rating,' which means they can charge older people whatever they want. They don’t have to follow some of the limits that were set by the Affordable Care Act," said AARP Wisconsin advocacy director Lisa Lamkins.

Generally, these plans are cheaper because they offer less coverage than traditional health insurance.

"There are many situations where individuals need some short-term coverage anywhere from three months to a year," said Scott Kowalski executive vice president of communications and marketing for Wisconsin Physicians Service Insurance Corporation (WPS). "Perhaps they’re between jobs. This is a less expensive option than COBRA."

COBRA is a federal law under which departing workers can continue getting health benefits but have to pay the entire cost of the premium.

A report from an advocacy group found at least eight companies selling such plans in Wisconsin this year, including WPS. The group Kids Forward is concerned that people buying the plans will be surprised by large medicals bills they thought were covered. Some states have banned short-term plans, which are required to include a disclaimer warning consumers to check their policy for exclusions or limitations.

"The intent of the Affordable Care Act was to make these short-term plans a bridge between comprehensive health coverage, not a substitute for them," said William Parke-Sutherland, who co-wrote the Kids Forward report.

The market for ACA plans has stabilized in Wisconsin and the Evers administration said consumers have more options than in the past.

Enrollment so far is lower than last year. In Wisconsin, the latest figures show 94,749 have signed up for coverage starting in 2020.

State health officials say the drop in enrollment may be a result of consumers finding coverage elsewhere or the federal government policy of automatically re-enrolling people if they don’t log into Heathcare.gov to update their application and shop.