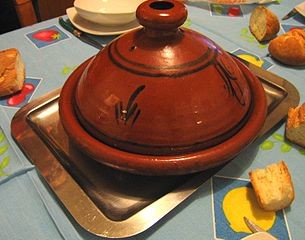 A tajine is just one of the interesting one-pot options that Chef Clifford Wright uses. Image by Wikimedia Commons user Iron Bishop.

No Need For Hours Of Cleanup After Dinner
By Judith Siers-Poisson
Share:

Cooking healthy and delicious meals is great, but not when it means a stack of pots and pans to wash.

Fortunately, chef Clifford Wright has taken on the challenge of delicious and satisfying meals that only leave the cook with one pan to wash afterward.

Wright is the author of 14 cookbooks, including his latest three, "One-Pot Wonders," "Hot & Cheesy" and "The Best Soups in the World." His articles on food and cuisine have appeared in Gourmet, Bon Appetit, Food and Wine, Saveur and other magazines. Wright was also the winner of the James Beard/KitchenAid Cookbook of the Year in 2000 and winner of the Beard Award for the "Best Writing on Food" for 2000.

For Wright, for a recipe to be a one-pot wonder, it means two things: Some recipes say they are a one-pot dish because everything ends up in one pot at the end, but the cook has used a bunch of different pots in the process leading up to that final stage. But not by Wright’s definition.

“From beginning to end, you are only using one cooking vessel. And that vessel could be a stew pot, a soup pot, or a wok, or a skillet. The point being it’s only one thing that you end up cleaning at the end of the day,” he said.

Beyond the usual pots, pans and casserole dishes, Wright also includes cast-iron skillets, a griddle, a deep fryer, a grill, a fish poacher, a tajine, a wok, a paella pan and even a salad bowl as one-pot cooking vessels.

The second part of the definition for Wright is “the ‘wonder’ part! This stuff has got to taste great.” So, this cookbook represents Wright’s favorite meals to cook, adapted to a one-pot method.

Wright said that not only are his adult children a big part of his taste testing crew, but the one-pot idea was really encouraged by one of his children. Having moved back in with Wright after college, one son’s job was to clean up after meals. And Wright couldn’t help but notice when his dishwasher would react happily to just one pot to wash.

Wright agreed. “Clean-up is something that you really don’t want to get too involved in. That’s not the fun part of cooking, but it’s one of the necessary parts,” he said.

“It’s not easy at all!” Wright said. “There are a lot of things you’ve got to do sometimes to prepare a dish for its final serving.”

For example, different components, like a piece of meat and potatoes, might need to be cooked differently and for different lengths of time.

Here are three recipes that Clifford Wright shared with listeners.

Beef short ribs covered with a Wine sauce, the meat nearly falling off the bone is a very appealing sight. The waiting aroma of well-cooked, aromatic short ribs having braised for hours is one of the most satisfying. Short ribs come from the short plate of the cow, the underside of the animal below where the ribs roasts would be cut. They are sold in supermarkets labeled as "beef short ribs,” so they should be easy to find. The short ribs need to cook for a long time, until very tender and the meat is barely clinging to the bones. The pancetta in this recipe is meant to replace the traditional petit salé, a lean salt pork used in French country cooking. Because the wine is an important part of this stew, you should use a good Merlot or Burgundy, something you would be pleased to drink, too. Serve with crusty French or Italian bread and a light green salad.

1. In a large, heavy flameproof baking casserole, melt the butter over medium high heat with the pancetta while stirring. Dredge the beef short ribs in flour, tapping off the excess. Once the pancetta is sizzling, add the short ribs to the casserole and cook, turning with tongs, until the beef is browned on all sides, about 8 minutes. Add the onion, carrots, parsnips, and garlic and cook, stirring frequently, until the vegetables are slightly softened, about 10 minutes. Add the mushrooms and cook, stirring, for 5 minutes. Pour in the wine, season with salt and pepper, add the summer savory, and stir everything in together.

2. Reduce the heat to very 10W and simmer, covered, until the beef is tender, about 4 hours. (If your simmer control doesn’t go low enough, you can use a heat diffuser.)

3. Remove the cover, stir in the green beans, and continue cooking until the meat is falling off the bone and the sauce is syrupy, about another 11/2 hours. Serve hot.

This vegetarian burrito is full of spicy, satisfying flavor. You can replace the mildly hot Anaheim chiles with a red bell pepper if you want, and the Cream cheese may be replaced with shredded Colby cheese. Served sliced avocado and sour cream, it's a meal in itself.

2. Place the Anaheim chiles on a rack set over a burner on high heat and roast until their skins blister black on all sides, turning occasionally with tongs. Remove the chiles and place in a paper or heavy plastic bag to steam for 20 minutes, which will make peeling them easier. When cool enough to handle, rub OIT as much blackened peel as you can and remove the seeds by rubbing with a paper towel (to avoid Washing away' flavorful juices) or by rinsing under running water (to remove more easily). Chop the chiles.

3. Wrap the burritos in aluminum foil and heat in the oven for l5 minutes.

5. Spoon the mixture in the middle of each of the tortillas. Fold the tortillas over the filling once, then fold the two sides over into the middle and continue rolling. Serve immediately with the sour cream and avocado.

This spicy hot dish from Goa on India’s West Coast is typical fare in most Indian restaurants. In this recipe it's made with turkey rather than chicken and is served with warmed naan or other flatbread.

1. in a small bowl, mix the coriander, turmeric, cumin, and cloves together. In a blender, blend together the spice mixture, chiles, ginger, garlic, and vinegar until Smooth.

2. In a large sauté pan, heat the oil over medium heat, then add the onions and cook, stirring, until golden, about 20 minutes. Add the turkey, potatoes, Water, cinnamon stick, salt, and the vinegar mixture from the blender, cover, reduce the heat to low, and simmer, stirring occasionally, until the turkey and potatoes are tender, about l hour. Add the peas 5 minutes before the turkey is done. Remove and discard the cinnamon stick. Serve hot.