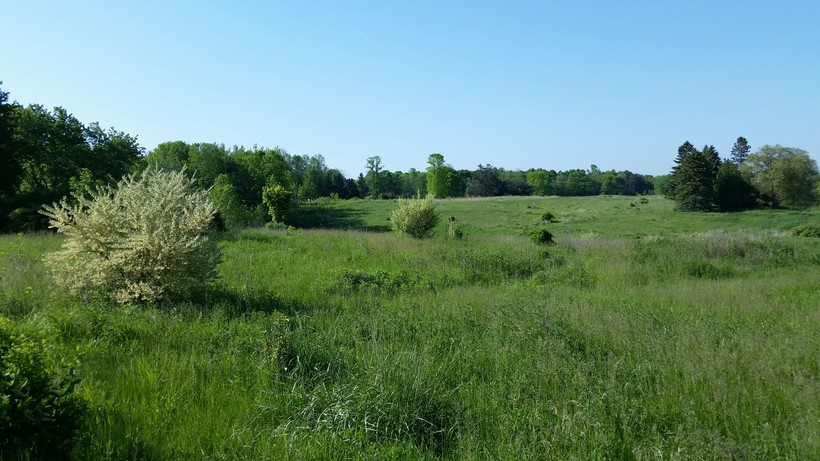 A former golf fairway at the Forest Beach Migratory Preserve.

The 117th U.S. Open men's golf championship  got underway Thursday at the Erin Hills course 25 miles northwest of Milwaukee. Tens of thousands of people are expected to attend the four-day tournament. It's a boost for the golfing industry in the state, which has seen only slow growth or, in some cases, decline over the last decade.

A few courses in Wisconsin have even closed, and become wildlife areas.

A few miles west of Mukwonago, in Waukesha County, there used to be two golf courses at the Rainbow Springs Resort. They were called Big Mo, and Little Mo. A lodge built 50 years ago failed early on, but the quirky courses — a skull and crossbones flag flew at Big Mo's difficult 12th hole — stayed open until 2010. Then, the Wisconsin Department of Natural Resources acquired the 970 acres, mainly using state Stewardship Fund dollars. The department tore down most of the old buildings, stopped using bug and weed killers, and let the grass, weeds and small trees grow. This time of year, the vegetation is waist-high.

On a recent visit to the former site of Big Mo, DNR property manager Anne Korman pointed out the view of the first, 10th and 18th holes from what used to be a tee box.

"The earth, right now it's healing. This land is healing, it's in a healing stage," Korman said. "It was subjected to pesticides and herbicides for many years, and now. it's not."

The absence of new chemicals is not only good for the land, it also benefits the Mukwonago River which flows through Rainbow Springs.

According to Korman, the sediments are cleaner now and there are more species of fish. The river also flows more naturally because most culverts have been removed.

Another added benefit, she said, is that it's now safer for kayakers or canoers who, "no longer have to worry about being hit by a golf ball when you're out here paddling."

The DNR is nearly done with its master plan for the area. After that, Korman hopes the agency budget will eventually allow for more planting of native species, cover the cost of tearing down of the old golf clubhouse, and other improvements. But she said Rainbow Springs, or technically the Kettle Moraine State Forest-Mukwonago River Unit, will have to compete for dollars with a lot of other state lands. The Mukwonago River passes by a former golf green at the Rainbow Springs property. Chuck Quirmbach/WPR

The transformation to wildlife sanctuary is further along at another former golf course a few miles north of Port Washington.

For about a decade , the 116-acre site near Lake Michigan formerly known as The Squires Golf Club  has been the Forest Beach Migratory Preserve. People who remember the layout of the golf course can still make out the former holes, but it's harder to do now than at Rainbow Springs.

The nonprofit land owner of the preserve, the Ozaukee Washington Land Trust, has built a two-story viewing stand. Executive director Tom Stolp said birders, including from the Western Great Lakes Bird and Bat Observatory based in the old Squires pro shop, have spotted about 250 species.

The diversity is due to different habitats that were created, Stolp said.

"Whereas a golf course probably has a more of a mono-culture habitat, we have eight different distinct habitats," he explained. "There are 27 different wetlands across this property. The way we've been able restore native vegetative species to the landscape has meant there's more bugs, more seeds from the plants, more food for the migrating birds."

Stolp said the Land Trust plans to improve the preserve by planting more native species and trying to get rid of invasives.

While Stolp's group continues it's effort to erase golf from the landscape, he said he has nothing against the sport, and acknowledges there are still plenty of fine courses in the area.

That includes the challenging layout the pros are playing this week at Erin Hills, where birdies of a different sort may still be hard to come by.