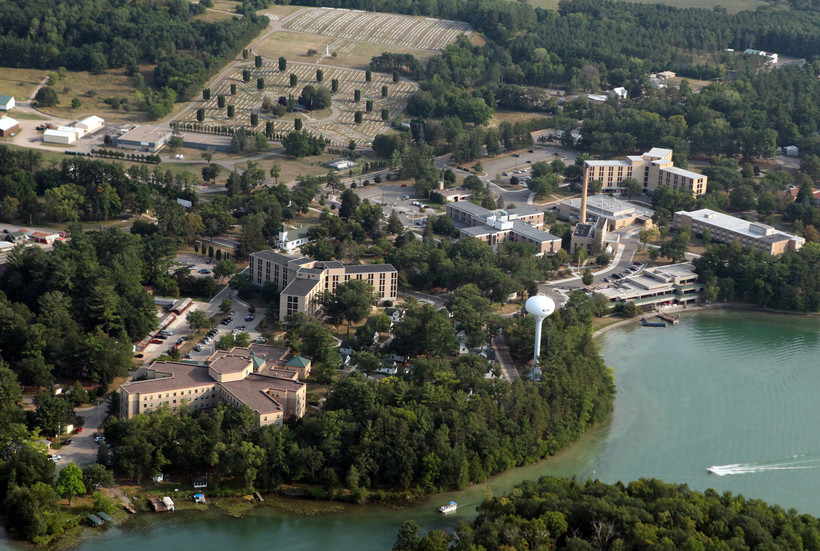 The Veterans Home at King. Wisconsin Department of Veterans Affairs

For the first five months of the coronavirus pandemic, Wisconsin’s three state veterans homes did not see any positive cases among residents.

"Early on, I think our ability to keep things at bay had largely to do with our infection control procedures, but also with kind of the slower spread around the state," Lynch said. "As time has passed and people are starting to be in more confined spaces again, we’re seeing an uptick in the prevalence of positive cases."

As of last week, there have been 47 coronavirus-related deaths at state veterans homes. Thirty-six of those deaths were at the state Veterans Home at King, which currently has 403 residents. The Union Grove Home has had 10 deaths out of 133 residents and Chippewa Falls Home has had one death out of 70 residents.

Lynch said increased community spread of the virus has meant a higher chance for residents to be exposed when leaving a home for medical care or for staff members to be exposed outside of work.

In the last two months, Lynch said state homes have gained the ability perform antigen tests, which produce a result in about 15 minutes. She said the facilities are now testing all staff and residents twice per week instead of waiting until someone has symptoms. But she points out that almost every county in the state has a critically high level of case activity, according to the state Department of Health Services.

Lynch said the veterans homes are often under increased scrutiny because they’re operated by the state.

"Oftentimes when I’m asked by reporters... 'How did it get into the building?', the first place people look at is the staff. But without those staff, we don't have the ability to care for the people that are in our care," Lynch said. "We have to understand and appreciate that they have, at the end of their shift, a life to go home to. They have to pick their children up from school or daycare or go to the grocery store or go to their own medical appointment."

Lynch said staff who test positive or who were exposed to a known case are not allowed to return to work for 14 days. That puts additional pressure on employees to make up the extra work and has left the state facilities shorthanded at times. Lynch said the state has twice called on the federal Department of Veterans Affairs to help with staffing after experiencing outbreaks among staff.

Dr. Michael Erdmann, chief of staff of the Milwaukee VA Medical Center, said his facility has helped respond to the need for staffing at state homes.

But he said federal veterans facilities are facing their own challenges with ensuring they have the capacity to care for an increasing number of COVID-19 patients while more staff test positive for the virus.

Erdmann said the Milwaukee VA has recently had to cancel some elective procedures to ensure they have enough beds available.

"The majority of our patients don't have COVID and they have diseases that we need to take care of," Erdmann said. "It hurts me to not be able to provide all of the things that we’d like to do under normal situations. But this is not normal times and we need to protect our veterans as best we can."

The Milwaukee VA’s nursing home facility has had seven COVID-19 cases in the last month out of around 110 residents.

Erdmann said they continue to restrict visitors and residents from leaving the long-term care units to prevent exposure. He said the medical center continues to do regular surveillance testing of staff and patients to help identify cases early and prevent spread.

Because the nursing home is a part of the medical center, Erdmann said the facility is able to quickly isolate residents who test positive or transfer patients who need advanced care to other units.

For state veterans homes, the relationship with local hospital capacity is more complicated.

"Hospitals are dependent on us to be able to continue to take admissions," Lynch said. "Therein lies part of the rub, if you will. (The Centers of Medicare & Medicaid Services) says if you have active COVID cases in your membership, then you should not be taking admissions."

She said each facility has a designated area to isolate residents who test positive and has done their best to continue to accept patients.

With the upcoming holidays, Lynch said she knows it will be hard on residents after not seeing family and friends for months.

"The holidays is always a time for family and friends. So I think this can be and has the potential to be very challenging and sad for folks," Lynch said.

But she discouraged families from taking residents out to attend holiday gatherings, saying the risk is too great.

Erdmann said his facility has also been encouraging their staff members to follow public health recommendations and avoid social gatherings for the holidays.

"We don't want to inadvertently infect one of our elderly loved ones just because we wanted to share a meal at thanksgiving time," Erdmann said. "We need to remember that it's not too far off that we’re going to have effective vaccines, it appears. And we can get back to gathering together as families and loved ones."