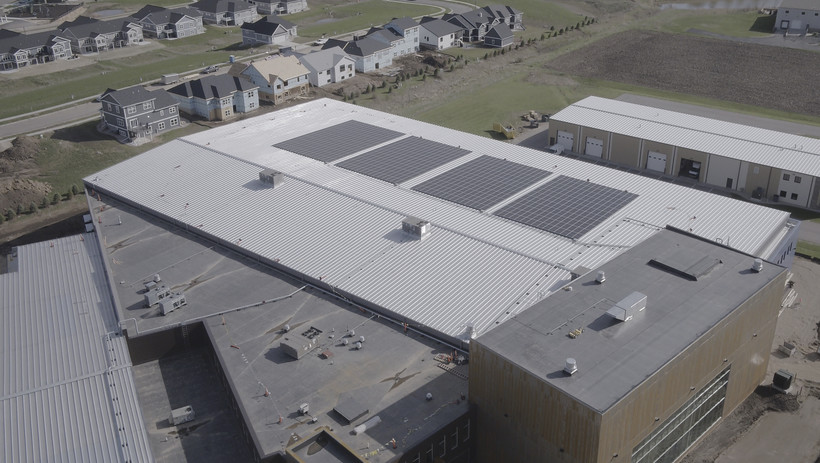 The company expects to save money, slash emissions, create new job opportunities for at least 150 people in the Waunakee area
By Gaby Vinick
Share:

Octopi Brewing is unveiling new facilities in Waunakee as part of a $62 million development that makes it the first solar and battery storage project in Dane County, brewery founder Isaac Showaki said.

It's a massive undertaking for the startup. Showaki founded the company in 2015 — when it had just six employees — and credits local lenders, state agencies and community banks for investing in its future.

"It feels amazing," Showaki said. "We want to grow with our community, we want to be a key player in Waunakee. We're very blessed to be here."

It's a timely celebration for the expansion during National Clean Energy Week.

The solar panels will power the brewery and feed batteries to store energy for when the sun isn't shining.

"I'm creating free energy from the sun," Showaki said, adding that the battery is "the kicker."

"Solar panels are great, but they can only take you so far," he said.

With both installed, the company can run its operations even if the electric grid is down because of the battery storage, which also works like a backup generator.

In total, 660 solar panels that were installed on Octopi Brewing's rooftop will produce 270 kilowatts, and the battery has the capacity to store 536 kilowatts of power. It will support 25 percent of the company's needs. Since the system went live in May, it has saved Octopi $13,000, Showaki said.

The Wisconsin Economic Development Corp., or WEDC, is also supporting the project by authorizing up to $800,000 in state income tax credits over the next five years.

"This is one of the best stories we can tell about WEDC," said Sam Rikkers, deputy secretary and COO of WEDC.

The expansion will create 150 new jobs — operators, warehouse workers, engineers and plant managers, among others.

"What's really neat, though, is that not only are they a company that's growing, hiring, but they're also committed to really doing so in a green way, in a way that's promoting energy efficiency," Rikkers said.

Those solar panels will last at least 25 years, according to the PSC’s Huebner.

The entrepreneurial Showaki is already onto his next venture. He hopes to build a wastewater facility in the next two or three years.

"At the end of the day, we want to be a company that's good for the environment," he said.