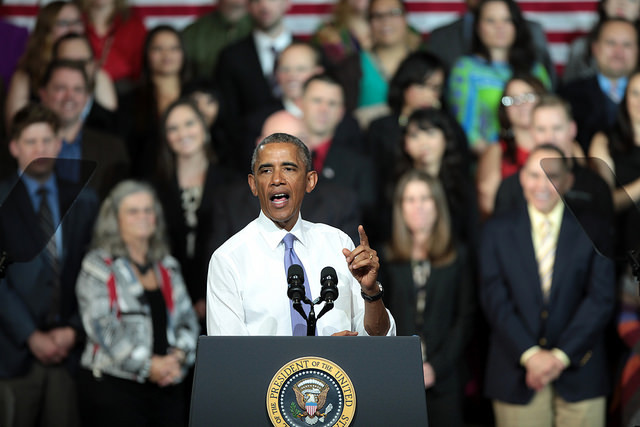 President Barack Obama during a recent address at a high school in Phoenix.

Gov. Scott Walker had signed off on the right-to-work bill earlier that day, proclaiming that the law is yet another policy that will entice businesses to operate in Wisconsin. Obama, however, described right to work as an "anti-worker law."

It’s no coincidence that the rise of the middle class in America coincided in large part with the rise of unions – workers who organized together for higher wages, better working conditions, and the benefits and protections that most workers take for granted today. So it’s inexcusable that, over the past several years, just when middle-class families and workers need that kind of security the most, there’s been a sustained, coordinated assault on unions, led by powerful interests and their allies in government.

So I’m deeply disappointed that a new anti-worker law in Wisconsin will weaken, rather than strengthen workers in the new economy. Wisconsin is a state built by labor, with a proud pro-worker past. So even as its governor claims victory over working Americans, I’d encourage him to try and score a victory for working Americans – by taking meaningful action to raise their wages and offer them the security of paid leave. That’s how you give hardworking middle-class families a fair shot in the new economy – not by stripping their rights in the workplace, but by offering them all the tools they need to get ahead.

Gov. Scott Walker has since responded to Obama's criticism of the law with a statement of his own. In it, he said President Barack Obama should be looking to states like Wisconsin as examples for how to grow the economy, rather than criticize his signing of a right-to-work bill into law. Walker said in his statement that the law gives workers the power to choose and provides the state with "one more tool to encourage job creators to continue investing and expanding."