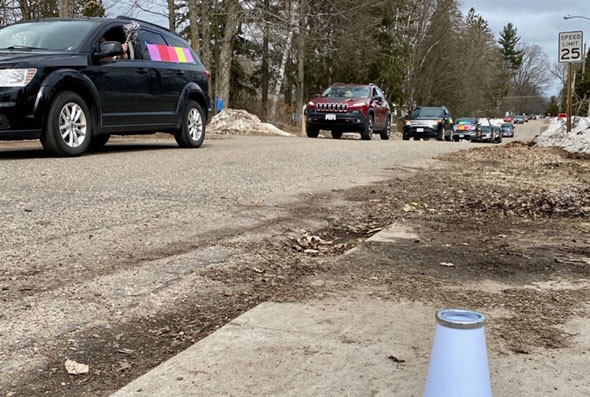 Staff at one northern Wisconsin school held parades Tuesday to show students they are missed. While such acts may seem harmless, health experts are reinforcing that social distancing is necessary to slow the spread of the new coronavirus.

Gov. Tony Evers issued a "safer-at-home" order last week banning public gatherings and non-essential business with limited exceptions. State health officials are urging people to stay home as much as possible and observe social distancing requirements, such as washing hands and keeping 6 feet of space from others.

"We're a really close-knit community here in Crandon and the school is really central to that. And not being able to be in contact and things, we just kind of wanted the kids and the families to know that we're still there for them," she said.

Staff took to their vehicles and drove around town, honking their horns and waving colored flags. A video taken by one staff member shows some had signs taped to the windows, saying "We Miss You" and "We Love You."

Children were standing on their lawns, driveways or on the sidewalk with their families, Resch-Brownell said. Others sat in parked cars. But she said everyone was practicing social distancing.

Greta Krueger Williams said she, her daughter Kirkland and son Mac watched the parade from their front porch, cheering on the parade with cowbells.

"It was good for the kids to kind of see their teachers back out and around. I mean, the fact of the matter is they see them every day. They're kind of like family," said Krueger Williams.

She said the parades sent a message that life carries on as everyone is adjusting to a new normal in the age of coronavirus and social distancing.

"It's been pretty, pretty dark and quiet around, which is good," she said. "I think that's what people are supposed to be doing."

Dr. Jeff Pothof, chief quality officer at UW Health, said he isn't opposed to such events, but people really can't cheat on keeping at least 6 feet of distance between them and others.

"In its purest form, it seems like it's OK to do, but I think we all know that sometimes, it can be easy to cut corners on that," said Pothof. "So we just have to be diligent that we keep that social distancing even when we try to do these things."

Pothof said such acts could potentially become a problem if people start to mingle with their neighbors or different households. He said it seems innocent, but health officials are not recommending that right now.

Bud Chumbley, CEO of the Wisconsin Medical Society, also worries that there's a chance of transmission during such gatherings.

"The key to preventing the spread as we've all heard is to wash your hands frequently, to not touch your face, and stay away from a large number of people who could have the virus," he said.

Resch-Brownell said she is proud of the school for going above and beyond to make these changes less traumatic for students.

"We need the kids as much as they need us," she said. "And, we just wanted them to know that we're still here for them even though we're not together."