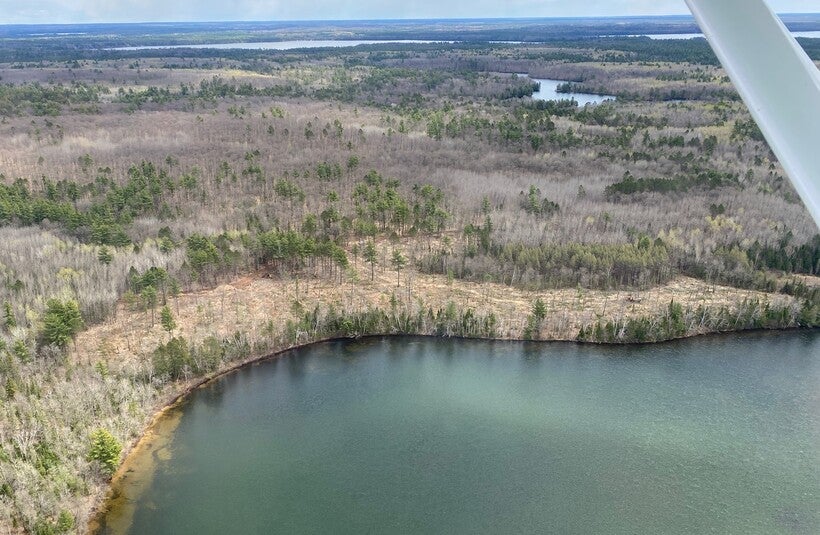 Northern Wisconsin residents are accusing the Wisconsin DNR of administering timber sales that allow harvesting too close to the water along lakeshores in the Northern Highland American Legion State Forest, including Upper Gresham Lake. Photo courtesy of Ardis Berghoff

One Sunday morning in April two years ago, Ardis Berghoff set out with her friend John Schwarzmann for an early morning hike in the state forest around Whitney Lake near the town of Boulder Junction in northern Wisconsin.

"We started seeing paint marks on trees, and we both knew that was marking a timber sale. And as we got closer and closer to the lake, John got quieter and quieter," said Berghoff. "And I was just exclaiming out loud over and over again, 'My gosh. This looks like a heavy timber sale.'"

What they saw concerned Schwarzmann, who formerly served as a forest supervisor for the Wisconsin Board of Commissioners of Public Lands. He said loggers were harvesting too close to the water and not leaving enough trees evenly spaced on land along the lakeshore’s edge.

"We didn't know whether Whitney was an anomaly or not," said Schwarzmann.

The two set out to confirm what they feared they were seeing, counting trees and measuring the depth of the zone where trees were harvested. Their findings indicated the Wisconsin Department of Natural Resources was violating its own forestry standards for protecting water quality with the timber sale.

Each state is tasked with developing standards for water quality and monitoring forestry practices to ensure they comply with the Clean Water Act to control runoff from logging. The Wisconsin DNR has a manual outlining best management practices to protect water quality. Those standards are mandatory at timber sales on public lands, including state forests.

The two reached out to the DNR, and agency staff met with them to address their findings.

"We tried to address some of their concerns through emails and field visits, and they still felt like we weren't in compliance with that field manual," said Tom Shockley, the DNR’s forestry team leader for the Northern Highland-American Legion State Forest.

An aerial view of Whitney Lake after a timber harvest in Oct. 2021. Photo courtesy of the Wisconsin DNR

Now, the dispute over compliance with those standards has resulted in multiple audits by the DNR’s auditor SCS Global Services. The auditor evaluates the agency each year to determine whether it's meeting requirements to retain its Forest Stewardship Council certification. The certification ensures products come from forests that meet environmental, social and economic benefits.

Berghoff said that certification may be threatened if the DNR doesn’t change its ways, but the agency maintains it’s done nothing wrong. Neither residents nor the DNR is backing down as a new investigation is now being mounted by the auditor’s accreditation body in Germany: Assurance Services International.

ASI, which assures sustainability standards are met, has agreed to investigate. Although, no on-site visit has yet been scheduled to examine residents' concerns.

Berghoff and Schwarzmann first filed a complaint after a 2020 audit of the DNR’s practices by SCS Global Services. In response, the company conducted a desk audit of the timber sale on Whitney Lake. That audit initially found in April last year that the agency wasn’t in compliance with its standards.

At first, the DNR’s auditor found the Whitney Lake timber sale failed to comply with DNR standards for water quality because trees were cut less than 100 ft. from the lakeshore and not evenly distributed.

The DNR appealed, and last year, the auditor reversed those findings. SCS Global Services blamed it on a misunderstanding between how the DNR and residents viewed the 100-ft. buffer zone that the agency recommends for logging near lakeshores.

Berghoff and Schwarzmann maintain a spot-painted red line marked the edge of that zone. However, the DNR claims the red line designated an area where logging equipment isn’t allowed. 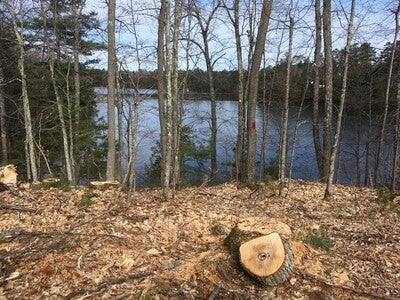 A section of lakeshore at Trout Lake in northern Wisconsin. Residents say the DNR allowed a timber harvest to occur within just 50 ft. of the lake, violating recommended standards to protect water quality.
Photo courtesy of Ardis Berghoff

"(I)t was clarified by the DNR that the red line is only the equipment exclusion zone, and that the (riparian management zone) should be measured 100 ft from the (ordinary high water mark), including areas falling outside the EEZ and available for harvest," the audit states.

Berghoff and Schwarzmann questioned how the DNR can maintain quality control without marking the area where cutting isn’t allowed.

"How are you supposed to effectively manage such an important sensitive area, not only for protecting water quality, but for wildlife habitat, if all of a sudden you're saying you don't mark it," said Berghoff.

Shockley noted the DNR provides loggers with paper and digital maps, so they know the boundaries of a timber sale. He added the agency’s manual allows the DNR to change its practices.

"We have the flexibility to make adjustments as long as water quality is protected," said Shockley.

Since 1995, the Wisconsin DNR has been monitoring state lands as well as other landowners in Wisconsin to gauge whether forestry activities affect water quality, including at Northern Highland-American Legion State Forest.

"Our land management on those sites has balanced both water quality, as well as the different management objectives. I have not seen any instances where we've impacted water quality," said Carmen Hardin, the DNR’s applied forestry bureau director.

Teams that monitor water quality found those standards were correctly applied 97.2 percent of the time among 38 sites selected out of 234 timber harvests on state lands in 2018, according to the DNR’s most recent monitoring report for those properties.

An aerial view of Whitney Lake after a timber harvest in Oct. 2021. Photo courtesy of the Wisconsin DNR

Berghoff said only 11 of the sites monitored that year bordered lakes, arguing the sample size was too small to evaluate effects on water quality. She also highlighted the DNR’s monitoring is based on observations and not quantitative data, which the agency notes can lead to biased results.

The DNR said they try to limit the effects of bias on water quality monitoring of sites "to the best possible extent." The agency notes sites rely on observations to rate effectiveness of efforts to protect water quality because it limits time and costs, adding that they try to reduce bias by providing consistent training.

A more recent summary found standards were correctly applied more than 98 percent of the time on state lands from 2018-2020 at timber harvests and buffer zones near water, according to the DNR.

Berghoff and Schwarzmann want the DNR to suspend all logging within 250 ft. of lakeshores in the Northern Highland-American Legion State Forest.

The two independently evaluated timber sales on state lands across 15 lakes in northern Wisconsin. In some cases, they counted every single tree in the buffer zone along lakeshores where timber was harvested. They claim the DNR violated their own standards on 9 out of 15 lakes by authorizing timber harvests too close to the lakeshore, saying those lakes likely represent the tip of the iceberg.

They believe a change by lawmakers in recent years has led to more aggressive harvesting. Republican lawmakers directed the agency to classify 75 percent of northern state forests as forest production areas when they passed the two-year state budget in 2015.

"I think that was a real message to the DNR that said you had better really start cutting even heavier than you have in the past," said Schwarzmann. 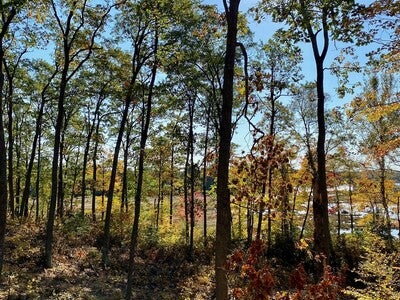 A view of trees near Whitney Lake in Vilas County after harvest. Photo courtesy of the Wisconsin DNR

But the DNR’s Shockley rejected that notion. He said the change didn’t correlate to more timber harvests on the Northern Highland-American Legion State Forest.

"Our annual allowable timber harvests have been going down since about 2010, and there's lots of factors that affect that," said Shockley. "It's not always legislation. It's our timber types. It's what's growing and where and how quickly it's growing."

Shockley added around 30,000 acres in the 230,000-acre state forest is being passively managed and will never be harvested.

As ASI launches its investigation, Berghoff and Schwarzmann have asked the accreditation body to sanction the DNR’s auditor SCS Global Services, hire an independent auditor, and require the agency to halt all discussions about revising the DNR’s best management practices. SCS Global Services declined to comment.

The DNR’s Hardin said the agency is still implementing its standards to ensure water quality is protected at sites where logging is conducted near lakeshores. She said discussions are underway about revising those standards, which were last updated in 2011. It’s uncertain whether those revisions would take place this year.

"The state does take it very seriously, the responsibility we have to manage these properties," said Hardin. "We recognize how important they are."

As for Berghoff, she hopes ASI staff will visit sites this summer and draw their own conclusions.

"The longer this goes on, the more lakeshore habitat is being cut," said Berghoff.