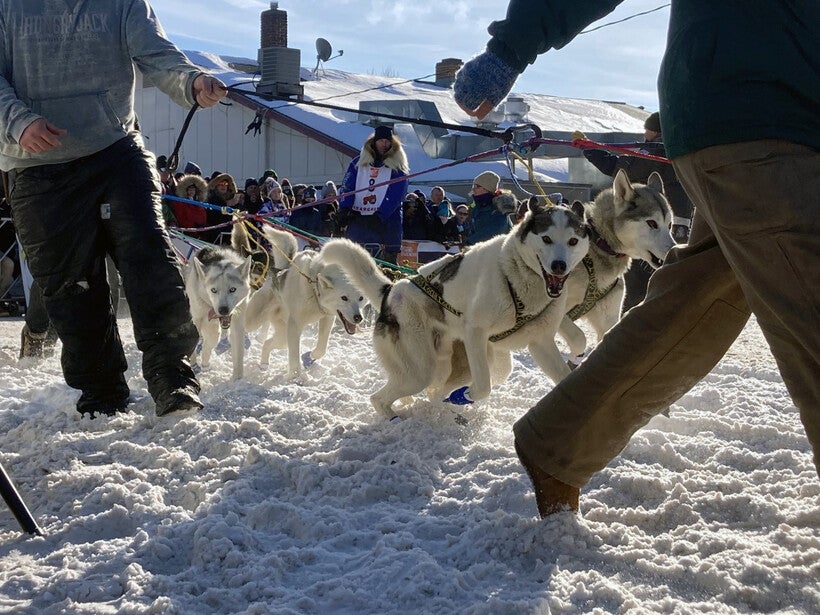 Blake Freking of Finland, Minnesota, a two-time champion of the John Beargrease Sled Dog Marathon, heads to the starting line with his sled dog team on Sunday, Jan. 30, 2022. Danielle Kaeding/WPR

After edging out a win by seconds last year, Moquah musher Erin Letzring returned to the John Beargrease Sled Dog Marathon on Sunday with hopes of reclaiming a first-place finish. 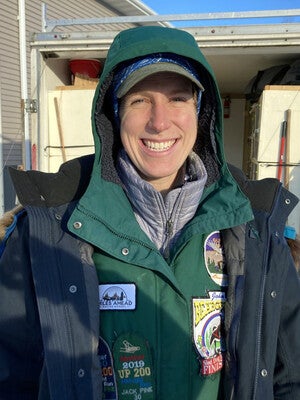 "We're going to go out and do the best we can," said Letzring before the race. "If you've won before, you're going to show up and try to do it again. So, you just have to have fun, just run the dogs you have in front of you, and enjoy your time out there."

Letzring, who grew up in the Duluth area, now splits her time training at her home in Moquah, just outside Ashland and Ray, Minnesota, along with her partner and champion musher Keith Aili.

Letzring finished the race last year in 32 hours, 43 minutes and 35 seconds. The contest is the longest race in the Lower 48 states and a qualifier for the Iditarod, which runs roughly 1,000 miles from Anchorage to Nome, Alaska.

Redington, an Alaskan native who trains in northern Wisconsin, is hoping to come out on top this year, but he said he doesn't have any big rivalries with Letzring or any other racers.

"I'm just hoping all the dogs are good, and we just have a good race this year," he said. 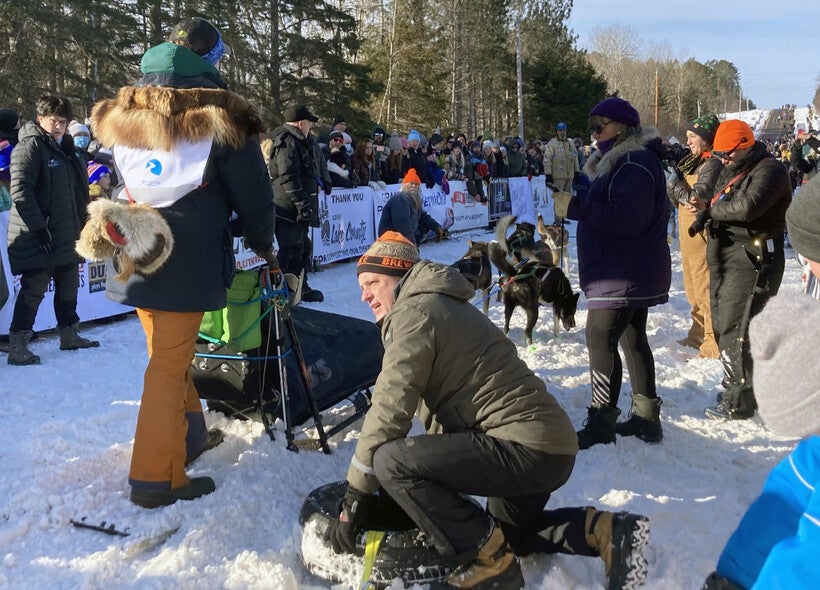 Erin Letzring, of Moquah, won the John Beargrease Sled Dog Marathon in 2021 by just 7 seconds. She returned to defend her title on Sunday, Jan. 30, 2022. Danielle Kaeding/WPR

Redington is racing the Beargrease without two of his sled dogs after a hit-and-run snowmobile collision in Bayfield County earlier this month. Redington said his wheel dog Wildfire is healing up well after surgery on his legs, which were broken in the incident.

"It's going to be a long process of healing, but he's on the right path," said Redington.

"It's the biggest race down here, and the most popular," said Marrs. "So, I had to try it." 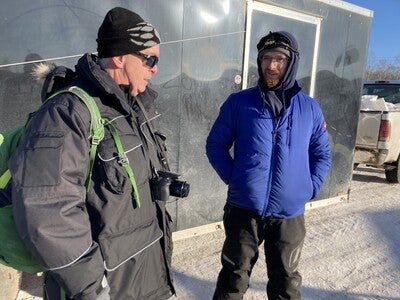 Marrs moved to northern Wisconsin last fall with his son Mack and wife Sophie, who hails from a small town south of Green Bay.

"Alaska is pretty expensive to have a dog team, much less two teams," said Sophie. "We figured if we could be closer to family, (and it's) cheaper and still mush by being North, you know, why not?"

While this is his first time racing the Beargrease, Marrs finished fourth last year in the Iditarod. Redington and Marrs currently keep their dogs on the same property near Brule.

Redington, who is grandson of Iditarod founder Joe Redington, finished seventh in the Iditarod last year. He said his ultimate goal is to win on the 50th anniversary of the race that his grandfather started.

"First place gets a 90-pound bronze statue of my grandpa, and nobody from my family has ever won it," said Redington. "That's the big goal." 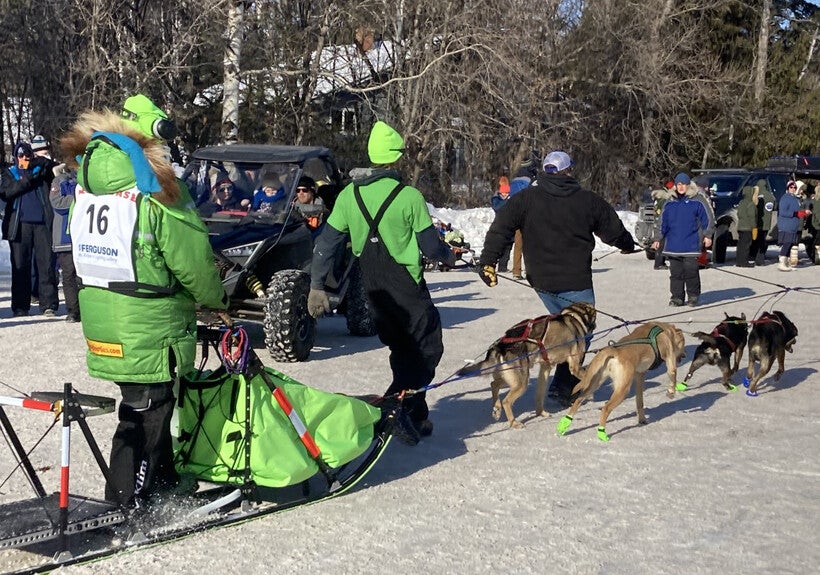 Ryan Redington heads toward the starting line of the 38th annual John Beargrease Sled Dog Marathon on Sunday, Jan. 30, 2022. Redington is racing without two of his dogs that were injured in a hit-and-run snowmobile collision in Bayfield County earlier this month. Danielle Kaeding/WPR

The 38th annual Beargrease marked the return of spectators after they weren't allowed last year due to the COVID-19 pandemic.

"It's awesome having spectators back. It adds excitement and adds a little bit of extra work for us, but it's great to see everyone interacting with the mushers and learning about our sport," said Beargrease spokesperson Monica Hendrickson.

The race’s two dozen mushers have teams of eight to 12 dogs that undergo a veterinary check before the race, and mushers are required to rest for 24 hours during the sled dog marathon. Race vets can prevent a dog or team from leaving checkpoints to protect the animals’ wellbeing, which is a top priority for mushers and race organizers. 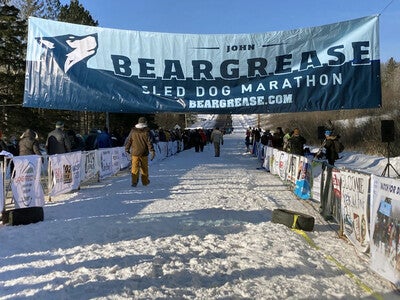 Spectators gather along the starting line of the John Beargrease Sled Dog Marathon just outside Duluth on Sunday, Jan. 30, 2022. The race marks the return of spectators after they weren't allowed last year due to COVID-19 safety precautions. Danielle Kaeding/WPR

Mushers prepare to face all trail conditions whether it’s cold, snow, rain or bare ground. Warmer weather last year slowed mushers. The weather could pose a challenge for teams again this year as the forecast calls for a high near 30 degrees on Monday.

"We like it a little bit colder, but it sounds like it's going to be a little warmer, so we'll deal with it," said Marrs. "We've had a couple pretty big cold snaps lately. So, they're not very used to this at the moment, but I think they'll snap back pretty quick."

The marathon is named after Anishinabe man John Beargrease who delivered mail with his brothers along Minnesota's North Shore during the late 1800s. According to race organizers, the fastest he ever made the trip with a team of four dogs was 28 hours from Two Harbors to Grand Marais. Mushers are still sworn in as official U.S. mail carriers each year.

"It's just fun," said Letzring. "It's a great challenge and a good adventure out there."