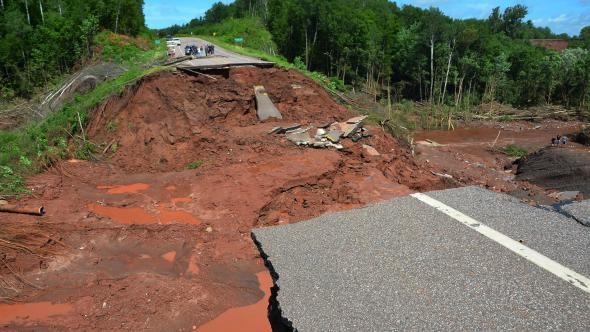 The Wisconsin Natural Resources Board met with state and local officials in Ashland on Tuesday ahead of Wednesday’s board meeting to get an update on flood damage and recovery from the July 11 storm.

The storm has racked up an estimated $35 million in damages to date. Stream flows on the White River near Ashland jumped to more than 25 times the normal rate in a matter of five hours, said John Gozdzialski, state Department of Natural Resources secretary's director for northern Wisconsin.

"Quite frankly, we are very lucky we didn’t lose more dams," Gozdzialski said. "We only lost a private cranberry dam in Washburn County. ... I attribute that to the operation of the owners, (who) saw that we had the flood coming. They opened up those gates, tried to pass as much water as possible."

Gozdzialski said the Bad River peaked the day after the storm at just over 27 feet, the highest flood stage ever recorded. Flooding on the Bad River amounted to a "1,000 year flood event," he said.

Iron County forest administrator Eric Peterson informed officials that the county is working with the Wisconsin Department of Transportation to put in a temporary bridge to restore access across Oronto Creek after flooding devastated Saxon Harbor. One business has been completely cut off as a result of the flood damage there. Peterson said rebuilding the harbor, marina and campground may cost up to $20 million.

"Iron County would be looking at $2.5 million out of pocket potentially, so our county board’s going to have to make a decision on what they feel they can afford," Peterson said. "Iron County’s only got 5,800 residents. We’re not a very wealthy county."

Seventy vessels were moored in the harbor when the storm hit. The storm sank six boats and sent many more floating out into Lake Superior. A spokeswoman for the U.S. Coast Guard said only one boat and two cars remain unaccounted for.

Gozdzialski said they expect Gov. Scott Walker to send damage assessments for a federal disaster declaration next week. In the meantime, local and state transportation officials are continuing work to restore bridges, culverts and roads in the region, including U.S. Highway 63 in Bayfield County.

"Within a month, we’ll have that section of highway open," Gozdzialski said.

Transportation officials will put in bridges on State Highway 13 to repair washouts to the road in Ashland County. The cost to install bridges there is estimated at around $2 million and $4 million, Gozdzialski said.

Maj. Joe Davison with the Wisconsin Army National Guard said debris removal is ongoing this week in northern Wisconsin after a wind storm downed trees a couple weeks ago. The Guard is continuing to assist local officials with road repairs.