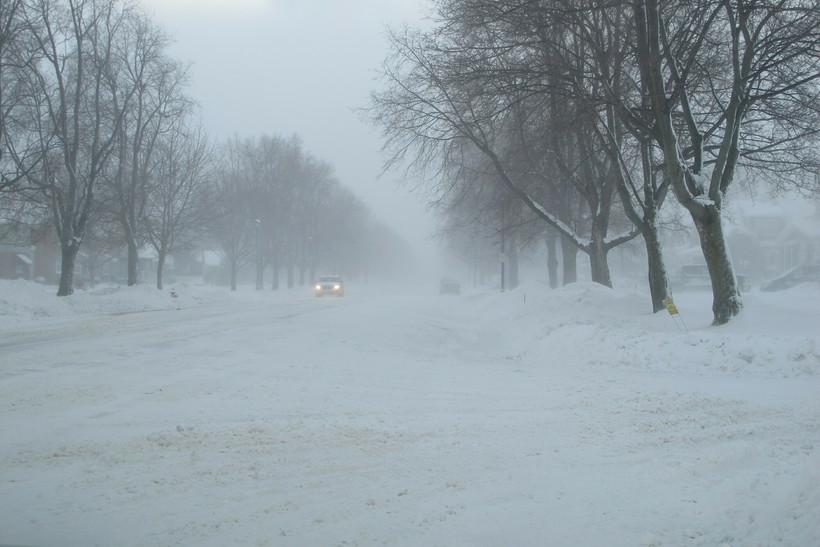 Southern part of the state to see sleet and freezing rain
By Diane Bezucha
Share:

After an unseasonably warm day Sunday, Wisconsin is already in the throes of its next winter storm.

The National Weather Service has issued a winter storm warning for northwestern Wisconsin, where residents could see 10 to 18 inches of snow over Monday and Tuesday.

As of Monday morning, weather service meteorologist Ketzel Levens said most counties had already gotten 1 to 3 inches of snow and some parts of far northern Wisconsin had already received 5 to 7.5 inches — and she expects it to keep falling.

"It's going to be a fairly long-duration winter storm event," Levens said. "We are expecting snow to continue all the way through late Tuesday night, even into early Wednesday morning for some of the areas along the south shore of Lake Superior."

With the lake effect bringing additional snow, Levens said Douglas, Bayfield, Ashland and Iron counties could see as much as 20 inches or more over the course of the storm.

Other counties in northern Wisconsin should expect around 8 to 12 inches of snowfall, while parts of central Wisconsin will see closer to 3 to 6 inches.

We've gotten reports of 5.0"-7.5" near Washburn, WI so far this morning, with higher amounts along the higher elevation near Cty C. A similar band has set up from Two Harbors to Gary New Duluth. #wiwx #mnwx https://t.co/ldCrKErNnl

But the southern part of the state is not exactly in the clear. The National Weather Service has issued winter weather advisories for most of southern Wisconsin, where a mix of sleet and freezing rain is predicted to start late Monday and continue through Tuesday.

"It's gonna be a bit of a mess here across the southern part of the state," Andy Boxell, a meteorologist with the weather service in Sullivan, said. "It's going to be very showery in nature. So probably multiple waves of freezing rain and sleet showers moving through."

He said we could even see some winter thunderstorms near Janesville, Kenosha and Racine.

Whether you’re contending with icy roads in southern Wisconsin or reduced visibility in the north, both Boxell and Levens said the storms will make driving treacherous and cautioned people to avoid travel if possible.

"We are expecting pretty gusty northerly winds throughout the entirety of this event," Levens said. "So even if there isn't a lot of snow actively falling out of the sky, there is a distinct risk for blowing snow and near-whiteout conditions, especially along Lake Superior where those winds will be the highest."

And road conditions can change quickly. Sudden snow and wind gusts Friday caused a 39-car pileup on Highway 51 near Wausau. The accident took four hours to clear and sent 10 individuals to the hospital with nonlife-threatening injuries.

At this point, experts say the storm does not present a strong risk for widespread power outages — something that is more common when heavy snowfall is accompanied by high winds.

Still, Xcel Energy spokesperson Chris Ouellette said the company is monitoring conditions and prepared to respond to outages across their service areas. She added that localized outages can happen, and she encouraged customers to report them promptly.

"A lot of times customers think, 'Well, the power company just knows my power's out.' Well, we don’t," Ouellette said.

The storm comes on the 100-year anniversary of one of the worst ice storms in Wisconsin's history. In 1922, from Feb. 21-23, freezing rain coated the southern part of the state in anywhere from 1 to 4  inches of ice, causing $10 million in property damage.