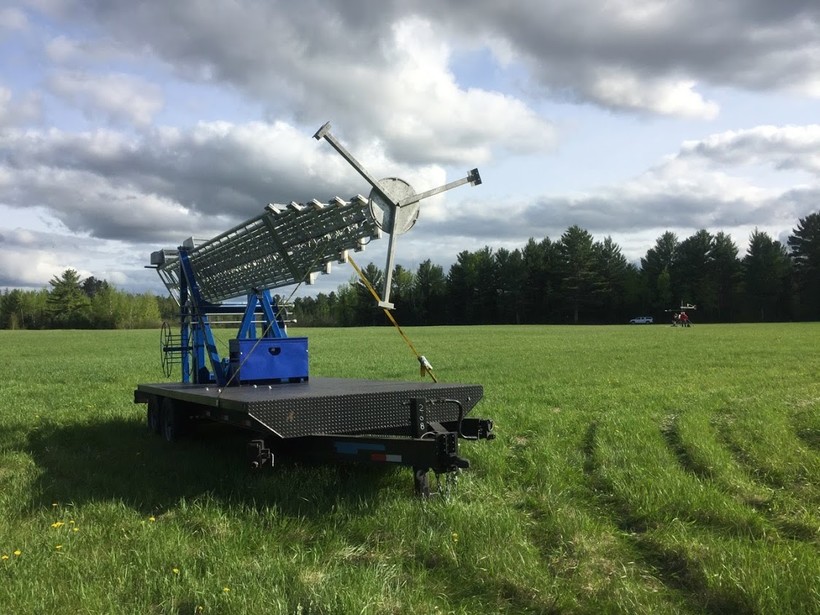 One of the 19 towers that's being used to collect data as part of the CHEESEHEAD study. The study aims to provide a better understanding of how the Earth's surface affects the atmosphere and vice versa.
Photo courtesy of Ankur Desai

Anyone looking skyward near Park Falls in far northern Wisconsin recently may have noticed a mix of drones, other aircraft and towers popping up — not to mention the 10-ton laser.

Scientists are examining a 6-mile radius just east of the small city of roughly 2,200 as part of a University of Wisconsin-Madison-led project that seeks to provide a better understanding of how vegetation and the Earth’s surface affect the atmosphere and vice versa. The study is known as CHEESEHEAD — Chequamegon Heterogeneous Ecosystem Energy-balance Study Enabled by a High-density Extensive Array of Detectors.

Lead investigator Ankur Desai, a professor in the Department of Atmospheric & Oceanic Sciences at UW-Madison, said they’re measuring things like how water and carbon interact across a variety of landscapes like forests and wetlands. They want to better understand the relationship between the atmosphere and varying landscapes.

"There’s a lot to be understood of how much does having different landscapes next to each other on a relatively small scale influence things like cloud development or where you get hot spots and cold spots on the landscape that lead to places where precipitation gets stronger or weaker," said Desai.

One goal, Desai said, is to understand whether forecast and climate models could be made more accurate by incorporating those landscape changes as part of predictions. He said the project is a roughly $4 million undertaking that’s being funded primarily by the National Science Foundation. Multiple partners including local schools, the University of Wyoming and National Center for Atmospheric Research will collect measurements from the air and on the ground this summer.

The study includes 19 sites with 30- to 110-foot towers that have a variety of sensors that use lasers or radar to measure the atmosphere. The towers surround the 1,500-foot WLEF-TV tower that is operated by the Wisconsin Educational Communications Board.

"Since about the late 1990s, several teams including my own have been making measurements on the tower primarily to understand greenhouse gases that influence climate in our atmosphere," Desai said. A 10-ton laser also recently arrived from Germany. Desai said researchers from the German national science foundation, Deutsche Forschungsgemeinschaft (DFG), will use it to collect data on water vapor in the atmosphere.

In addition, students from nearby Butternut Middle School will take part in collecting soil and water data.

Laurie Fox, a science teacher at the middle school, will be taking a few students to a handful of sites to help collect samples for the project.

"We will be doing some testing like we will gather the pH of the soil, the temperature, the density and the characterization of the soil," Fox said.

The project is also incorporating aircraft-based measurements of water and carbon exchanges with help from the University of Wyoming. UW-Madison is also planning flights to conduct what’s called hyperspectral remote sensing. The technology allows researchers to map the chemical characteristics and physiology of vegetation, said Phil Townsend, forest and wildlife ecology professor at the university.

Townsend said the university’s HySpex imaging spectrometer enables them to measure wavelengths of light both seen and unseen. He said wavelengths of light invisible to the naked eye allow them to get a look at things like nitrogen in foliage, which is necessary for plants to be able to take up carbon dioxide.

"We’re interested in looking at vegetation uptake of carbon dioxide in the atmosphere. That’s what drives life on our planet," Townsend said. "Vegetation takes up carbon dioxide and it respires oxygen, which is how we’ve gotten oxygen in our atmosphere."

He said if they can map the different traits of the plant, they can make predictions about what the plant is doing. For example, nitrogen measurements offer a good indicator of how much carbon dioxide is taken up by plants. Townsend added it also gives scientists an indicator of the health of an ecosystem and how it’s responding to climate change or weather extremes. 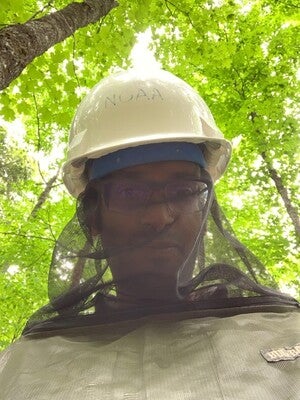 Ankur Desai, a professor with UW-Madison, is the lead principal investigator on the CHEESEHEAD study.
Photo courtesy of Ankur Desai

"We may be able to learn a lot of stuff like which of these ecosystems are most sensitive to different climatic variables," Townsend said.

In wet years, he said, plants may grow more and take up more carbon if there are no pest or disease stressors on the them. During times of drought, vegetation might develop thicker leaves to retain water and grow less. With climate change, Townsend said, the increased frequency of wet weather and drought can cause stress on the plants.

Townsend said it’s important to understand how different ecosystems may respond. Desai agrees the study will provide data that benefits short-term forecasting, as well as the role vegetation may have on projecting future changes to climate.

Desai said the information may add to scientists’ understanding and play a role in helping decision makers to craft policies to more effectively target reductions in emissions. Researchers will be collecting data at the sites from now through early October.