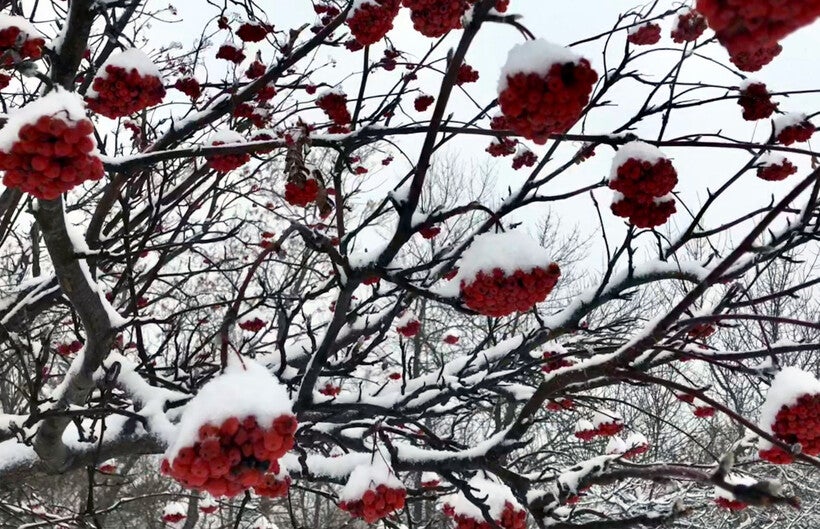 Snow fell overnight Wednesday, Dec. 26 into Thursday, Dec. 27, 2018 in the Twin Ports. A storm system from the southern U.S. is making its way through the Upper Midwest, and could dump up to 15 inches of snow across northern Minnesota and Wisconsin. Danielle Kaeding/WPR

Up To 10 Inches Reported So Far With More Snow On The Way
By Danielle Kaeding
Share:

Northern Minnesota and northern Wisconsin have already received anywhere from one to 10 inches of snow as part of a widespread winter storm in the Upper Midwest.

Northern Minnesota has seen the highest snowfall amounts with 10 inches recorded in Silver Bay early Thursday morning and 8 inches reported in Finland. The Twin Ports has received around 4 to 6 inches of snow with greater amounts in higher elevations away from Lake Superior.

In northern Wisconsin, Bayfield reported 3.8 inches near Raspberry Bay and the Les Voigt State Fish Hatchery. Ashland, Maple, Poplar and Hayward have recorded around 2 to 2.5 inches of snow. Around 4 to 6 inches of snow has been reported across the Twin Ports as of early Thursday. Danielle Kaeding/WPR

Other areas like Madeline Island, Phillips and Rice Lake are getting rain, said Steve Gohde, observing program leader for the National Weather Service office in Duluth.

He said northern Wisconsin is expected to see an additional 3 to 5 inches of snow through Thursday and into Friday.

"The trouble is going to be picking off where that rain/snow line is here and when things transition back over," he said. "But, (we) definitely expect for the northern tier counties there among the snow belt — Bayfield and Ashland and Douglas counties — that will, nearer the lake, probably transition back to snow later this evening with those colder temperatures dropping in."

People in the region can expect strong northerly winds of up to 30 mph and temperatures falling to 10 degrees Friday. Gohde said temperatures are expected to bottom out Saturday.

"It’ll feel like temperatures (of) at least 10 below for Saturday morning," he said. "Anything that was wet is going to be like flash freezing."

"I wouldn’t think this is anything too far out of the ordinary as far as travel hazards when it comes to Minnesota and Wisconsin winters. But, with the temperatures dropping off, people have to be smart about their travel," he said.

Gohde said drivers should slow down and plan for slower traffic. A winter storm warning remains in effect for northern Minnesota and Wisconsin until noon Friday.