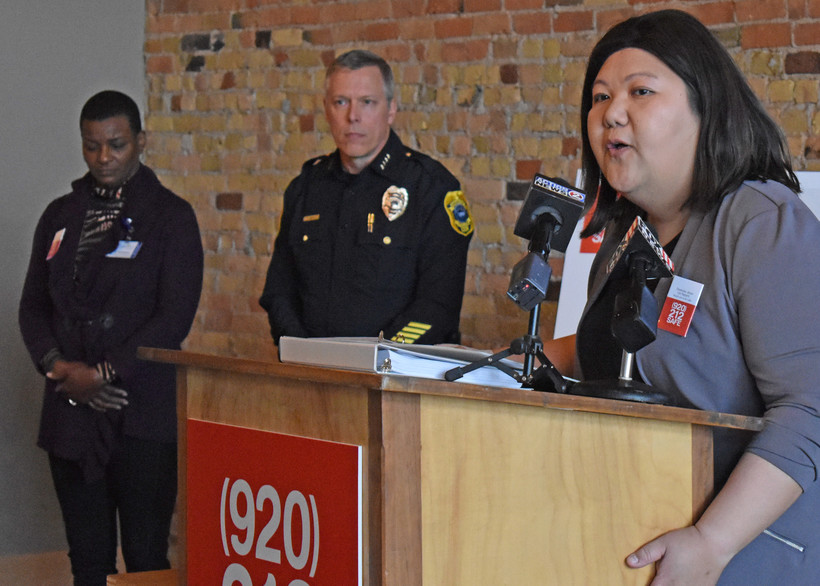 One Northeast Wisconsin community is coming together to combat a rise in domestic violence.

Community partners in Brown County launched the "Be Safe" campaign Tuesday at the O’Connor Connective in De Pere. "Be Safe" is a marketing initiative to help victims connect with resources by calling 920-212-SAFE, or visiting 920212SAFE.com.

The campaign was unveiled during Domestic Violence Awareness Month and comes after Wisconsin saw record domestic violence deaths in 2020 and 2021. Domestic violence calls have remained high in 2022, according to Green Bay Police Chief Chris Davis.

Beyond the website and phone number, the campaign will include social media pages, digital billboards, posters, video and more. The "Be Safe" initiative is a combined effort between multiple organizations in the greater Green Bay area.

"There is power in partnerships," Green Bay Mayor Eric Genrich said in a statement. "For this campaign, nonprofit organizations, governmental agencies and local businesses are working together to raise awareness about the free, local help available for those affected by domestic violence."

"It can be verbal, emotional, financial, physical," she said. "It's the abuser's way of taking control over the victim."

When many victims leave their abuser, they’re worried about their children, their financial situation and even increased violence when their abuser realizes they left, Lo said.

"Many do not know where to turn. That’s why the 'Be Safe' campaign is so important," she said. "Raising awareness about the free, local, safe call code available will increase the number of victims who reach out."

Renita Robinson, vice president of diversity and inclusion at Prevea Health, said domestic violence can lead to negative health effects, as victimization is a "social determinant of health."

"Social determinants of health are the spaces that we live, and work, and get educated in," she said. "(They are) where we survive. If you're afraid in that space, it's really difficult to survive, certainly difficult to thrive."

"It's not your fault. You don't deserve this. There is help out there," she said. "Don't keep it within the family. Seek help."

While Golden House has been providing services to survivors of domestic violence for over 40 years, Lo said the need for services is not decreasing.

There were a record 80 domestic violence deaths in Wisconsin last year — breaking the record of 68 deaths recorded in 2020, according to a report from End Domestic Abuse Wisconsin.

In 2021, domestic abuse cost the state over $657 million total and $6,976 per incident, according to a study released earlier this month by the Sojourner Family Peace Center and The Jamie Kimble Foundation for Courage. The study said those costs came from loss of life, physical and mental health care, court costs, policing and prisons and lost productivity at work.

Additionally, one quarter of women around the world between ages 15 and 49 are estimated to have experienced physical abuse, sexual abuse or intimate partner violence in their lifetimes, according to a February study published in The Lancet.

Those findings are reflected at the local level. The Green Bay Police Department took 507 reports of domestic violence in 2021, or roughly two calls per day, according to Davis.

Compared to historical trends, 2022 hasn't been much better. Davis said his department continues to see "an unusually large" number of domestic abuse situations.

"When domestic abuse happens, it impacts not only survivors, but it impacts their families and, really, it impacts our whole community," Davis said. "Holding abusers accountable is our business, but that's really just one part of the solution to this problem. Providing resources for survivors is critical to addressing this issue in the long term."

Over the last decade, he said law enforcement agencies have been more proactive in connecting victims to resources through community partnerships.

"In the past, what would happen is police would come, they might make an arrest of an abuser and then leave," Davis said. "And the survivor is left there thinking, 'What do I do now? How do I get out of this situation?'"