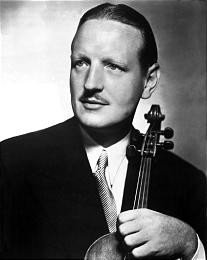 English violist William Primrose made a policy of never making excuses for his performances, no matter how difficult the circumstances surrounding them.

While he was a member of the prestigious London String Quartet, the ensemble was scheduled to perform at New York’s Town Hall. The program included works that had particularly hard viola parts–the B-flat Quartet by Brahms and the Debussy quartet.

Before the concert, Primrose stepped outside to relax. While taking in the fresh spring air, he decided that a cigarette would be just the thing, so he lit a match. But he neglected to close the cover, and the whole book of matches went up like a torch, giving his left hand a severe burn.

He hurried to a drugstore to kill the pain and got some medication that made the hand feel somewhat better, but the stuff was so sticky that when he played, the ball of his left thumb kept getting stuck to the viola. The process of getting his thumb stuck and unstuck was so noisy that Primrose could imagine everyone in the audience, back row critics included, squirming at the sound of it.

The friction against a burn between his first and second fingers caused him considerable suffering every time he played a half step.

Nonetheless, at the post-concert reception, he received nothing but praise and congratulations for his execution of the difficult viola parts.

But cellist Warwick Evans took him to task for being rude, especially while talking to the ladies at the reception. “You’ve had your left hand stuck in your pocket all evening,” he said.

Primrose reminded him about the burn and explained that he wasn’t trying to hide it for appearance’s sake, but because he didn’t want people to think of it as an excuse and deduce that the performance wasn’t as good as it might have been under better circumstances.

Primrose tells the story in his 1978 memoir Walk on the North Side.