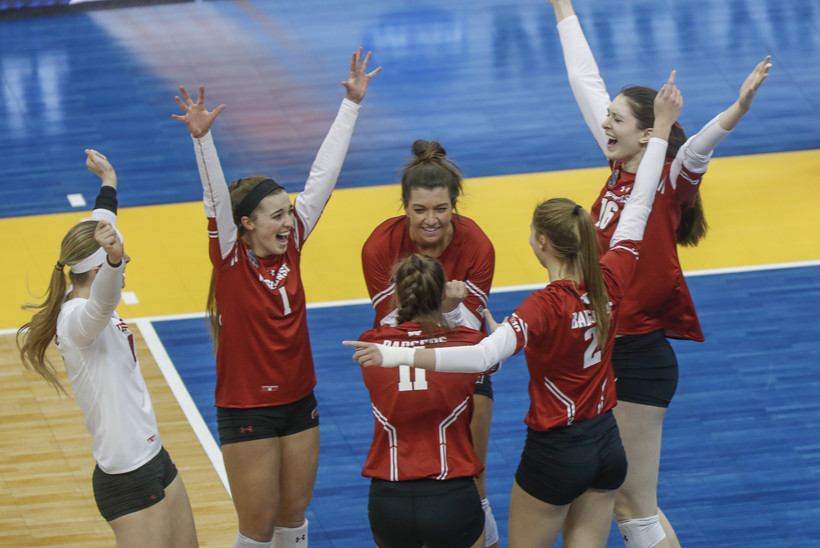 The Wisconsin team celebrates after defeating Baylor in a semifinal of the NCAA Division I women's volleyball championships, Thursday Dec. 19, 2019, in Pittsburgh. Keith Srakocic/AP Photo

The Wisconsin Badgers are set to open the women’s volleyball season Friday against Purdue as the top-ranked team in the country.

Last year, the Badgers were runners-up for the national title, losing to Stanford. But this season, senior middle blocker Dana Rettke said she thinks the team has what it takes to go all the way.

"We just have so much depth, and especially with a year like this, that is super important," she said, noting positive COVID-19 tests can come at any time.

When it comes to playing during the pandemic, the biggest change may be the absence of fans, Rettke said. The Badgers are accustomed to selling out the Wisconsin Field House. But in the gym, the team’s energy levels have been as high as ever, she said.

For his part, head coach Kelly Sheffield said it’ll be different playing without spectators. But at this point, most college volleyball coaches would be up for playing on the moon if it meant the season could get underway, he said.

Rettke did the math this week and found Wisconsin’s upcoming season opener will take place one year, one month and one day after the team last played in the NCAA volleyball tournament, she said. The Big Ten didn’t participate in a fall season, where No. 2 Texas stood out. Rettke said the Badgers tried to stay positive despite the uncertainty of whether they'd play.

"I think we all kind of decided to take the approach of being as optimistic as possible and just tackling whatever is in front of us," she said. "If we had to wait another year, OK, let’s get better this offseason. If the season was going to start tomorrow, OK, let’s get after it and be ready."

Opening the season as the nation’s top ranked team puts pressure on the Badgers to keep their standards high, said senior setter Sydney Hilley. Wisconsin has never won a national title in the sport — in fact only 10 programs have earned the honor. But Hilley said she hasn’t lost the motivation she felt after last year’s loss in the national championship.

"I’m just so excited that the opportunity has finally come, that it’s a match week. It just doesn’t feel real," she said.

From March to May, players couldn’t even get in the gym, Rettke said. Rettke did body weight and dumbbell exercises, and she ran sprints on the street, she said. But she also used the time off to recover from a busy 2019 — she was named the Big Ten’s Female Athlete of the Year, and she helped the U.S. Women’s National Volleyball Team qualify for a spot at the Tokyo Olympics.

"I think there’s a lot of positives to take out of that (time off). I think a lot of us did a lot of personal growing and reflection that was really much needed," she said.

Players have found ways to build chemistry without getting too close, Hilley said. They’ve donned masks and sat 6 feet apart in the Field House for chats, and they’ve moved a lot of team bonding activities online, she said. During the break, players started a documentary club, watching the film "Becoming" about Michelle Obama and the series "The Last Dance" about Michael Jordan and others. Players also volunteered as poll workers during the November election.

It’s been a challenging year for college athletics programs, which have dealt with countless canceled practices and postponed games amid the pandemic. But currently, the Badgers are also ranked No. 1 in women’s hockey and No. 10 in men’s basketball.