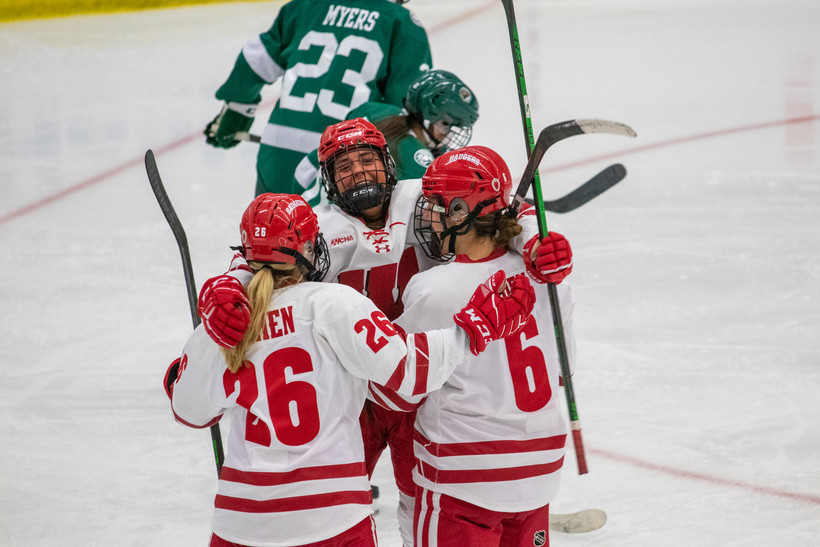 No. 1 Badgers Look To Springboard Into Women's Hockey Playoffs

While Hockey Season Wraps Up, No. 1 Wisconsin And No. 4 Nebraska Postpone Volleyball Series
By Megan Hart
Share:

The University of Wisconsin-Madison’s top-ranked women’s hockey team will close out its regular season this weekend with games against the University of Minnesota Duluth on Friday and Saturday.

The Badgers are 11-2-1 after missing the full month of December due to injuries and coronavirus concerns. Wisconsin will play for the conference title next weekend, before the NCAA tournament starts March 15 in Erie, Pennsylvania.

"I think it’s going to be a fun weekend for a lot of different reasons," head coach Mark Johnson said, citing the magnitude of each game.

During a normal season, Johnson noted, the Badgers would reach game 14 by mid-November. This season was delayed and shortened due to the coronavirus pandemic, so each game has carried more weight. Plus, a strong performance this weekend could help springboard the team into the playoffs, he said.

Though this season was different, the team’s attitude going into the postseason hasn’t changed, said senior forward Brette Pettet.

"We still have the same goals and the same mindset going into each game and each shift," she said. "I think that’s important at this point of the season, to make sure that we’re ready when they drop the puck coming into the first period."

Wisconsin is the reigning national champion after winning the title in 2019. The postseason was canceled last year due to the pandemic. Freshman forward Makenna Webster said the older players have passed down Wisconsin’s winning culture.

"I think every one of the freshmen look up to them, and we want to (win), not just for the team but for the captains who will be leaving us," she said.

Two Badgers players have been named Top 10 finalists for the 2021 Patty Kazmaier Memorial Award, the Heisman Trophy of women’s hockey.

Senior forward Daryl Watts won the award in 2018 — the year after Badgers star Ann-Renee Desbiens — while playing for Boston College. She transferred to Wisconsin the following season and now leads the conference in plus-minus and points per game. Her teammate, junior forward Sophie Shirley, is also a finalist. Shirley ranks third in the conference for goals, assists and points.

Watts and Shirley were also finalists last year, along with their teammate Abby Roque, who graduated prior to this season.

In men's hockey, the Badgers are ranked No. 5. Their regular season wraps up March 6.

Meanwhile, Wisconsin’s volleyball team — also ranked No. 1 — was set for a big matchup this weekend against the No. 4 Nebraska Cornhuskers. The games were planned for Friday and Saturday and marked the first time this season the Badgers would take on a top 10 opponent.

But they’ve been postponed due to safety concerns, and the Badgers have paused team activities for two weeks due to positive COVID-19 tests within the program, according to a news release from UW Athletics.

"We are disappointed for our players and fans that we won’t be able to play this weekend but the health and safety of all of the players is what’s most important," Badgers head coach Kelly Sheffield said in the statement.