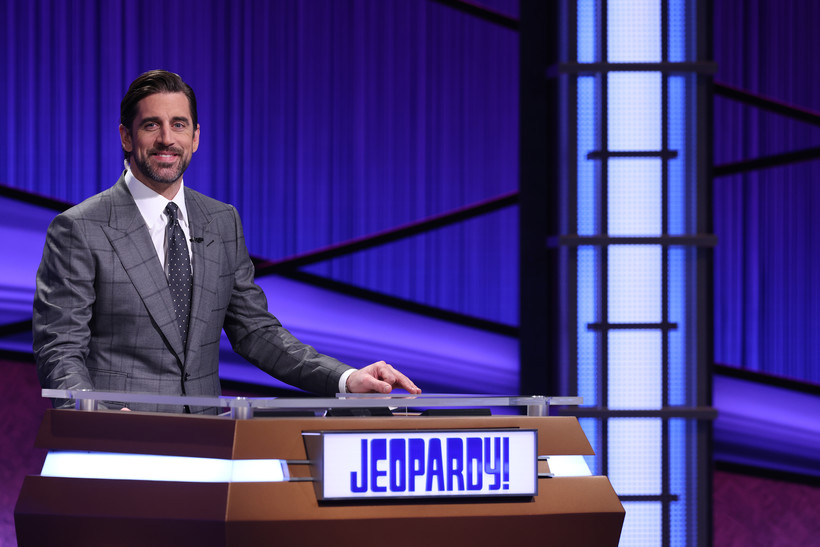 This NFL Quarterback Would Love To Become The Permanent Host Of 'Jeopardy!'

His two-week stint wraps up Friday, and it’s already led to some viral moments, including a "pretty, pretty good" impression of Larry David and a couple of Packers-related jokes.

On his very first day, a contestant used the Final Jeopardy question to rib the reigning NFL MVP. Returning champion Scott Shewfelt trolled Rodgers, writing, "Who wanted to kick that field goal?" — a reference to a controversial decision made by Green Bay late in this year’s NFC title game, which the Packers lost to the Tampa Bay Buccaneers.

Someone had to ask, right @AaronRodgers12? pic.twitter.com/UJ9Lt4Y5cM

"That is a great question," Rodgers said. "Should be correct, but unfortunately for this game today, that is incorrect."

A more innocent moment on this Tuesday’s episode left fans chuckling. From a sports category, Rodgers read the clue: "In the 1960s, these Midwesterners earned five NFL championship trophies." It’s the Packers, of course, but no contestant ventured a guess.

After a defeated shrug from Rodgers, which garnered some laughs from the contestants, they stuck with the category. In response to the next clue, pastor Erick Loh buzzed in with the answer: the Boston Celtics.

"Oh, you know that one, huh?" Rodgers joked.

I. Love. This. Game. Every night is something new and different ❤️💯 #grateful # https://t.co/8ybJEr01pn

Rodgers is one of several celebrity guests taking up the mantle after the death of longtime "Jeopardy!" host Alex Trebek. Journalists Katie Couric and Anderson Cooper, as well as actor and scientist Mayim Bialik, are among those who have assumed hosting duties. During his time as guest host, Rodgers has been raising money for the North Valley Community Foundation to help support his hometown amid the coronavirus pandemic.

It’s no surprise Rodgers is a "Jeopardy!" fan. He appeared in a celebrity tournament in 2015, beating astronaut Mark Kelly and entrepreneur Kevin O'Leary, to win $50,000 for Midwest Athletes Against Childhood Cancer.

Hosting the show was more difficult that he expected, Rodgers told USA Today. But if the producers wanted him to take over permanently, he’d be up for it, he said.

"Hell yeah, I would. Look, it’s my second-brain job," he told USA Today. "I love the show and have a deep, deep affection for it. Not only is it a nostalgic connection to my childhood, but it’s a really special show to me and I had a great time with everybody that works there."

Rodgers has made headlines this offseason, not only for hosting the legendary quiz show, but also for announcing his engagement to Hollywood star Shailene Woodley.

The couple recently visited Disney World, where they filmed a video for Walt Disney World News. It was full of cute moments as they discussed their love for "Star Wars" and Disney songs.

The Packers fell just one game short of the Super Bowl again this year. There’s been speculation over Rodgers' future in Green Bay this offseason, and not only because of his comments about taking on a bigger role at "Jeopardy!"

Scrambling to get under the salary cap, Packers management restructured several contracts this offseason. But reports indicate the quarterback’s wasn’t among them. The move would have assured his next several years in Green Bay.