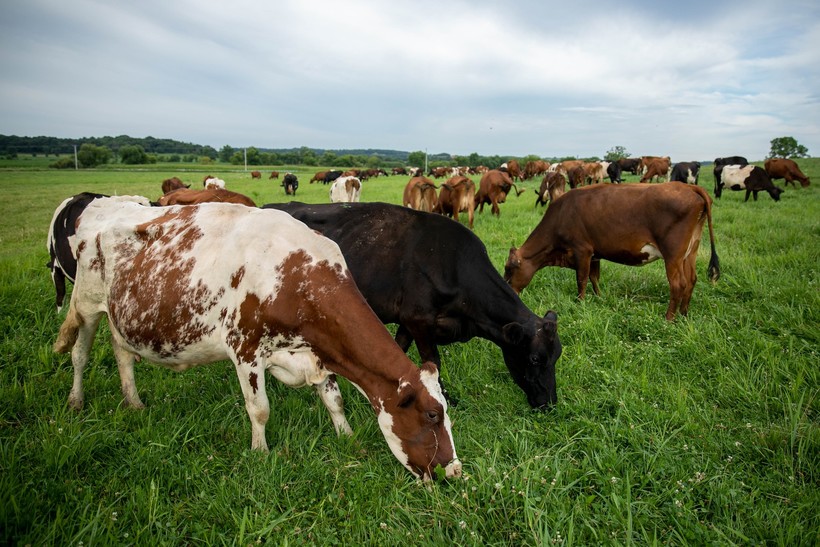 Dairy cows graze at the Paris Farm in Belleville, Wisconsin in 2018. Finn Ryan/University of Wisconsin-Madison

While managed grazing is praised for environmental benefits, Heifer Grazing Compass creators want to show it saves money and time, too
By Hope Kirwan
Share:

When Jim Munsch started learning more about using managed grazing for beef cattle in the 1980s, he went on pasture walks with farmers already using the practice and sought out information from local University of Wisconsin-Extension educators.

Managed grazing is the practice of rotating livestock through a series of paddocks and allowing the animals to eat perennial grasses instead of keeping them confined to feedlots.

Munsch said when people discuss the benefits of managed grazing, they often talk about rewards that are hard to quantify.

"The animals are healthier, there's less labor involved. We're taking advantage of a good resource that we have in Wisconsin and that is the ability to raise a lot of grass, and we can use marginal land," he said. "Those are all sorts of subjective things, but the real nut is that by using managed grazing ... you dramatically increase the amount of forage that you can produce from pasture and the cost is extremely low."

Munsch has been preaching the economic benefits of managed grazing for years, sharing the cost breakdown from his own farm in Coon Valley. But with the help of a UW-Madison initiative, that data has been turned into a tool that farm service professionals and dairy producers can use to look at the cost breakdown of switching a farm's animals from a confinement system to managed grazing.

The Heifer Grazing Compass looks at the operating costs of grazing, how much land is needed to support a herd and how adopting a grazing system financially compares in the long term to a farm’s current strategy.

John Hendrickson, farm viability specialist for UW-Madison’s Center for Integrated Agricultural Systems, helped develop the tool for the Grassland 2.0 project. Started in 2020 using a $10 million grant from the U.S. Department of Agriculture, the collaboration between researchers from UW-Madison and other universities, farmers and agriculture industry leaders is working to encourage farmers to adopt the use of grasslands.

"We want farms to be financially viable and sustainable for the long term," he said. "But of course the Grasslands 2.0 project also has this larger look at the entire landscape and climate change and soil erosion and what can we do to have a more sustainable agricultural system on the landscape."

Hendrickson said perennial crops have been shown to help hold soil in place and sequester carbon into the land.

But even with the scientific evidence, Munsch said it can feel like a leap of faith for a farm to upend their way of operating.

"All that this tool does is creates a little more certainty about the economic consequences of doing this, and the animal performance consequences and the reduced labor that we have seen when we've looked at this on some farms," he said.

Munsch said these promised savings are crucial to dairy farmers when they’re bringing new heifers into their herd that aren’t yet producing milk. He said farms have always strived to care for these animals as cheaply as possible and the Grazing Compass can show them which model is actually the most cost-effective for their farm.

He said grazing also presents an opportunity for producers who aren’t interested in milking cows.

"They don't want to have cattle on their farm in the winter, and so they hire themselves out as a contract grazer to someone who does have dairy animals," Munsch said. "We have shown that the grazer can make money and the large dairy can save money in a setup like that."

Hendrickson said the tool will hopefully be adopted by farm service providers, like those at the federal Natural Resources Conservation Services, who can help farmers develop a detailed plan for getting started with grazing. He’s also working on other compass tools, including one for beef producers and another that can be used for other ruminant animals like sheep and goats.