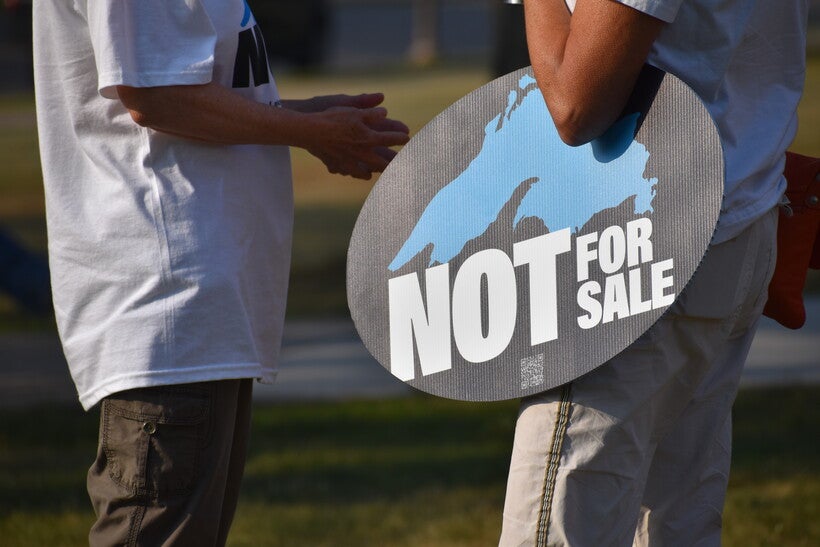 County's permit denial for Kristle KLR's proposal is under review in court
By Danielle Kaeding
Share:

A new report is recommending ways to protect an artesian aquifer in Bayfield County following a controversial proposal to bottle and sell water from an artesian well in a Lake Superior watershed that’s now being fought in court.

Residents and tourists have long been drawn to the region’s artesian wells because they don’t require pumping. Water naturally flows to the surface under its own pressure.

The paper released by the Mary Griggs Burke Center for Freshwater Innovation at Northland College in Ashland lists four recommendations for Bayfield County, which is facing litigation in Barron County Circuit Court over its denial of a special land use permit for Duluth-based water startup Kristle KLR.

Kristle Majchrzak, the company’s founder, seeks to capture and sell water from an artesian well on property she and her father own in the Town of Clover. The water would be transported to Superior to be bottled and sold.

Kristle KLR’s proposal has highlighted implications for water management of the state’s artesian water resources. Peter Annin, the center’s director, said the report outlines artesian systems and springs statewide that have been depleted or disappeared in the face of development and overpumping.

"The residents of Bayfield County have really made it clear that they do not want to see anything like that happen in their area," Annin said. "In many ways, Bayfield County may represent one of the last intact, thriving artesian systems in the state."

A 2007 survey by the Wisconsin Wildlife Federation identified nearly 11,000 springs statewide and found as many as 1,000 have dried up.

The report notes artesian wells in Green Bay and Prairie du Chien once shot water around 60 or 100 feet in the air but are now a shadow of their former state or nonexistent. In Waukesha, tourists once flocked to the "Spring City" during the late-1800s. Now, the vast majority are gone, and the city has long struggled with radium contamination in its wells.

That’s not the case in Bayfield County or northern Wisconsin, said Ken Bradbury, director and state geologist for the Wisconsin Geological and Natural History Survey.

"That part of the state has more like the historic conditions that occurred over the rest of the state years ago, but we don't see anymore," Bradbury said. "That’s kind of a neat, almost a museum of how the groundwater system used to be in other places."

Bradbury noted too much drawdown of groundwater aquifers can make them more vulnerable to contamination because that can change the way water flows. In Madison, groundwater under parts of Lakes Monona and Mendota used to flow into them but now seeps downward to recharge the aquifer.

Kristle KLR’s proposal is very small compared to other withdrawals. The well that Majchrzak wishes to tap flows at a maximum rate of 7,200 gallons per day. That’s far below high-capacity wells that draw 100,000 gallons or more daily, which at times have dried up or reduced flows in rivers and streams in the Central Sands region.

Even so, the proposal has prompted pushback among county residents with more than 1,600 comments submitted to officials in the summer, urging them to deny a permit. Opponents fear it would threaten the region’s water resources, tribal treaty rights, and open the door for large corporations to extract water.

The proposal’s critics have also said the project exploits a loophole in the Great Lakes Compact — a landmark agreement that bars water diversions outside the Great Lakes basin. That allows water to be removed from the basin in containers of 5.7 gallons or less, giving local and state governments oversight of smaller withdrawals.

The Wisconsin Department of Natural Resources only regulates withdrawals from high-capacity wells. Yet, Majchrzak’s attorneys argue oversight of the project’s well lies with the state and not the county. The county’s attorneys contend they weren’t regulating the well but rather the county’s authority over land use.

"All the time, local jurisdictions make zoning decisions based on the desires and needs for their particular jurisdiction, so there's nothing that precludes them from doing that in this case," Ambs said.

The Bayfield County Board already voted in the fall to change its zoning ordinance to bar bottling plants. County officials have also applied for a $20,000 grant to begin mapping its artesian wells.

Ambs noted Minnesota regulates groundwater withdrawals at a lower level of 10,000 gallons per day. The state also has a groundwater plan that seeks to improve data and partnerships on groundwater, as well as assuring permitted withdrawals are sustainable.

A 2004 groundwater quantity law that expanded state authority to consider impacts from high-capacity wells was meant to be a first step in better regulating groundwater withdrawals, Ambs said. After nearly two decades, he said the state should "up its game" to determine next steps in terms of additional state regulations.