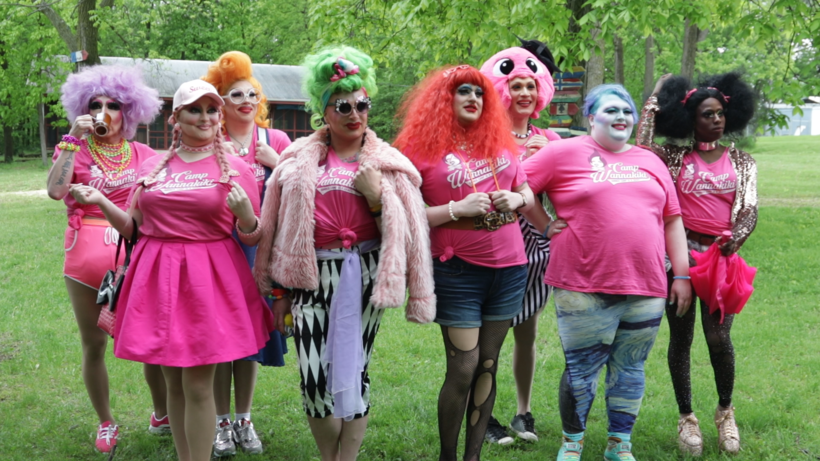 A new YouTube reality competition is bringing together drag queens from Wisconsin and Illinois to compete for a week at summer camp to win the crown "Queen of Camp."

"We're looking for the Queen of Camp, which is literally the queen of Camp Wannakiki ... but also camp queens," said Brandon Wright, one of the creators and producers of the show. "A campy queen is also known as a comedy queen in the drag world, you've got your glamour queens that are very glamorous and you’ve got your campy, silly funny queens."

Wright, who is producing the show with his brother, said they are both big fans of drag and wanted to showcase the campy side of drag, something he said doesn’t get very much attention.

"(Drag) is becoming more mainstream," he said. "But the positive and the negative with that becoming so mainstream is that that's only one side of the drag universe that's being put out there for the masses to see, and we just felt that campy comedy side wasn't really out there."

The season, beginning Tuesday, will include seven episodes. Each day has a theme which is carried through to a nighttime talent show, Wright said. The queens compete for the day’s badge, with the ultimate badge being the Queen of Camp for the camper who makes it to the end of the week.

"The queens were in ... their character a lot of times, but then ... once the challenge began they quickly, you kind of see them revert back to themselves," Wright said. "Before it was just my made up character reacting to doing a canoe race, but 'Oh jeez I'm actually in a canoe now racing against other drag queens in canoes,' so it's really funny to see that character development."

Some of the queens have camping experience, for others this is their first time at summer camp, Wright said. Those with camping experience might have a slight advantage, but the nightly talent show is an equalizer, he said.

The Wright brothers — who perform drag themselves as Apple Brown Betty and Cherry Pi, the Sugarbaker Twins — are also the camp directors.

"They have their own little comedic sort of role," he said. "They're not competing, but they frame the day and the challenges, and we're also assisted by another well-known Milwaukee drag queen, Dear Ruthie, and she is a camp counselor."

First and foremost, Wright wants the show to be entertaining, but he also hopes it opens people up to another art form.

"When you've created this character and you develop it, and also some of the skills and actually doing the makeup on the face is very artistic," he said. "So we think there's a lot for people to see and, you know, we know some people aren't going to like it, but we think the vast majority will."