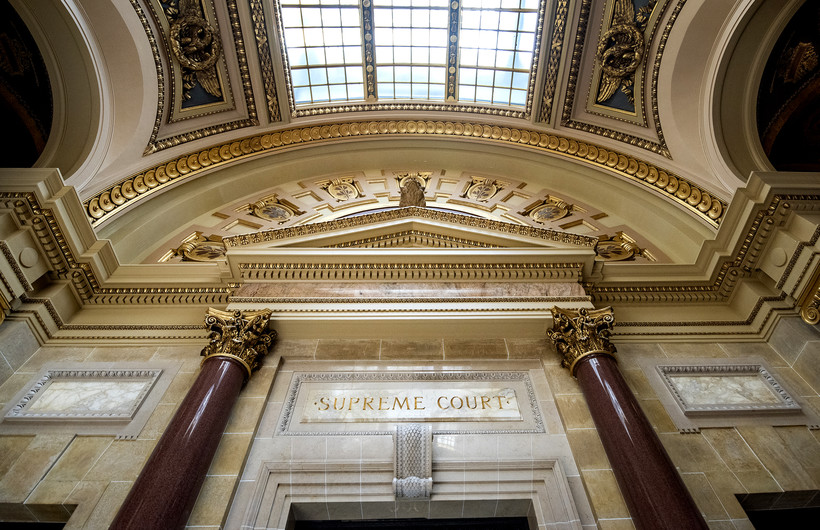 Two new lawsuits filed Monday asked courts to get involved in Wisconsin's next round of redistricting, including one by a conservative group telling Wisconsin Supreme Court Justices that they could potentially redraw the state's political lines themselves.

The cases were the second and third redistricting lawsuits filed since the process officially began earlier this month, setting the stage for a legal fight that could span several months and multiple courtrooms.

The latest lawsuits included one filed by the conservative Wisconsin Institute for Law and Liberty, telling justices that — if needed — they could redraw them map themselves with minimal changes to the district lines Republicans passed in 2011.

The move comes about 10 days after Democrats filed their own redistricting lawsuit in federal court asking judges there to draw the map. A coalition of groups that have worked with Democrats on redistricting, including Black Leaders Organizing for Communities, Voces de la Frontera and the League of Women Voters of Wisconsin filed their own lawsuit in the same federal court Monday, likewise telling judges that they might need to draw the map.

The once-a-decade battle over the legislative maps that will shape Wisconsin's politics until 2032 will almost certainly be decided in court this cycle because Democratic Gov. Tony Evers and the Republican-controlled Legislature are unlikely to agree to new maps on their own. That puts an intensified focus on which court will hear the case and how its judges might lean.

The filing Monday by the Wisconsin Institute for Law and Liberty is the clearest sign yet that Republicans and their allies would prefer to fight that legal battle in front of the state's highest court, where conservatives hold a 4-3 majority.

WILL had previously asked the Wisconsin Supreme Court to agree to a rule requiring all redistricting lawsuits to start there. While justices rejected that request, they left the door open to hearing future redistricting cases.

In its latest petition, WILL asked the Supreme Court to do just that, telling justices that if the governor and Legislature doesn't agree to new maps, justices could redraw the map themselves, "applying the principle of making the least number of changes to the existing maps as are necessary."

That's especially significant because the current maps were drawn by GOP lawmakers and signed by former Gov. Scott Walker in 2011, helping Republicans cement their legislative majorities over the past decade. While the existing maps survived years of court challenges, redistricting experts widely consider them to be among the most extreme partisan gerrymanders in the country.

In a written statement, Rick Esenberg, WILL president and general counsel, said drawing new maps was a state responsibility.

"If the Legislature and governor cannot agree, it is entirely appropriate — even necessary — for the Wisconsin Supreme Court, a branch of state government, to pass a judicial apportionment plan to adopt constitutional maps," Esenberg said.

Critics of the lawsuit said the court should give the Legislature and the governor a chance to arrive at a fair map first.

"The state Supreme Court should not take original jurisdiction over the WILL lawsuit," said Sachin Chheda, director of the Fair Elections Project. "It’s premature, and that body is ill-suited to litigate redistricting issues. This was widely noted in the overwhelming negative response received to WILL’s original request for the state Supreme Court to pre-rig the process with incredibly biased and anti-democratic rules."

While all three redistricting lawsuits are still in the early stages, the federal case filed by Democrats earlier this month has already been assigned to a three-judge panel. The judges who will hear the case include U.S. Appeals Court Judge Amy St. Eve of Illinois, U.S. District Judge Edmond Chang of Illinois and U.S. District Judge James Peterson of Wisconsin. St. Eve was nominated to the court by former Republican President Donald Trump while both Chang and Peterson were nominated by former Democratic President Barack Obama.